These two cytokines share the cytokine subunit p40 and receptor β chain, but have different functions in autoimmune diseases, cancer, and infections.

Stelara/Ustekinumab for IL-12/IL-23 p40 subunit has been approved in 2009 for rheumatic diseases such as psoriasis.

Similarities and differences between IL-12 and IL-23 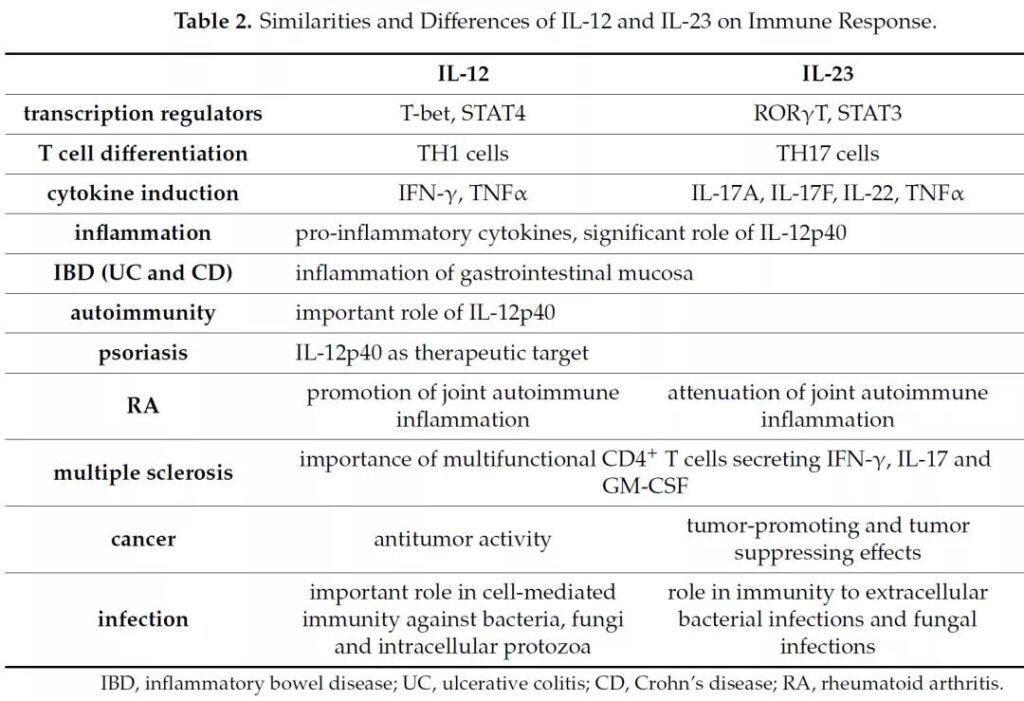 Stelara can inhibit the effects of these two pro-inflammatory cytokines by binding to the p40 subunit shared by IL-12 and IL-23, preventing it from binding to the cell surface receptor IL-12 β1.
Stelara was first approved by the FDA in September 2009 for use in adult patients with moderate to severe plaque psoriasis. The approved indications include: psoriasis; active psoriatic arthritis; Crohn’s disease, etc.

In July 2017, Guselkumab (trade name: Tremfya) produced by Johnson & Johnson was launched in the United States. Because Guselkumab defeated adalimumab and secukinumab in a head-to-head study, it is known as the “best psoriasis drug”. Indications: Psoriasis.

A humanized monoclonal antibody that selectively and high affinity binds to the p19 subunit of IL-23, inhibits its binding to the IL-23 receptor, thereby inhibiting the release of pro-inflammatory cytokines and chemokines.
Ilumetri is produced by the Spanish pharmaceutical company Almirall and is used to treat adults with moderate to severe plaque psoriasis.

In the European Union, Ilumetri was approved in September 2018 and is currently listed in Germany and will continue to be listed in all EU member states. Ilumetri will provide patients with a simple treatment plan. After completing the initial treatment in the 0th and 4th weeks, during the subsequent maintenance treatment, only subcutaneous injections are required every 3 months, that is, only 4 doses per year, which will provide patients with Greater convenience, better disease control, and improved treatment satisfaction.

Risankizumab is produced by AbbVie and obtained a Biologics License Application (BLA) in 2019 for the treatment of patients with moderate to severe plaque psoriasis.

Allergan started two clinical studies of Brazikuumab in 2018 for the treatment of Brazilian inflammatory bowel disease (IBD) to evaluate the safety and effectiveness of this IL-23 inhibitor treatment.

In June 2018, the US pharmaceutical giant Eli Lilly announced at the 2018 Digestive Disease Week (DDW2018) in Washington, the United States that the monoclonal antibody mirikizumab in the treatment of moderate to severe ulcerative colitis (UC) phase II clinical study new Safety and efficacy data. The data showed that in the 12th week of treatment, compared with the placebo group, the mirikizumab treatment group had a significantly higher clinical remission rate.

mirikizumab is a humanized IgG4 monoclonal antibody that targets the p19 subunit that binds IL-23. At present, mirikizumab is being developed for a variety of immune diseases, including psoriasis, UC and Crohn’s disease (CD). Among them, the treatment of moderate to severe plaque psoriasis is in phase III clinical trials.

This new drug, produced by Sun Pharma, can selectively bind to the p19 subunit of IL-23 and inhibit its interaction with the IL-23 receptor, thereby inhibiting the release of pro-inflammatory cytokines and chemokines. After completing the initial dose in the 0th and 4th weeks, a 100 mg dose was injected subcutaneously every 12 weeks. Suitable for adult patients with moderate to severe plaque psoriasis receiving systemic therapy or phototherapy. 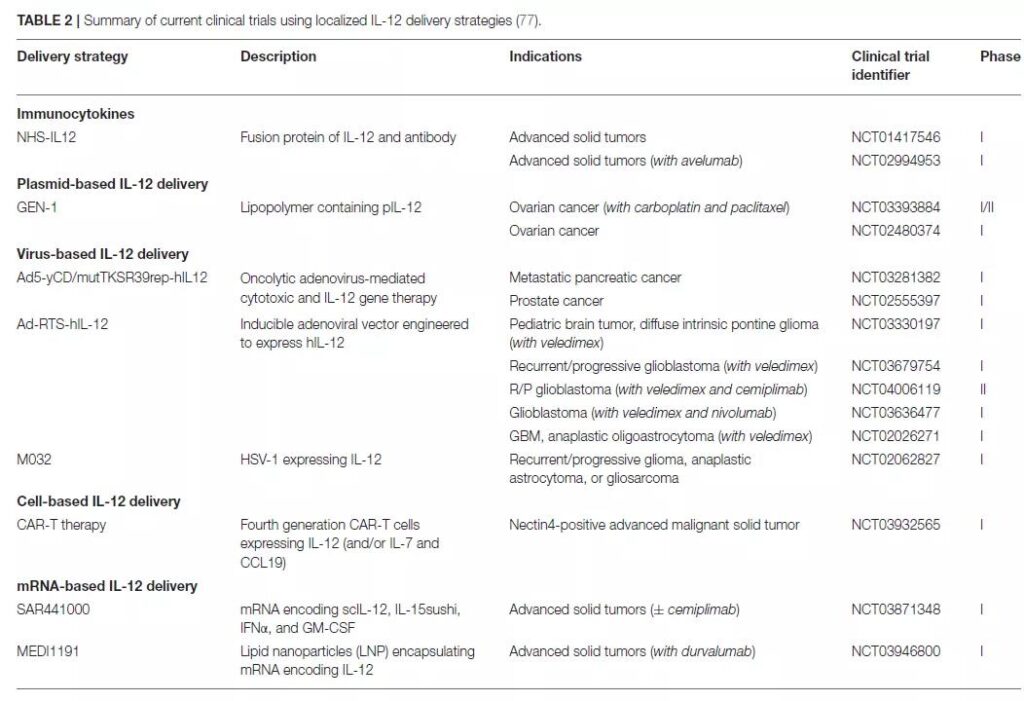 Examples are as follows:

NCT02026271, R&D unit Ziopharm, A Study of Ad-RTS-hIL-12 With Veledimex in Subjects With Glioblastoma or Malignant Glioma, Phase1

There are many members in the IL-12 family, among which IL-12 promotes TH1 differentiation and anti-tumor is the main concern. IL-23 promotes the differentiation of TH17, and autoimmune diseases are the focus.

Of course, it is not absolute. For example, it is now believed that Th1/Th17 phenotype plays an important role in rheumatic diseases, so there may be a crossover between them. The remaining cytokines have not been studied very deeply at present and need to be accumulated more in the future.