Arrhythmia burden of indolent lymphoma: atrial fibrillation is the most common

Arrhythmia burden of indolent lymphoma: atrial fibrillation is the most common.  The results of the study indicate that the risk of arrhythmia in patients with indolent NHL may increase due to treatment.

Because of the long-term natural history of these diseases, the survival rate of patients over several years is often used as a measure. The incidence of arrhythmia in patients with indolent lymphoma is unclear, but recent observations indicate that the problem of arrhythmia is getting worse.

Indolent NHL adults aged 18 years and older who were treated at the Wilmot Cancer Institute at the University of Rochester between 2013 and 2019 were included in the Oncology Cardiology Lymphatic System Malignancy Database and analyzed.

The main purpose of this study is to determine the incidence of arrhythmic events and sudden cardiac death in patients with indolent lymphoma during treatment. According to the ICD-10 code, arrhythmias include ventricular arrhythmias (VT/VF), atrial arrhythmias (atrial fibrillation, atrial flutter, supraventricular tachycardia, and atrial tachycardia), and bradycardia.

Kaplan-Meier survival analysis was used to evaluate the cumulative probability of arrhythmia.

Treatment is divided into chemotherapy, targeted therapy, monoclonal antibody/immunotherapy and combination therapy. There were no significant differences in baseline characteristics between patients receiving treatment and those who had never received treatment.

At 6 months after diagnosis, the cumulative probability of an arrhythmia is 8% (Figure 1). 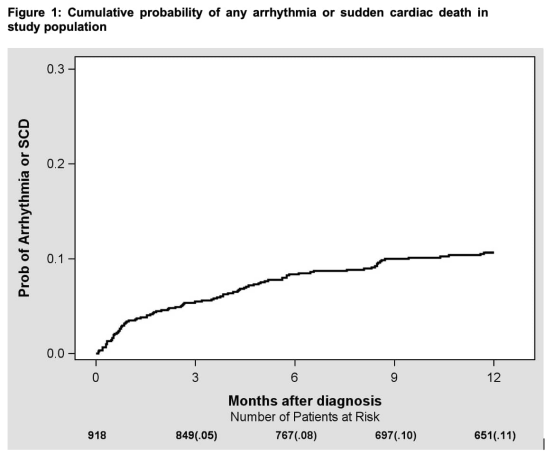 The results of the study indicate that the risk of arrhythmia in patients with indolent NHL may increase due to treatment.

Atrial fibrillation is the most common arrhythmia found in this study, and appears to have increased compared with the incidence in the general age-matched population (1-1.8 cases per 100 people per year).

Of the 80 deaths, 8 (10%) were attributed to sudden cardiac death. This data provides important information that can help identify patients with increased cardiovascular morbidity and mortality.

Prospective monitoring of these patients may better determine the incidence and related risks of arrhythmias.

Future research will focus on the risk factors of arrhythmia, and develop a method to prevent and treat arrhythmia in the indolent NHL patient population.

Arrhythmia burden of indolent lymphoma: atrial fibrillation is the most common