The neuroprotective effect of caffeine in hypoxic-ischemic events

The neuroprotective effect of caffeine in hypoxic-ischemic events.  Low doses of caffeine can reduce ischemic damage to immature CNS, indicating that inhibition of A2A receptors is more effective in preserving CNS cells than stimulation of A1.

Hypoxic-ischemia (HI) is a partial or systemic, temporary or permanent interruption of blood flow and oxygen supply, which can lead to insufficient supply of glucose and oxygen. The human body’s nervous tissue is highly active, and it closely relies on glucose and oxygen to meet metabolic needs. Therefore, ischemic diseases can lead to nerve cell death and secondary nerve cell damage, which can cause nerve dysfunction and have long-term consequences.

During prenatal development, HI can be caused by placental insufficiency, prolonged labor, or folds of the umbilical cord. Other risk factors include maternal anemia, hypotension, multiple births, smoking, drug abuse, preeclampsia, and bleeding.

The occurrence of HI during the prenatal and perinatal period will change the development of the fetal central nervous system, and the different types, strengths and locations of the injuries will lead to different results. HI events may not only lead to the death of newborns, but also the main trigger of encephalopathy and permanent brain damage in children.

Studies have shown that perinatal hypoxic-ischemic encephalopathy (HIE) affects 1‰-3‰ of full-term infants, of which 15-20% die after birth, which is one of the most important causes of neonatal death; surviving 25% of them will have permanent neurophysiological effects.

Although modern neonatal medicine has made great progress, the proportion of infants diagnosed with neurological impairment after the occurrence of HIE in the perinatal period has not decreased. In premature (or underweight) newborns, this number is even more so Shockingly, the incidence of perinatal suffocation is about 60%, and 20%-50% of infants with HI develop defects afterwards, such as inattention, cognitive delay (visual, motor, and perceptual impairment), Hyperactivity and other severe cases may even have epilepsy and cerebral palsy. At present, the effective measures that can be prevented or treated are limited [1].

Caffeine may be a neuroprotective agent in hypoxic-ischemic events

Adenosine is a nucleoside that acts as a neuromodulator in the central nervous system (CNS). It mainly acts through four receptors (A1, A2A, A2B, A3), of which A1 and A2A are the most abundant adenosine receptors in the CNS. A large number of studies have shown that adenosine receptors play an important role in hypoxic-ischemic diseases, such as antagonizing A2A receptors and activating A1 receptors to protect against ischemic injury; in different cerebral ischemia models, A2A is affected Inhibition/absence of the body will trigger an important neuroprotective effect, which makes the inhibition of A2A receptors expected to be a beneficial tool in prevention and treatment [1]. 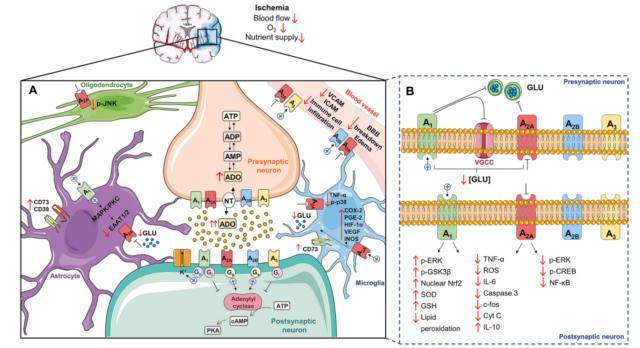 The role of adenosine receptor regulation in hypoxic-ischemic events

Caffeine has been used clinically for more than 30 years and is the first choice for the treatment of apnea in premature infants. It is a kind of adenosine receptor antagonist and can non-selectively antagonize the three receptors A1, A2A and A2B. 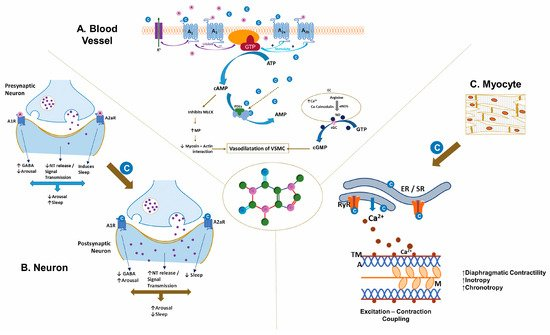 Low-dose caffeine can reduce ischemic damage to immature CNS, indicating that inhibiting A2A receptors is more effective in preserving CNS cells than stimulating A1; in addition, due to the activity of A2A during ischemia, caffeine can not only target It acts on neurons, and can also act on almost all CNS cells (such as endothelial cells, microglia, astrocytes and oligodendrocytes), which may prolong the survival period of these cells [1]. Bona’s research shows that caffeine can reduce brain damage in mice after HIE [2]; in the perinatal brain injury model, caffeine has shown neuroprotective effects on periventricular white matter injury (PWMI) and HIE; Schmidt Studies have shown that the incidence of cerebral palsy in infants treated with caffeine is significantly lower than that of the control group [3].

At present, neonatal care is the main burden of health systems around the world. The damage caused by HIE is related to high morbidity and mortality. It requires the highest level of intensive care unit (NICU) care and intervention, and consumes a lot of medical resources. In order to reduce the national medical burden and escort premature newborns, caffeine is a “silver bullet” in the field of neonatal treatment. Based on its pharmacological effects, whether it is expected to become a new choice for the prevention and treatment of HIE remains to be further clinically verified.