WHO chief scientist: Soumya Swaminathan may face death penalty charges for not approving the use of ivermectin to treat COVID-19?

It is worth mentioning that in April this year, the WHO expert who predicted that India’s actual infection was 20 to 30 times the official figure is Swaminatan.

According to reports from the Indian “The Print” news network and the independent global health news website “Healthpolicy-Watch”, the “India Bar Association” (IBA) issued a law to Swaminathan on May 25 this year. The statement accused her of “initiating a false propaganda campaign against ivermectin” and “inducing the public to refuse to use ivermectin” to treat COVID-19.

The “India Bar Association” (IBA) is a voluntary organization of the Indian legal industry and has no actual regulatory powers. However, in this 51-page legal statement, the wording of the “Indian Bar Association” is rather fierce and proposes 71 reasons to attack Swaminatan’s evaluation of ivermectin as “extremely unreasonable” and “have another purpose”. It is to use her special position in the health field for personal gain and claim that Swaminatan wants to serve India. The deceased of COVID-19 pays the price.

The association even called for the use of articles 302, 304 (paragraph 2), and 88 of the Indian Penal Code that point to murder and other crimes to punish Swaminathan. According to relevant laws, if Swaminatan is convicted, she will face the death penalty or life imprisonment. 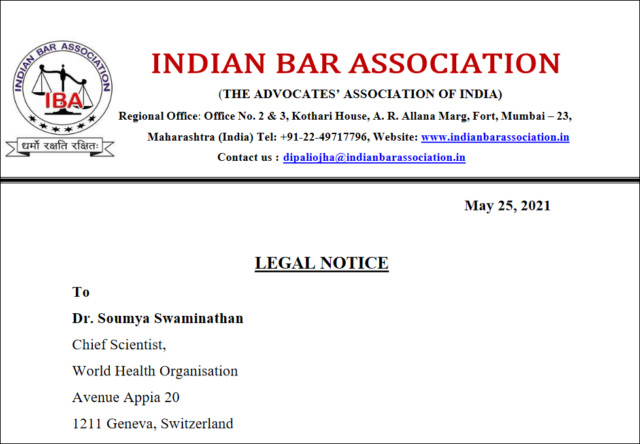 Ivermectin is a broad-spectrum antiparasitic drug, which has been included in the WHO list of essential drugs for several parasitic diseases. However, its therapeutic effect on the COVID-19 has always been controversial, and neither the WHO nor the U.S. Food and Drug Administration (FDA) has approved the drug for the treatment of COVID-19.

On March 31 this year, the WHO issued a statement stating that the use of ivermectin to treat patients with COVID-19 pneumonia is still inconclusive. Until more data is available, the WHO recommends that the drug be used only in clinical trials.

The ivermectin manufacturer and the well-known American pharmaceutical company Merck & Co. also believe that there is no scientific evidence to prove that ivermectin has a therapeutic effect on COVID-19. As early as in a statement issued on February 4 this year, the company emphasized that based on existing evidence, we do not support the use of ivermectin in dosages and targets beyond the scope of regulatory approval. 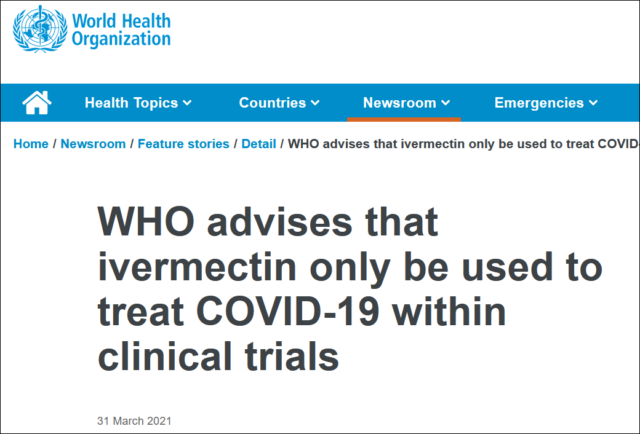 Despite this, there are still many fans of Ivermectin therapy, such as the Front Line COVID-19 Critical Care Alliance (FLCCC), a non-profit organization in the United States.

The organization said that some studies have shown that the use of ivermectin can reduce the risk of infection with COVID-19 by more than 90% and the mortality rate by 68-90%. In a statement in mid-May this year, they also publicly criticized the negative evaluation of ivermectin by European medical institutions and the WHO, and even speculated that the WHO had already set a target to “ban ivermectin.” “.

In addition to organizations in the United States, the health department of Goa, India also believes in its efficacy. The state approved an ivermectin-based COVID-19 treatment plan on May 10, recommending all residents over 18 to take 5 tablets of ivermectin medicine, and said that this action can prevent the fatal high fever caused by COVID-19.

At the same time that Goa introduced the policy, Swaminatan tweeted to reiterate the view of the WHO, “No matter what kind of medicine is used to treat the disease, safety and effectiveness are very important. Except in clinical trials, the World The WHO does not recommend the use of ivermectin in the treatment of COVID-19.”

It was this tweet that allowed Swaminatan to be caught. The “Indian Bar Association” wrote in the legal statement:

“Your misleading tweet against the use of ivermectin on May 10 this year led to Tamil Nadu to exclude ivermectin from the coronavirus treatment regimen on May 11, despite the fact that this drug was being treated before. On the drug list.”

“The world has gradually realized that you use the’scientific method’ to describe fabricated facts. This method is absurd, arbitrary, and ridiculous. The WHO claims to be’omniscience’, but this is like a vanity emperor wearing a new Clothes, and the whole world only now knows that the emperor has no clothes to wear at all.”

At that time, Dipali Ojha, the head of the legal team of the “Indian Bar Association”, further threatened, “Issuing a legal statement is only the first step, and we must continue to move forward.”

Although Swaminathan deleted the tweet after receiving the legal statement, the association apparently did not cease fire. On June 5th, they updated the news on the website again-“The action of deleting the tweet just proved her maliciousness.” “Deleting this tweet will not save her and her colleagues. We will support the citizens to initiate criminal actions.” litigation.”

However, it is not clear whether the organization has formally filed a lawsuit.

The WHO said in a response statement that they “regret” the unprovoked attacks on senior officials. The WHO added that although the association has announced the so-called lawsuit, they do not know whether the relevant lawsuit has been filed.

“WHO’s evaluation of ivermectin for the treatment of COVID-19 is based on current scientific evidence. The WHO guidelines are developed by an independent global guideline development team and are updated regularly as new data becomes available,” WHO 1 Said a spokesperson.

Swaminathan is an Indian pediatrician, clinical scientist, well-known for tuberculosis research, and has served as the chief scientist of the WHO since March 2019.

It is worth noting that just one month before the “Indian Bar Association” issued its first legal statement, she said in an interview with CNN on April 26 that due to limited detection capabilities, the epidemic in India was affected. The situation is “seriously underestimated”, and the actual number of infections in India may have reached 20 to 30 times the official reported figure.