COVID-19 mutates 40 times within 318 days after the patient was infected.  After 318 days of infection, the body mutated 40 times! The longest COVID-19 case reveals the “super evolutionary history” of the new coronavirus

When the novel coronavirus (SARS-CoV-2) pneumonia (COVID-19) epidemic first spread globally, almost everyone looked forward to the emergence of vaccines and drugs as soon as possible to end the epidemic. However, as the virus continues to mutate, mutant strains with higher infectivity or more deadly emerge in an endless stream, and this fight against the epidemic is far from reaching the end.

According to an internal report from the Centers for Disease Control and Prevention (CDC), the basic infectious value (R0) of the Delta mutant strain is 5-9.5, far exceeding the 1.5-3.5 value of the original strain, and the transmission speed is equivalent to that of chickenpox. At the same time, vaccines are also difficult to stop the virus. Among the 162 million vaccinated Americans, there are about 35,000 symptomatic breakthrough infections every week. The risk of infection with the Delta strain of vaccinated people is only higher than that of those who have not been vaccinated. Reduce by 3 times.

Humoral immunity and cellular immunity are the two important lines of defense for the human body against the invasion of foreign viruses, as well as two important ways for the COVID-19 vaccine to work. Among them, the humoral immune mechanism can recognize and capture viruses in body fluids and destroy them; while cellular immunity is the last line of defense of the human body, mainly by T cells to “chase” the “fish that slip through the net” outside the first line of defense. Previous studies have shown that most viral mutations are accumulated in the absence of humoral immune response, and there are still few studies on the role of cellular immunity in viral evolution.

Recently, researchers from Russia’s Smorodintsev Institute of Influenza and Skoltech University jointly published an article entitled “SARS-CoV-2 escape from cytotoxic T cells during long-term COVID-19” on the preprint platform “Research Square”. The article analyzes the data of a cancer patient who has been infected with SARS-CoV-2 for 318 days and has a weakened immune function, revealing the mechanism of virus mutation to escape cellular immunity. 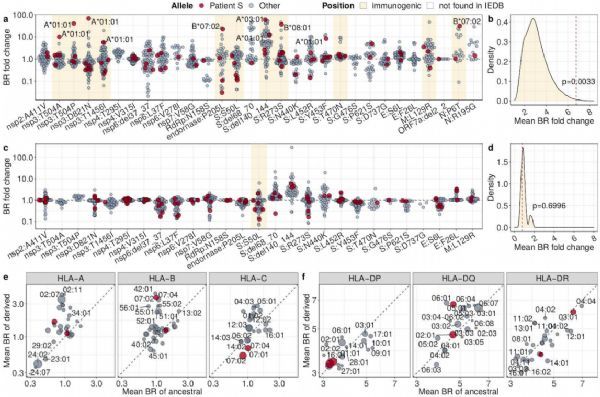 The protagonist mentioned in this report is a female patient diagnosed with advanced non-Hodgkin’s diffuse large B-cell lymphoma, who was tested positive for SARS-CoV-2 for the first time on April 17, 2020, and was infected. Lasts until March 2021. During the infection period, the patient developed severe COVID-19 twice, lasting for 3 months and 2 months respectively, and the researchers isolated live virus from the patient’s 6 nasopharyngeal swab samples during these two periods.

The genetic sequencing results of these 6 nasopharyngeal swab samples showed that the strains of the same lineage caused this patient to fall into a severe state twice. The virus mutated continuously in patients, and eventually accumulated 40 mutations, far exceeding the evolution rate of SARS-CoV-2 in the general population, indicating that the virus has adapted to the human environment. These mutations are distributed throughout the viral genome and affect 18 of 26 viral genes, of which 8 mutations occur in the spike (S) protein gene.

What is puzzling is that because this patient received multiple cycles of chemotherapy under several different regimens including rituximab, this caused the patient’s humoral immunity to almost “failure”. In that case, why does the virus still suffer? So many mutations happened? Is it to avoid the cellular immune mechanism?

Flow cytometry analysis showed that the researchers did detect a significant SARS-CoV-2 specific T cell response during the patient’s severe COVID-19. In further analysis, the researchers explored whether the accumulated mutations affected the presentation of allogeneic antigen HLA, and found that 12 acquired mutations reduced or prevented the expression of HLA class I alleles, the latter being CD8+ The co-stimulatory molecules of T cells indicate that the virus mutation caused the immune escape of SARS-CoV-2 to CD8+ T cells, resulting in low T cell response efficiency.

These results indicate that evolution within the host can indeed promote the escape of SARS-CoV-2 to cytotoxic T lymphocytes. This may be an underestimated factor in the evolution of SARS-CoV-2 and should be taken seriously.

The author of the report, Georgii Bazykin of Skoltech University, said: “Considering the SARS-CoV-2 variants that have spread recently, their origin may be somewhat unusual. When such variants begin to brew, they usually accumulate rapidly. Mutations, just like the viruses we have seen in this study evolve in immunosuppressed individuals. This may mean that some special cases will become viral’gyms’, making them better evolve to meet the needs of infecting the human body. Although the mutant strain in our report has not been spread, it also shows that the training places for virus evolution are more diverse than we thought.”