The results showed that compared with patients receiving chemotherapy, patients receiving Imfinzi+tremelimumab+ chemotherapy showed a statistically significant and clinically significant improvement in overall survival (OS) and progression-free survival (PFS) (28% improvement in PFS) , OS improved by 23%). The results show that adding a short course of tremelimumab to the Imfinzi+ chemotherapy regimen can improve the prognosis of patients without increasing treatment interruption.

Susan Galbraith, Executive Vice President of Oncology Research and Development of AstraZeneca , said: “POSEIDON research data has enabled patients to further benefit from Imfinzi. This is an important verification of our exploration of the new combination development strategy.

For patients who have already received chemotherapy, a short course of treatment is added to Imfinzi. Tremelimumab, compared with chemotherapy alone, reduces the risk of cancer progression or death by 28%. The results of the study also show that the significant improvement in survival rate in the first-line treatment of patients with metastatic non-small cell lung cancer does not affect tolerance. We Looking forward to discussing these data with regulators.”

In this study, the safety of each Imfinzi combination regimen was consistent with the known safety of a single drug, and no new safety signals were found. 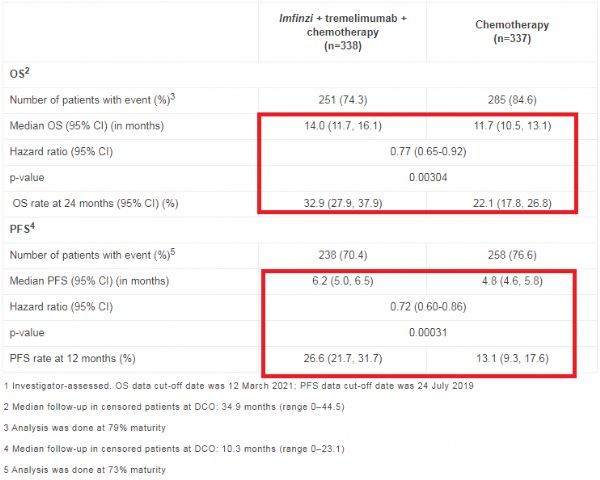 Imfinzi is a human monoclonal antibody that binds to programmed cell death factor ligand 1 (PD-L1), blocks the interaction of PD-L1 with PD-1 and CD80, resists tumor immune evasion strategies and releases immunity Inhibition of the reaction.

Based on the results of the Phase 3 PACIFIC study, Imfinzi is the only immunotherapy approved for curative treatment in patients with unresectable locally advanced (phase III) NSCLC after chemotherapy and radiotherapy, and has now become the global standard of care . In addition, based on the results of the Phase 3 CASPIAN study, Imfinzi has also been approved for the treatment of extensive-stage small cell lung cancer (ES-SCLC) in many countries around the world.