China’s first approved CAR-T drug-Akirensai injection (Yikaida), was approved for marketing in June this year. This anti-cancer drug is a “CAR-T” therapy, which is the first application in China. Immune cells in the human body are used to treat tumors.

However, the price of 1.2 million yuan per dose still surprised many people.

According to Health Times, on August 26, the first case of CAR-T-treated lymphoma patient in China was discharged from Shanghai Ruijin Hospital.

In June 2019, Ms. Chen was diagnosed with diffuse B large cell tumor, and hearing the news was like a bolt from the blue.

After two months of treatment with Akirensai injection, Ms. Chen found that there were no cancer cells in the body temporarily and the symptoms were completely relieved. A drug sales order for the outflow of Achilles injection shows that the retail price of the product is 1.2 million yuan per bag.

In fact, according to Phoenix Health News, the first patient in the world to receive CAR-T cell immunotherapy, Emily Whitehead, was treated in 2012 and the cancer has not recurred for six consecutive years, so he was elected as the cover character of Nature magazine in 2017. , This year also ushered in the ninth year of cancer-free survival.

What is CAR-T therapy? Can it cure all cancers?

CAR-T (Chimeric Antigen Receptor T, chimeric antigen receptor T cell) therapy is to activate the recognition ability of T cells in the human immune system through genetic modification, so that T cells can accurately detect cancer cells and activate autoimmunity to “clear” cancer. Cells are currently one of the tumor immunotherapy technologies that have made breakthroughs in the world. 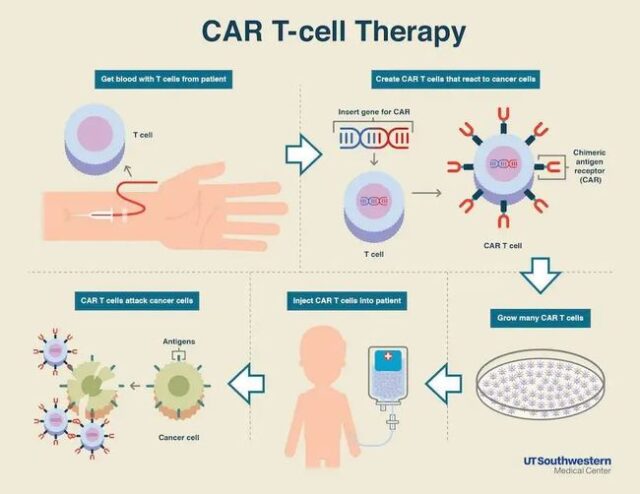 Although CAR-T therapy is relatively unfamiliar to most people, it is indeed the “net celebrity” in the current tumor treatment field. CAR-T is a “living drug” made from the body’s own immune cells. By adding a CAR gene to the patient’s T cells, the T cells can be modified to recognize and kill cancer cells in the patient’s body, and to obtain autoimmune reconstitution, thereby realizing the possibility of cure.

In the patient’s body, once they encounter tumor cells expressing the corresponding antigen, CAR-T cells will be activated and re-expanded, exerting their great specific killing power and destroying tumor cells.

CAR-T therapy has greater advantages compared with traditional drugs, monoclonal antibodies, and small molecule targeted drugs. One infusion, no need to repeat administration. For patients with advanced lymphoma without effective treatment, the traditional treatment plan only survives about half a year. This Akirensai injection can achieve an overall effective rate of about 80% and bring lasting remission, nearly half of them The patient can survive for more than 4 years, with the possibility of clinical cure.

At the same time, Akirensai injection is also the CAR-T drug that benefits the largest number of patients in the world. It can be said that CAR-T cell therapy is truly the “nemesis” of cancer.

At present, which diseases are mainly suitable for the treatment of CAR-T technology?

At present, this therapy mainly treats tumors of the blood system. “For example, the therapeutic effect of leukemia, lymphoma, and multiple myeloma is relatively good, but the effect on other cancers is not yet certain.”

CAR-T therapy is currently approved in China for only recurrent diffuse large B-cell lymphoma, and it is not recommended for patients with newly diagnosed lymphoma.

Clinical trials for leukemia and other blood system diseases are being extensively carried out, which will benefit more patients with hematological tumors in the future. For solid tumors, the clinical effect of CAR-T therapy is not as good as that of hematological tumors.

Like other anticancer drugs, CAR-T therapy also has side effects. Director Liu Yao introduced, “The most important ones are cytokine storm and neurotoxicity.

At present, the side effects of CAR-T are controllable, and ordinary doctors can deal with it in a timely manner, and the overall treatment effect is still relatively good. “

Why is this anticancer drug so expensive?

“CAR-T is a personalized customized cell therapy. Each patient’s CAR-T cells need to be produced in separate batches.

CAR-T is mainly expensive in the preparation process. The preparation process requires strict quality control and quality inspection, and the entire process takes one month. “Liu Yao, director of the Hematology Oncology Center of the Cancer Hospital of Chongqing University, introduced in an interview with reporters.

The five CAR-T therapies currently on the market are all “outrageously expensive”. The U.S. Food and Drug Administration (FDA) has approved Novartis’ Kymriah, Gilead’s Yescarta and Tecartus, Bristol-Myers Squibb’s Breyanzi and Abecma 5 CAR-T therapies. These products are priced at between 373,000 U.S. dollars and 475,000 U.S. dollars. between.