In a new study, researchers from the Stanford University School of Medicine suggest that what many envisioned as a two-in-one approach to improving the treatment of certain blood cancers may be more challenging to implement than previously anticipated.

Relevant research results were published online in the journal Nature Medicine on July 26, 2021, with the title ” CAR T cells with dual targeting of CD19 and CD22 in adult patients with recurrent or refractory B cell malignancies: a phase 1 trial”. 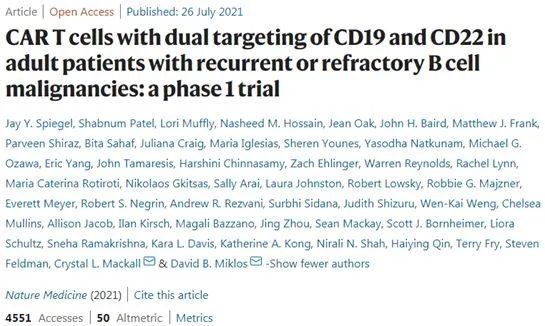 This treatment, called CAR-T cell therapy, takes a patient’s own T cells and genetically modifies them so that they can recognize CD19 expressed on the surface of cancer cells to seek out and attack the cancer.

It has been approved by the U.S. Food and Drug Administration (FDA) to treat several types of blood cancers.

Although this treatment is often initially successful, more than half of patients eventually relapse.

The authors investigated whether targeting both molecules, CD19 and CD22, at the same time would make it more difficult for cancer cells to evade treatment.

But they found it difficult to engineer CAR-T cells that were equally effective against every target.

“That’s the importance of doing careful clinical trials,” said Dr. Mackall. “In some ways, we’re back to square one. But we’ve learned a lot about how to overcome these challenges and which patients are most likely to benefit from CAR-T cell therapy. Knowledge that benefits.”

In particular, the authors found a correlation between the density of target molecules on the surface of cancer cells and the likelihood that a patient would respond well to CAR-T cell therapy. They also devised a method to assess the function of genetically engineered CAR-T cells before they are administered to patients.

“Until now, it has not been possible to predict which patients will get worse and which will not. This is an important clinical step,” Dr. Miklos said.

CAR-T cell therapy targeting CD19 was first approved by the FDA in 2017 to treat children and young adult patients with a type of blood cancer called acute lymphoblastic leukemia (CLL).

Since then, it has also been approved to treat adult patients with other blood cancers, including multiple myeloma and several types of lymphoma.

For many patients, this is transformative, leading to rapid improvement and even cure. However, about half of the patients who received the treatment got worse. 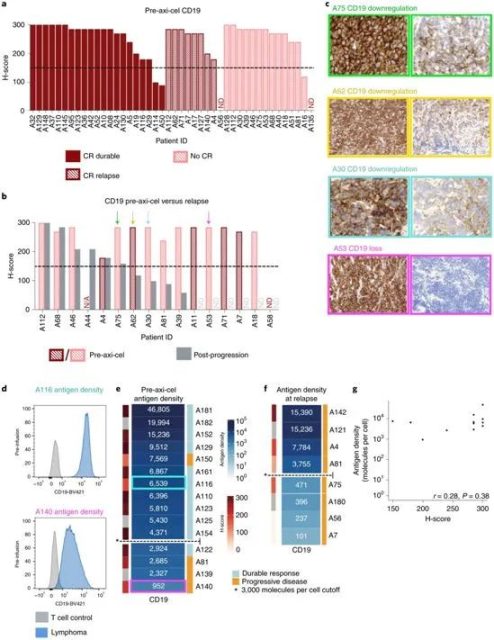 Studies of leukemia patients have shown that cancer cells gain the upper hand by reducing the density of CD19 on their surface, making it harder for genetically engineered T cells to recognize them.

While it’s unclear whether the same is true for lymphoma patients, many scientists speculate that targeting two or more cancer-related molecules, such as CD19 and CD22 or CD20, or all three, might make cancer cells more It is difficult to escape treatment.

Of these 44, 39 (89%) were considered CD19-positive by expressing significant levels of CD19 on the surface of cancer cells prior to treatment as judged by current standard clinical tests.

Of these patients who relapsed, 60 percent who were initially CD19-positive had converted to either CD19-negative or low CD19 levels at the time of relapse, suggesting that these lymphoma cells evaded treatment in the manner of leukemia cells.

In a further investigation, the authors used a technique developed at Stanford called flow cytometry to quantify the amount of CD19 molecules on the surface of individual cancer cells and found that there was a clear difference between patients who later relapsed and those who were successfully treated. difference before.

“Using this new method to assess the density of target molecules in clinical samples will allow us to provide more personalized therapies and increase the likelihood that some patients will benefit,” Miklos said.

They designed and created CAR-T cells that target both CD19 and CD22, so-called bispecific CAR-T cells, and in a study targeting 38 patients with B-cell acute lymphoblastic leukemia (B-ALL) or large Its effectiveness was tested in clinical trials in adult patients with B lymphoma.

However, as with current standard CAR-T cell therapy, a significant proportion of patients relapsed.

“Many of these deteriorating patients experienced downregulation of CD19, but not CD22,” Miklos said. “Once again, this bispecific CAR-T cell therapy failed due to reduced CD19 on the surface of the cancer cells.”

These results suggest that this bispecific CAR-T cell preferentially recognizes CD19 rather than delivering the double whammy these authors hoped.

In fact, tests of these cells in lab dishes showed that they secreted more immune-signaling molecules, called cytokines, in response to CD19 than they did in the presence of CD22.

Despite the results, Mackall, Miklos and their colleagues did not abandon CAR-T cells that recognize more than one target molecule.

“It’s really important to understand why things fail,” Mackall said. “It’s great to have a breakthrough, and 30 percent of the patients in this clinical trial looked cured. But what about the other 70 percent? Why did they fail? Now we know that about two-thirds of these failures are due to cancer cells being able to modulate the levels of antigens or target molecules on their cell surface. We know that testing these cells for their ability to produce cytokines may indicate which CAR-T cells Probably the most effective at eliminating blood cancers.”

The authors will continue to investigate how to construct bispecific CAR-T cells that bind equally to each target molecule. “We’re trying to make a better capture artifact,” Mackall said. “No single target is perfect. Most patients don’t have CD19, CD22, and CD20 on their surface at the same time. However, most of them will. There are at least two. I believe that in the future we can ask, ‘What did this patient’s tumor look like?’ and tailor our approach to each individual. Because there are only so many opportunities to do it right for this patient treat.”