According to news from Tokyo-News, Foreign substances found in Pfizer COVID-19 vaccine in three Japanese cities.

The lot number is “FF5357“, which is the same as the product in which foreign matter was found in Kawagoe City, Sakai City, Sagamihara City, etc. Fujimino City was a different number. Both have requested analysis from Pfizer. 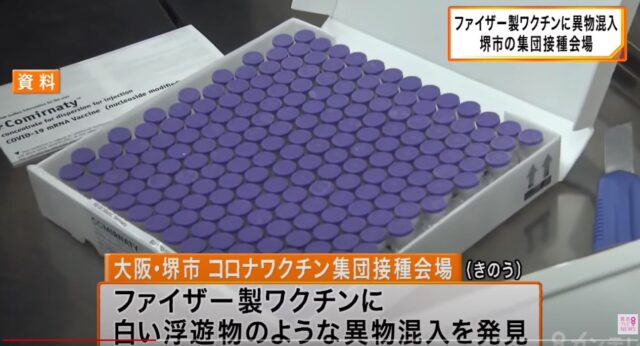 According to news from Kawagoe City, around noon on the 12th, a pharmacist who tried to dilute the vaccine and transfer it to a syringe found a white floating substance in the bottle and stopped using it. Others with the same lot number were used after confirming that there were no foreign substances.

Twenty-two boxes (about 25,000 doses) with the same lot number were delivered to the city on August 24, and are used at two mass inoculation sites and about 100 medical institutions.

In Fujimino City, a medical worker preparing a vaccine noticed a white floating substance in a bottle on the morning of the 14th.

Hino City, Tokyo, announced on the 15th that a foreign substance was found in one Pfizer vaccine at a clinic inoculating a new coronavirus vaccine. It was the same lot number as when a foreign object was found in Sakai City.

Metal particles were found to be mixed with naked eyes. After investigation, it was judged that it should be stainless steel scraps from the production line machine. .