A highly controversial paper: The longer your life expectancy will be if your diet is more salty?

A highly controversial paper: The longer your life expectancy will be if your diet is more salty?

Many studies believe that excessive intake of table salt (NaCl) is an unhealthy lifestyle because it has been found to be strongly associated with a high risk of chronic inflammation, cardiovascular disease and autoimmune diseases. However, how much salt should I eat every day? There is no accurate statement.

However, many things often have two sides, and the high-salt diet is no exception.

A discovery that disrupts cognition

In December 2020, Franz Messerli and others from the University of Bern, Switzerland, published a report entitled “Sodium intake, life expectancy, and all-cause mortality” in the European Heart Journal. Clinical research papers.

The study counted data from 181 countries/regions and found that the increase in sodium intake across the country is associated with an increase in average life expectancy and a decrease in all-cause mortality.

After adjusting the factors such as GDP and average body mass index of each country, increasing the intake of 1 gram of sodium (equivalent to 2.5 grams of salt) per day will increase the healthy life expectancy at birth by 2.6 years, and by another 0.3 years at the age of 60. , The all-cause mortality rate was reduced by 131 people per 100,000 people.

In other words, the saltier you eat, the longer the healthy life expectancy, and the lower the risk of death. 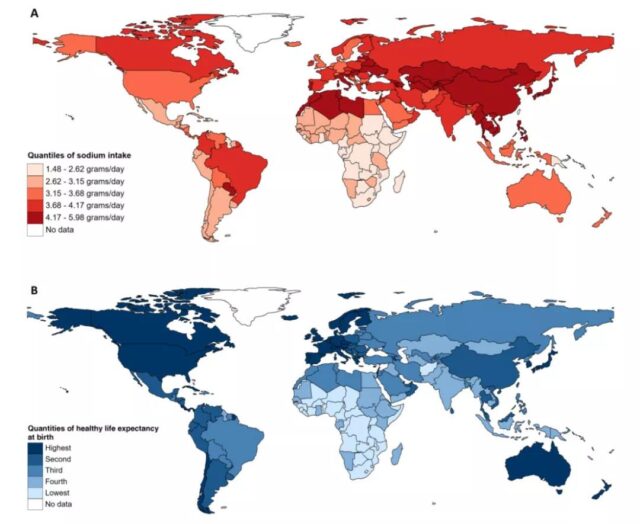 After excluding influencing factors such as GDP and average body mass index of various countries, the research team found that, overall, the increase in sodium intake was related to the increase in healthy life expectancy and the decrease in all-cause deaths. 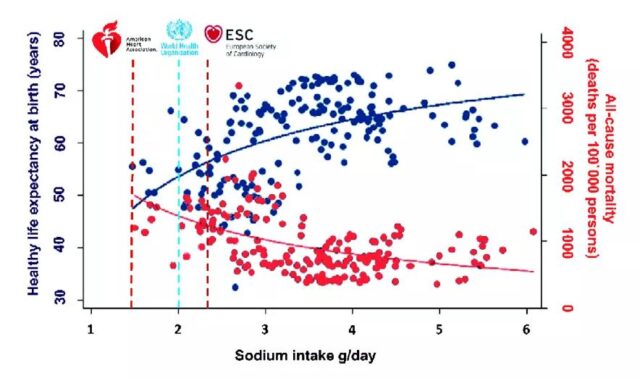 Recommendations of the research team

The research team said that the results of this study refute that dietary sodium is the chief culprit in shortening lifespan or a risk factor for premature death.

Most people in the world have a moderate daily intake of sodium, with 2.3 grams to 4.6 grams of sodium per day (equivalent to 5.8 grams to 11.6 grams of table salt).

Many studies have shown that a high-salt diet is related to the risk of cardiovascular disease, but This risk increases only when the daily sodium intake exceeds 5 grams (equivalent to 12.6 grams of table salt).

Therefore, the research team believes that those who do not have high blood pressure need not deliberately reduce salt intake according to the above guidelines.

Franz Messerli, the leader of the study and the corresponding author of the paper, said that this paper is the most rejected paper in his research career. The manuscript was rejected 8 times in a row before it was accepted and published by the European Heart Journal.

Although the paper was published, it has not been dispelled. Some researchers believe that there are too many variables involved in this study to infer causality.

Special reminder: This article only interprets the relevant research progress truthfully and does not constitute any suggestions.

Your life expectancy will be longer if your diet is more salty?