Bolton: “Trump was reluctant to take the COVID-19 virus seriously from the begJohn Bolton Blames Trump for COVID-19 Deaths

[Global Network] “Russia Today” (RT) published an interview with former US President Trump’s assistant, former US national security adviser John Bolton on the 16th. Bolton accused his “old club” Trump Responsible for the failure of the United States to prevent the epidemic.

RT stated that in an interview with RT reporter Afsin Latense, Bolton remained loyal to his “hawkish” foreign policy views. Bolton talked about the recent withdrawal of US troops from Afghanistan, the rampant branch of the extremist organization “Islamic State”, the sanctions imposed by the United States on Iran, and the COVID-19 epidemic. 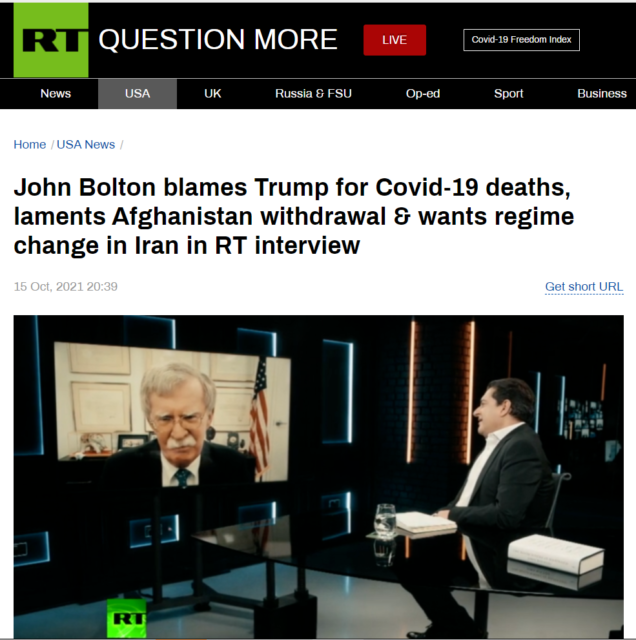 RT: In an interview with RT, John Bolton blamed Trump for the issue of COVID-19 deaths, lamented the withdrawal of troops from Afghanistan, and expressed the hope that the Iranian regime would change

According to Bolton, both governments have underperformed on the issue of Afghanistan. According to the report, Bolton believes that the Trump administration’s peace agreement with the Taliban in Afghanistan “is flawed in many aspects,” and the Biden administration ignored the warnings of the Pentagon, the State Department and the White House and continued to advance the agreement.

Bolton continued to claim, “This means that the United States is retreating from the international arena, and Biden has believed this since at least 2009. Ironically, Trump also believes this. I think this is something for the United States. A mistake is also a mistake for global stability, and of course it is also a mistake for the Afghan people.”

As for the COVID-19 epidemic, which caused the deaths of more than 700,000 Americans, Bolton blamed the 45th president, Trump, for the United States’ ineffective epidemic prevention.

RT said Bolton was often accused of disbanding the Epidemic Prevention Department of the National Security Council, which has planted the seeds for some ineffective responses. In the spring of 2018, the then Trump administration and the new White House National Security Council Chairman Bolton jointly disbanded the working team responsible for the epidemic response and dismissed the team’s leaders and staff.

In an interview with RT, Bolton replied that he did not dissolve the department, but “did a very responsible bureaucratic level: I merged it with the biological weapons department of the National Security Council.”

Bolton insisted that the department had completed its work and issued a red flag in January (2020), but he also stated that “Trump was unwilling to take the COVID-19 virus seriously at the beginning because of election matters.” problem lies in.