Aging: The catechol in green tea may enhance the body’s health and prolong life. Green tea is believed to promote health and longevity due to its high amount of antioxidants.

Recently, in a research report published in the international journal Aging, scientists from Jena-Friedrich-Schiller University and other institutions questioned the previous mechanism of these components.

We all know the benefits of green tea. In particular, it contains catechols called ECG and EGCG, which are believed to extend the life of the body.

These two substances are polyphenolic compounds, which are well-known antioxidants, which means that they can neutralize or prevent the oxidative stress caused by the aggressive free radicals generated by oxygen to the body. 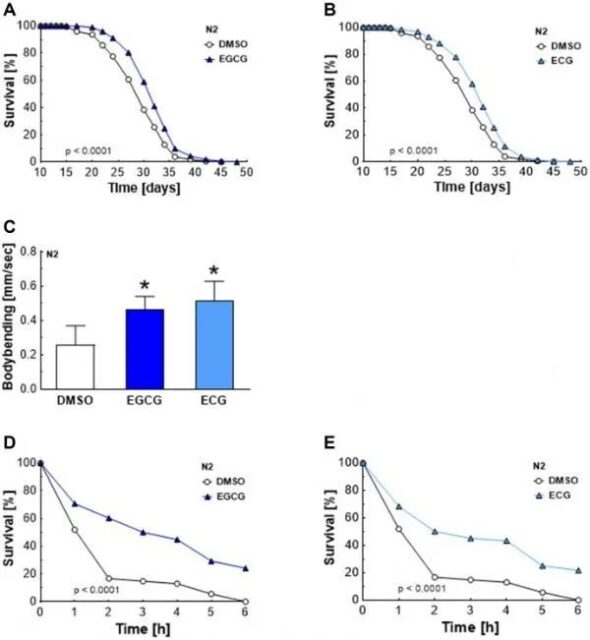 EGCG and ECG treatment can prolong the lifespan, exercise activity and anti-stress ability of the body.

So far, researchers believe that catechol can neutralize these free radicals and prevent their damage to cells or DNA. A major source of oxygen free radicals is the body’s metabolism. For example, mitochondria, the energy factory of cells, produce energy when they work.

In this research report, the researchers carefully studied and analyzed how catechins play a role in the body of Caenorhabditis elegans, so they came to a different and seemingly contradictory research conclusion, namely, the catechol in green tea It will not inhibit oxidative stress, but will promote the progress of oxidative stress.

Researchers pointed out that these polyphenols from green tea will initially increase the level of oxidative stress in a short period of time, but this will subsequently have the effect of increasing the defense capabilities of cells and organisms.

Therefore, the catechols in green tea may cause Nematodes that are fed live longer and have stronger physical fitness.

This means that green tea polyphenols or catechols are actually not an antioxidant, but a pro-oxidant that can improve the self-defense ability of the organism, similar to vaccination.

However, this increase in defense capabilities is not achieved by the immune system, but by activating genes that produce specific enzymes, such as superoxide dismutase (SOD) and catalase (CTL); positive It is these enzymes that inactivate free radicals in the nematode body, which are basically endogenous antioxidants.

As early as 2009, researchers discovered that exercise promotes the health of the body because it can increase the body’s oxidative stress in a short period of time, thereby improving the body’s defense capabilities; and taking in fewer calories can also produce the same effect, and this It has been confirmed many times in animal studies.

Mice fed a reduced-calorie diet tended to live longer than mice fed a normal high-calorie diet, so the catechols in green tea seem to work in a similar way.

The results of this study may be better transformed into the human organism. In the evolutionary history, the basic biochemical processes of oxygen free radicals in organisms are conservative and exist in the human organism from single cells to humans.

Researchers suggest not to directly ingest green tea extracts or concentrates, which are still toxic at certain concentrations; high doses of catechol can inhibit the function of mitochondria and cause cell death, which is very dangerous in the liver. of. Ingesting high doses of polyphenols may damage the body’s organs.

Although more catechols can be found in Japanese green tea, there are also sufficient amounts of polyphenols in other green teas; on the other hand, black tea contains much lower catechols. This is because the catechol is destroyed during the fermentation process, which is why green tea is more popular than black tea.

In summary, the results of this study indicate that the inhibition of complex I by EGCG and ECG may induce a temporary decrease in ATP levels in cells and temporary exposure to reactive oxygen radicals, which will lead to activation of SKN-1 and DAF-16; Through adaptive response, catechol will reduce lipid content and enhance the body’s active oxygen defense mechanism, and it can also improve the body’s long-term health.

The catechol in green tea may enhance the body’s health and prolong life.