Young patients with colorectal cancer has no difference on survival rate

Young patients with colorectal cancer has no difference on survival rate.

There is no statistical difference in the survival rate between young patients and patients with colorectal cancer over 50 years old.

As a group, young people have higher levels of physical activity, better physical fitness, and more energy, so they will have a longer future. However, young patients are even more vulnerable to colorectal cancer.

Colorectal cancer (CRC) is a general term for cancers that initially develop in the tissues of the colon or rectum. It is one of the most common malignant tumors worldwide.

According to the latest global data released by the International Agency for Research on Cancer (IARC) of the World Health Organization in 2020, colorectal cancer is the third most common cancer after breast and lung cancer, accounting for 9.4% of patients.

Importantly, the incidence of early-onset colorectal cancer (people younger than 50 years old) in many countries is increasing year by year.

Recently, in a study published in the Journal of the National Cancer Institute (JNCI) (IF=13.506), a research team from the Dana Farber Cancer Institute of Harvard Medical School compared the treatment of metastatic colorectal cancer for the first time Survival rates of young and elderly patients in clinical trials. 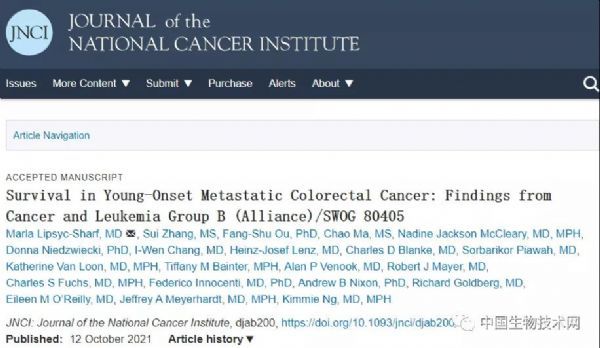 They found that although younger patients tend to be healthier than older patients and can receive more intensive treatment, the median overall survival of patients under 35 is the shortest of all age groups.

Overall, there is no statistically significant difference in survival rates between young patients and colorectal cancer patients over 50 years of age.

These results overturned traditional views. Although there are several factors that are beneficial to younger patients, younger patients do not perform better than older patients. This finding may indicate that colorectal cancer is more aggressive in its early stages.

In this study, the researchers studied the data of 2326 patients who participated in the CALGB/SWOG 80405 clinical trial.

The researchers compared the survival of 514 patients under the age of 50 with 1812 patients aged 50 and over.

The progression-free survival period of the two groups of patients before the cancer worsened was also similar: 10.87 months for young patients and 10.55 months for elderly patients.

Even more incredible is that the researchers found that the median overall survival of patients under the age of 35 is the shortest among all age groups, at 21.95 months; and elderly patients is 26.12 months.

The researchers said that because the study included relatively few patients under the age of 35, this difference was not statistically significant, but it was consistent with previous studies that very young patients had a worse prognosis.

This finding emphasizes that there is still a lot to know about colorectal cancer in young people. New cases of colorectal cancer are increasing significantly: between 2000 and 2013, the incidence of people under 50 years of age increased by approximately 22%.

Despite continuous new research results, researchers have still not found the exact cause of the increase in cases.

The first author of the study, Dr. Marla Lipsyc Sharf of the Dana Farber Institute, said: “If current trends remain unchanged, by 2040, colorectal cancer is expected to become the second leading cancer and the leading cancer for patients aged 20-49. cause of death.

Understanding the survival of this population is very important for the development of customized therapies. “

The researchers pointed out that the study has not yet determined whether there are consistent molecular differences between colorectal cancer cells in young patients and elderly patients. Current research is also exploring whether differences in the gut microbiome can explain the increase in the incidence of early-onset colorectal cancer.

Recently, in a new study published in “JNCI Cancer Spectrum”, a large international research team led by New York University in the United States conducted the first large-scale study on the non-genetic risk factors of early-onset colorectal cancer. Factors such as higher income, lower education and excessive drinking are related to the increase in the incidence of colorectal cancer among people under 50. This research provides a basis for the targeted identification of high-risk groups.

The increase in patients with early-onset colorectal cancer is worrying researchers, because these cases are often worse than those diagnosed in the elderly. Therefore, some countries recommends that people with a higher risk of colorectal cancer undergo regular screening from the age of 40. The American Cancer Society has also called for screening to begin at the age of 45.