Natural killer (NK) cells in peripheral blood is a typical (PB) lymphocytes (5-10%), about 45 years ago, it was first discovered in mice.

Because of the unique chemokine receptors, NK cells distributed differently in healthy tissue. NK cells mainly in the bone marrow, liver, spleen, and PB; however, some of them are also found in lymph nodes.

Physiological effects of growth factors produced by NK cells is unclear. NK cells co-localize with other hematopoietic cells (such as dendritic cells (the DC)) in the inflamed area is chemokine induced by them.

(A) NK cells are capable of presenting antigen to T cells by killing immature DC, while promoting IFN-γ and TNF-α mediated enhancement of DC maturation.

(B) NK cells can specifically recognize their lack of MHC I cells (Missing-self) molecules expression.

(E) factor pathway can exert an antitumor cell potential, as cytokines (e.g., NK cells) secrete a variety of cytokines, such as TNF-α.

(G) checkpoint blocking of NK cells, can be inhibited by preventing the interaction of NK cell inhibitory receptor with its ligand.

(H) Since NK cells adoptively transferred for the mismatch between the donor and acceptor, the inhibitory-KIR, the lack of NK cells eliminate tumor cells allogeneic MHC itself. CAR-NK cells

(I) specific to a tumor antigen overexpressed design may also be used to eliminate certain tumor cells.

(J) designed bispecific molecules are also used to specifically eliminate tumor cells, such as NK cell receptor binding molecules specific activation of one side and the other side of the tumor antigen.

(K) NK cells to enhance or reduce the activity of macrophages and T cells produced by IFN-γ and IL-10 in.

By forming transmembrane perforin (perforation) to increase the permeability of the channel the particles more easily enter the enzyme and causes osmotic lysis on the target cell.

Interaction naive T cells and NK cells into the secondary lymphoid compartment from the site of inflammation plays an important role in mediating T cell reaction.

As the first line of defense, NK cells prevented from invading pathogens and tumorigenesis.

After infection, NK cells activated quickly, without prior sensitization, in order to avoid infection and abnormal cells.

NK cells were divided into subgroups based on their functional properties and level of maturity. Progress on tumor immunology deep understanding of the biology of NK cells, especially their clinical application in recent years become an interesting research focus areas.

The following describes some unique features make the use of NK cells in the future immunotherapy.

NK receptors and their regulatory mechanisms

Present in the canonical and noncanonical major histocompatibility complex (MHC) I molecules is suppressed or NK activating receptors expressed on the cell identified on normal cells.

Balance adjustment and for activation of NK cells between inhibitory and activating receptor signaling use. 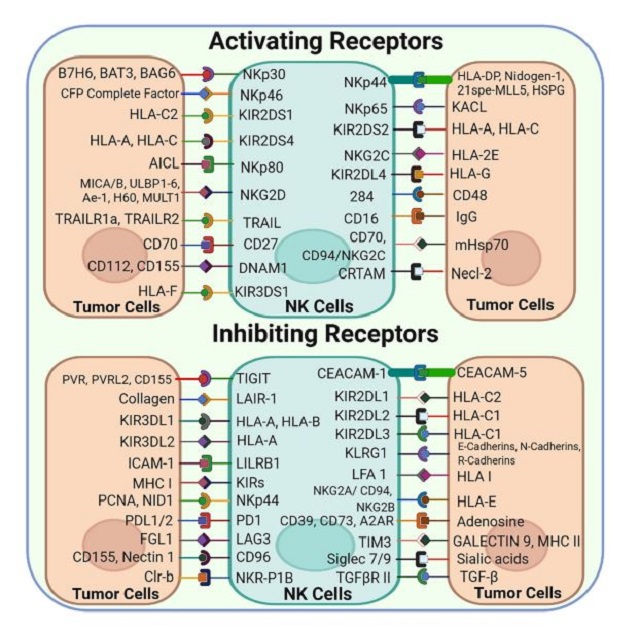 To identify the corresponding ligand MHC molecule or other inhibitory receptor is down-regulated in tumor cells; however, NK cells are activated and subsequently kill tumor cells (FIG. 1) by so-called “missing self” mechanism.

Typically, present on the cell surface of MHC molecules act as ligands healthy inhibitory receptors, contributes to the establishment of self-tolerance and NK cells.

However, due to the development of tumor cells may lose these molecules, resulting in reduced inhibitory signals to NK cells. Another based receptor – ligand interactions trigger the main mechanism of activation of NK cells is called “self-induced” mechanism.

Therefore, these “missing self” and “self-induced” change of cell senescence characterized, DNA damage cell stress response and significant forms of tumor suppressor genes, expression of these genes to stimulate a robust activation of receptor ligands.

NK cells were activated in activation of the receptor these effects and cytotoxicity by NK cells mediated by pro-inflammatory cytokines mediated direct or indirect killing of target cell elimination.

Activation of the receptor as a prototype NK cells, CD16 can trigger cytotoxicity and cytokine and chemokine secretion, thereby imparting the anti-tumor activity of NK cells.

Transmembrane domain and help FcεRIγ D16 CD3ζ chain binding, resulting in the formation contains an immunoreceptor tyrosine-based activation motif (the ITAM) subunits, the subunits of these signal transduction pathways in these cells is associated with the subunits to many recombination activating and regulating cytoskeletal elements transcription factors.

In NK cells, the ADCC mediated by such passage, characterized in that the cytotoxic secretory granules (perforin and granzyme) and Fas ligand and targeting TNF-related apoptosis-inducing ligand participation (of TRAIL) death receptor.

Macrophages and regulation of T cell responses can kill target cells. NK cells can be enhanced or reduced activity of macrophages and T cells produced by IFN-γ and IL-10.

These cytokines cause the release of lysosomal hydrolases from the target cell by changing the cell membrane phospholipid metabolism.

Such altered metabolic activation of the degradation of the target nucleic acid within the cell genomic DNA endonuclease. NK cells through a crosstalk between DC and NK cell mediated immune response.

Similarly, another potential mechanism of killing target cells is blocked checkpoint, which prevents the performance of inhibiting the interaction of their respective receptor ligands.

Thus, a mismatch between donor cells and NK cells KIR receptors and MHC class I molecules may start to eliminate target cells.

Furthermore, activation of NK cells CARs on gene expression can specifically bind to a tumor antigen.

Interestingly, bispecific molecules can also be used to simultaneously bind to a tumor antigen on activated receptor and NK cells, to stimulate tumor lysis mediated by NK cells.

Of DCs and inhibitory receptors, regulatory T cells (of Tregs), the interaction of tumor cells and the respective ligand on the infected cells to generate a signal regulating activation of NK cells, effector function and even subsequent failure.

Thus, NK cell activation can be suppressed by checking the receptor. For example, anti-NKG2A mAb anti-TIGIT and has shown excellent antitumor activity, they can be recovered as anti-tumor activity of NK and T cells.

KIR-specific expression in human NK cells, encoded by the LRC and is present on human chromosome 19. They may be combined with present on a target cell MHC class I molecules.

However, with a short tail activating KIR and DAP12 or FcγR use as adapter molecules to activate signal transduction of NK cells.

There are two inhibitory KIR (KIR2DL) or three (KIR3DL) extracellular Ig domains, it has a function specific for HLA molecules.

Thus, as recently as a detailed review, KIR highly sensitive to any changes in cancer and HLA molecules during viral infection.

Usually, KIR is constitutively expressed; however, inhibition signal naturally dominate and inhibit the activation of NK cells and fine-tune the signal in order to protect healthy cells, also known as N cell self-tolerance.

Self-tolerance is believed to be regulated by the binding of some powerful inhibitory receptors (such as KIR and NKG2A) to MHC class I molecules.

Presumably, the expression of MHC class I molecules of cancer (self-deletion) reduced this inhibition can be prevented and the reaction allowed to self.

KIR-HLA mismatches are also important factors to be considered in cancer immunotherapy.

Further, in order to obtain the best anti-tumor effect, consider the actual expression of KIR, since they are typically expressed in the form of random combinations (38).

However, since the MHC mismatch,-KIR mismatched allogeneic NK cells may be rejected.

For example, in a study of KIR / HLA genotype was found in acute kidney caused by KIR / HLA polymorphism transplant rejection.

For example, HLA-Bw6 + NK cells in patients with KIR3DL + NK cells react more slowly than KIR3DL HLA-Bw4 patient, because Bw4 as a ligand for KIR3DL1.

Thus, inhibition of the signal may affect the strength of NK cells. In addition, only a small number of autoreactive receptors lacking NK cells are non-reactive, because NK cells in the maturation process of “permission” or “education” gives this feature.

In skin cancer, lymphoma, leukemia, breast cancer and bile duct cancer and other cancers, the inhibitory KIR is reduced, while activating KIR is upregulated.

Inhibitory KIR was first considered to be NK cells checkpoint receptor. Since mAb may identify an inhibitory KIR, to enhance their anticancer activity of NK cells by blocking the signal transduction of NK cells.

Thus, compared with other treatment methods, mAb potential therapeutic drug candidates, they are more secure and less side effects, other treatments have been used in clinical trials against a variety of tumor types.

NK cells in comparison with autologous, allogeneic NK cells is not inhibited self-MHC molecules. In addition, a number of studies have shown that injection of haploidentical NK cells into patients with AML Self Missing is safe and can induce a large number of clinical activity.

Found that haploidentical NK cells were adoptively transferred into AML patients was safe, because it does not cause graft-versus-host disease (of GVHD), and administration of IL-2 that their persistence increased about 4 weeks.