Baicalein is expected to be used to treat colorectal cancer

Baicalein is expected to be used in a new type of targeted therapy to treat colorectal cancer.

It has a long history of being used in antioxidant, antiviral, antibacterial, anti-inflammatory and anti-allergic treatments. Baicalein also has the effects of reducing cerebrovascular resistance, improving cerebral blood circulation, increasing cerebral blood flow and anti-platelet aggregation.

It is clinically used for the treatment of paralysis after cerebrovascular disease.

In recent years, researchers have discovered that baicalein has anti-cancer effects by affecting various biological processes such as cell proliferation, metastasis, apoptosis and autophagy, including anti-cancer activity against lung cancer , breast cancer , cervical cancer and other cancers.

Colorectal cancer (CRC) is a general term for cancers that initially develop in the tissues of the colon or rectum. It is one of the most common malignant tumors worldwide.

According to the latest global data released by the International Agency for Research on Cancer (IARC) of the World Health Organization in 2020, colorectal cancer is the third most common cancer after breast and lung cancer, accounting for 9.4% of patients, including colorectal cancer patients in China Accounted for 31% of the world.

The number of deaths caused by colon cancer ranks fifth in the ranking of cancer deaths in China.

In this study, the researchers used colorectal cancer cells as a research model, conducted drug-target-disease network analysis, and constructed a protein-protein interaction network to explore the downstream of TLR4 that mediates the inhibitory effect of baicalein signal molecule. 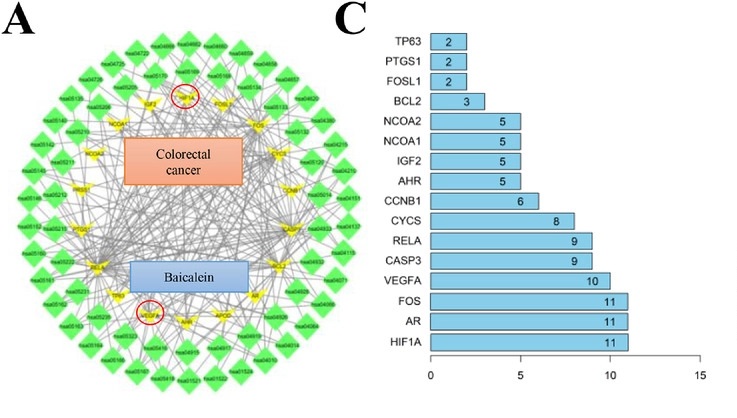 Previous studies have shown that in patients with colorectal cancer, the expression of HIF-1α and VEGF increased by 54.93% and 56.34%, respectively, and the expression level was related to tumor stage and overall survival.

The results of this study show that baicalein can directly bind to TLR4 protein stably, interrupt the complex (LPS-TLR4/MD-2) and inhibit the activity of TLR4; and, baicalein can reduce colorectal cancer cells in a dose-dependent manner in TLR4 The expression of HIF-1α and VEGF, and through the TLR4/HIF-1α/VEGF axis, inhibit the growth, angiogenesis and cancer metastasis of colorectal cancer cells in the mouse model. 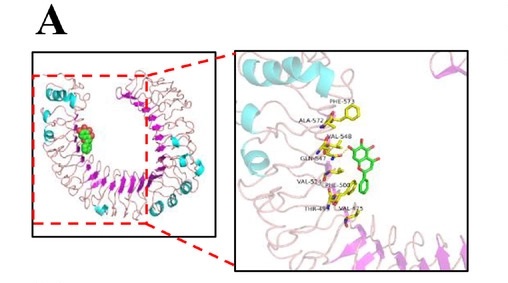 The study also found that baicalein has no obvious side effects on mice.

The researchers said that the above data strongly support the conversion of baicalein into a new type of TLR4 targeted therapy for colorectal cancer. In the future, they will use targeted delivery systems such as nanoparticles or inducers to deliver baicalein to tumor sites to further improve its anti-colorectal cancer effect.