The largest randomized crossover trial to date has shown that eating too late affects glucose tolerance and lowers insulin levels, which may be related to elevated melatonin levels

As the saying goes, people take food as their heaven. What to eat at each meal and how to eat to be healthy are questions we face every day.

In order to answer this question, scientists have carried out a lot of exploration. In terms of dietary rhythms, several small population studies and animal studies have demonstrated that eating dinner too late can damage health, increase the risk of diabetes and cardiovascular disease, and more [1,2].

However, there is still a lack of large-scale population-based research evidence to support this conclusion.

The study showed that the level of melatonin in the body when eating dinner later was 3.5 times higher than when eating dinner earlier. , and increases postprandial blood glucose and lowers insulin levels. At the same time, this negative effect was more pronounced in the melatonin receptor gene MTNR1B G allele carrier population.

The findings were published in Diabetes Care , a prestigious journal of the American Diabetes Association [6]. This study is the largest population-based randomized crossover study of dinner timing and diabetes risk to date.

This study was conducted in a Spanish natural late-eating population of 845 Europeans aged 18-70 with no history of diabetes and related medications. 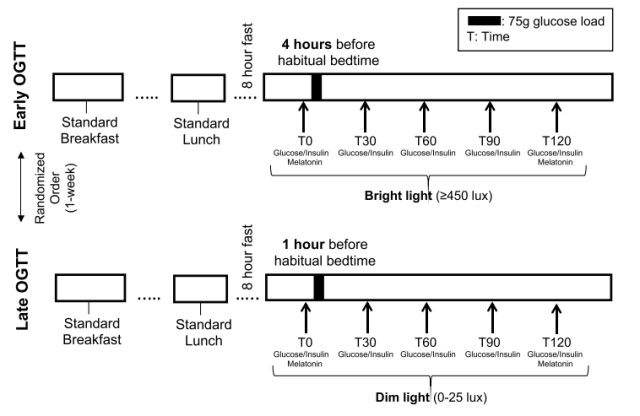 Compared with the EE test, the serum melatonin level was 3.5 times higher in the LE test.

The results of the OGTTs experiment showed that the postprandial blood glucose in the LE test was significantly increased, and the area under the curve (AUC) was increased by 8.3% compared with the EE test. 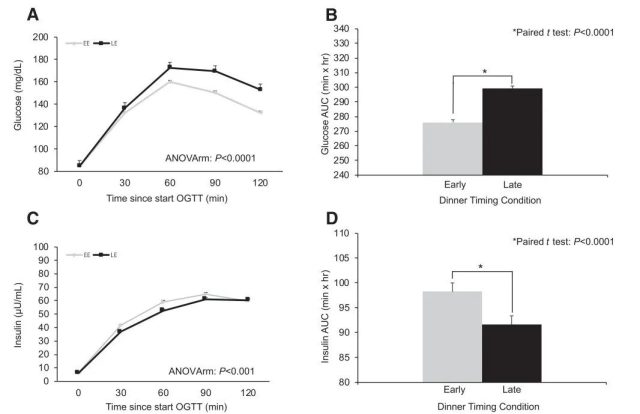 Melatonin is a hormone secreted by the pineal gland of the brain, which is suppressed during the day and active at night.

Melatonin is probably best known for its ability to improve sleep quality and adjust circadian rhythms [3].

At the same time, melatonin can act on a variety of endocrine organs and regulate the corresponding hormone secretion [4].

The role of melatonin is complex and diverse, and studies have shown that increased levels of endogenous melatonin may cause impaired glucose tolerance [5].

Since endogenous melatonin levels are elevated at night, it may be related to melatonin that eating dinner too late affects glucose tolerance.

There are three genotypes of MTNR1B gene (CC, CG, GG), among which the more G allele expression, the higher the expression of melatonin receptor in pancreatic islets [7].

To further explore the relationship between melatonin, dinner time and glucose metabolism, the researchers examined the MTNR1B genotype in all subjects.

It was found that among the three genotypes of the MTNR1B gene, subjects with more G alleles had worse glucose metabolism. 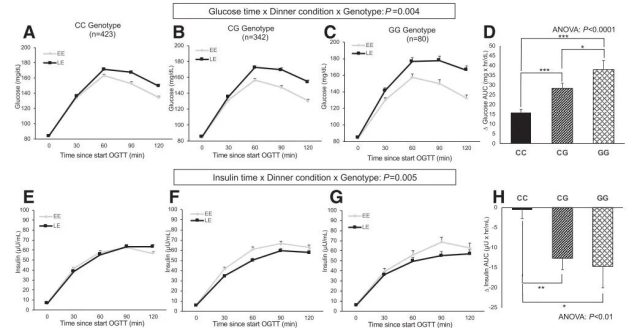 The results of the study show that a late dinner time can cause a defect in insulin secretion, which leads to a rise in postprandial blood sugar.

This defect in insulin secretion may be due to elevated levels of melatonin. At the same time, the G allele of the MTNR1B gene is a type 2 diabetes risk allele, and patients with more G alleles are more likely to damage islet function by eating too late.

The results of this study are important for the prevention of type 2 diabetes, especially for those who eat close to bedtime, including night shift workers, people with jet lag and eating disorders, and people who use melatonin supplements heavily.

These individuals should be aware of potential diabetes risks while eating, and for the general population, it is also best to avoid eating for at least a few hours before bedtime.