Yogurt is a kind of food that we all like very much. They can be seen everywhere in supermarkets and convenience stores.

The most well-known benefit of yogurt is that it is rich in probiotics, which can promote our digestion and absorption.

Recently, CELL sub-journal published a research paper pointing out that probiotics in the gut may promote the occurrence of tumors! Seeing this, everyone was startled, and silently put down the yogurt in their hands. Let’s take a look at what’s going on next!

Gut microbes may be involved in tumorigenesis!

AhR is a receptor for tryptophan metabolites, which can effectively inhibit the inflammatory response, and AhR is highly expressed in TAM.

We know that macrophages, as a part of innate immunity, play an irreplaceable role in the activation of the body’s specific immunity.

Their polarization towards pro-inflammatory can effectively promote effector cells such as CD8+ T cells in vivo to exert cytocidal effects, thereby resisting tumor.

However, in the tumor microenvironment (TME), macrophages are often polarized in an anti-inflammatory direction, suppressing immune responses and promoting tumor growth by producing anti-inflammatory cytokines such as IL-10.

Gut microbes colonize our guts to help the body perform many important physiological activities. Much of the food we eat depends on them for catabolism. Foods rich in tryptophan produce indole after microbial metabolism, which binds to AhR as a ligand and activates downstream reactions.

This study focused on pancreatic ductal carcinoma (PDAC), a disease with a poor prognosis. Therefore, exploring whether the expression of AhR promotes the phenotypic transformation of TAMs and thus promotes the progression of PDAC is of great significance for the treatment of PDAC.

1. Specific knockout of AhR gene in mouse macrophages showed that TAMs were polarized in a pro-inflammatory direction, CD8 + Tinfiltration was increased, and tumor weight was reduced.

2. After using the AhR antagonist CH223191 , it was found that TAMs were also polarized in a pro-inflammatory direction, CD8+T infiltration increased

Consistent with the results after knocking out the AhR gene, CD40, CD86, PD-L1, and MHCII molecules were up-regulated, indicating that TAMs were polarized in a pro-inflammatory direction.

The results showed an increase in CD8 + T cell infiltration. 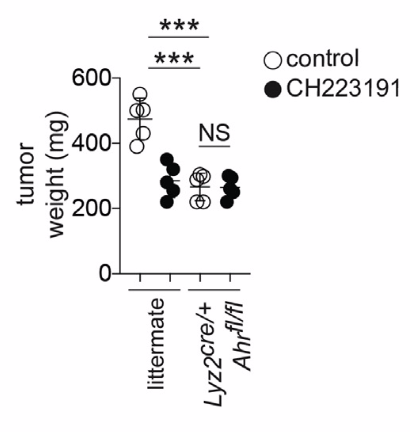 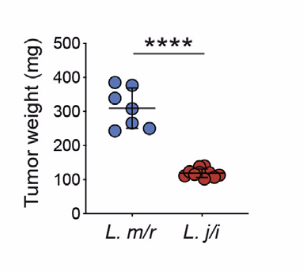 Compared with L.johnsonni and L.intestinal, L.murinus and L.reuteri can better promote tumor growth, which indirectly indicates that indole and its metabolites are the main substances 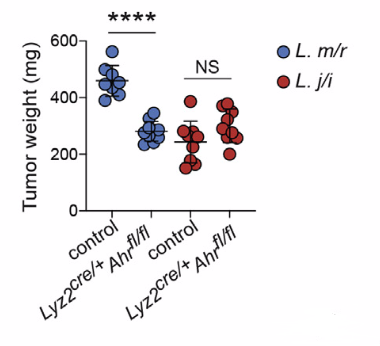 By repeating this experiment in AhR knockout mice, L. murinus and L. reuteri have a reduced ability to promote tumors in AhR knockout mice compared with the control group, indicating that lactic acid bacteria can bind AhR by producing indole and its related products thereby promoting tumor growth. 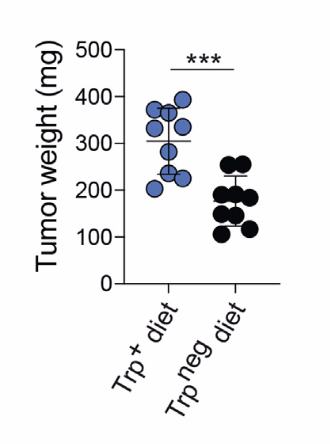 Compared with the diet supplemented with tryptophan, the tumor growth of mice in the group without tryptophan was significantly suppressed. 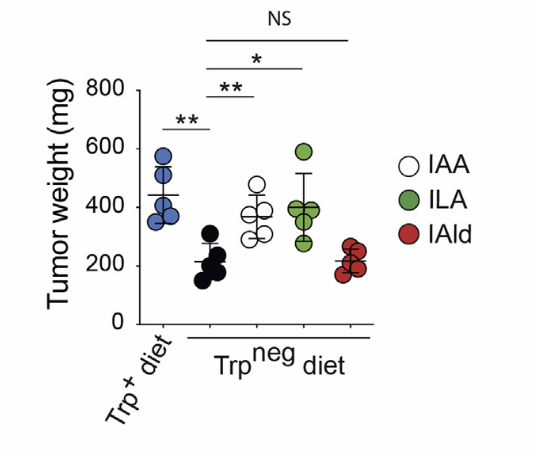 The infiltration and activity of CD8 + T cells were also significantly up-regulated in the group without tryptophan supplementation.

The above experiments indicate that the AhR-binding ligand indole and its related products of macrophages can promote the polarization of macrophages to the anti-inflammatory direction, thereby inhibiting the infiltration of CD8 + T cells, creating a microenvironment suitable for the survival of pancreatic cancer cells, and promoting the development of pancreatic cancer cells. cancer development.

Therefore, indole in food is crucial to the occurrence and development of pancreatic cancer, and tryptophan as its raw material is the culprit behind all this!

The literature indicates that many bacterial groups of the genera Bacteroides, Bifidobacterium, Clostridium and Lactobacillus are major producers of indole substances, and it is difficult for us to significantly change the intestinal flora in our human body except for the use of antibiotics. proportion of the group.

A more feasible way is to perform fecal transplantation, thereby reducing the relative content of the above strains and reducing the production of indole.

Then some friends will ask, can we still drink yogurt?

We know that yogurt contains many probiotics, including lactic acid bacteria. However, this article is based on the analysis of the intestinal flora of mice. In mice, lactic acid bacteria are the main microorganisms that produce indole, and they are not necessarily applicable to humans!

Moreover, the article did not do relevant experiments on whether adding Lactobacillus can increase the risk of pancreatic cancer, and there is not enough experimental evidence to support the view that we cannot drink yogurt.

And studies have shown that oral probiotics can improve the homeostasis of intestinal flora in cancer patients and enhance the patient’s immunotherapy response, prolonging the patient’s survival! [1]