Recently, researchers from the Chinese Academy of Sciences and Shenzhen BGI Institute of Life Sciences and other institutions have induced and cultured human totipotent stem cells that resemble fertilized eggs for 3 days through somatic cell induction. This is the “youngest” human cell cultured in vitro in the world.

It is another subversive breakthrough in the field of regenerative medicine after scientists successfully induced human pluripotent stem cells.

The relevant research results were published in the top international academic journal Nature in the early morning of March 21. 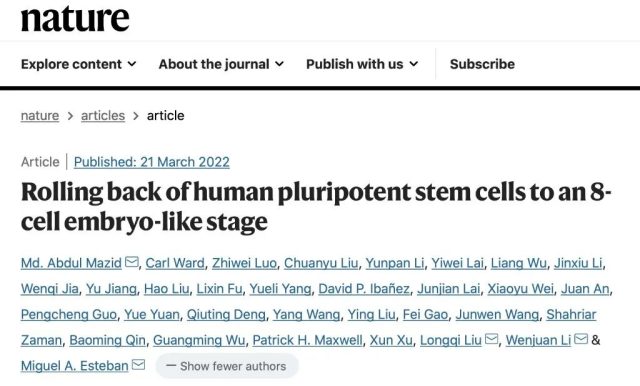 This achievement will help realize the in vitro regeneration of human organs in the future, which is of great significance for solving problems such as organ shortage, allogeneic and xenotransplant rejection.

In 2012, the Nobel Prize in Physiology or Medicine was awarded to Shinya Yamanaka, a Japanese scientist who successfully induced mature somatic cells into blastocyst-stage pluripotent stem cells. Human blastocyst stage cells are in the state of fertilized egg development for 5-6 days, and its ability to further develop is relatively limited.

And this research takes the field a big step forward, obtaining for the first time embryonic cells from a fertilized egg that divides for only three days. In the early stage of fertilized egg development, great changes take place every day.

It is these 2-3 days that scientists have obtained human 8-cell stage embryo-like totipotent stem cells through in vitro induction for the first time.

This is the “youngest” human cell induced in vitro to date, with very strong developmental potential. The research will also help unlock the keys to early development of the human embryo.

“These totipotent 8-cell stage embryo-like cells recreate the embryonic state of a fertilized egg after only three divisions, and can differentiate into placental tissue and potentially develop into more mature types of stem cells than past pluripotent stem cells. Body tissue has brought good news to millions of patients around the world who need organ transplantation .”said the corresponding authors of the paper, Professor Miguel A. Esteban, Dr. Md. Abdul Mazid and Dr. Li Wenjuan of the Chinese Academy of Sciences.

“This progress is also a perfect example of the combination of regenerative medicine and single-cell sequencing technology,” said Dr. Liu Longqi, another corresponding author of the paper, Shenzhen BGI Life Sciences Research Institute, “through the method of large-scale single-cell multi-omics mapping. The efficient identification and mechanism analysis of cells or tissues obtained in vitro or in vivo by stem cell technology will greatly accelerate the development of the field of regenerative medicine.”

This is the first time that researchers have “transformed” human pluripotent stem cells into totipotent embryonic cells in a true sense, allowing people to reverse-transform “adult” versions of cells into “infant” versions with more possibilities. cell.

Moreover, since the totipotent cells obtained this time are closer to the original state of early embryos, if they are used in regenerative medicine, the cultivated organs will also be closer to the state of real organs, which is more conducive to transplantation.

The breakthrough of this research is due to the advancement of single-cell sequencing technology.

In the past, researchers may have to process and culture thousands of cells with less than a ten percent chance of success. Today, based on the single-cell library sequencing platform (DNBelab C4) independently developed by MGI, combined with the DNBSEQ sequencing technology made by MGI, scientists can perform multi-dimensional single-cell analysis with high sensitivity and accuracy, and quickly obtain important developmental features. Potential cells, and study the development of these cells.

In addition, the research team also sorted and injected the induced totipotent stem cells into mice for further development, and then used BGI’s single-cell sequencing technology for large-scale cell profiling.

Ultimately, the researchers determined that the experimentally obtained totipotent stem cells were highly similar to human 8-cell stage embryonic cells, demonstrating the totipotency of the cells. This provides a scientific basis for using the patient’s own cells for organ culture in the future and for transplantation and replacement of their own organs.

The research was led by the Chinese Academy of Sciences and Shenzhen BGI Life Sciences Research Institute, with the participation of several research teams from the University of Cambridge, Jilin University, and Rajshahi University in Bangladesh. This study has passed the ethical review and strictly followed the corresponding regulations and ethical guidelines.