Since its inception, the CRISPR gene editing system has become a powerful tool for studying cellular function. It has a major impact on our understanding of cancer biology and continues to drive new discoveries that accelerate the development of cancer diagnostics and treatments.

Recently, a review article titled: CRISPR in cancer biology and therapy was published in the journal Nature Reviews Cancer , which systematically reviewed the latest progress of CRISPR system in cancer research, diagnosis and treatment.

The impact of CRISPR on cancer biology research

Due to the simplicity and efficiency of CRISPR technology, it has become routine to generate gene knockout mouse models . Moreover, by selectively introducing all components of the CRISPR gene editing system into certain somatic cells, tissue-specific cancer models can be generated .

Delivery of CRISPR to the liver, pancreas or lung enables rapid generation of cancer models with complex phenotypes. 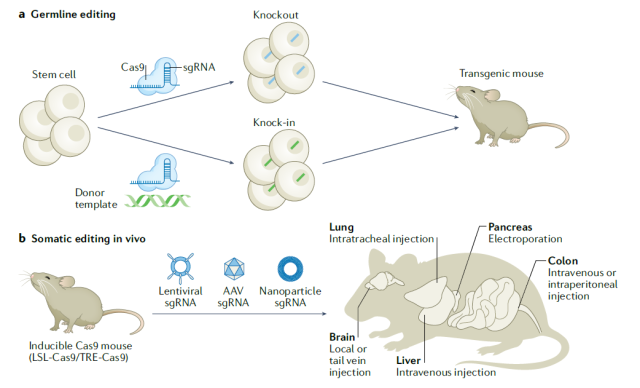 The review authors note that perhaps the greatest impact CRISPR technology has had on cancer research is CRISPR screening.

Using a library of guide RNAs (gRNAs) targeting different genes in the genome, this screen can systematically knock out any gene in a cell line or organoid, and then observe the effect of the knockout on cancer cell growth or drug response.

Another important application of CRISPR in cancer research is tracking lineage changes in cancer cells .

A hallmark of cancer is its heterogeneity, with cancer cells accumulating genetic variations that lead to the creation of cell clones with distinct characteristics.

Understanding heterogeneity within tumors and tracking the generation and evolution of new clones has given scientists a more complete understanding of tumorigenesis.

At present, researchers have developed a variety of CRISPR-based tracking strategies that can find different cell clones in mixed cell populations containing multiple cell clones and track their dynamic changes over time.

CRISPR technology can introduce unique barcodes into cells that can be used to mark cancer cell lineages.

The latest CRISPR recording systems are able to introduce markers in the genome at specific times, and by analyzing these different markers, lineage relationships between different cancer cell clones can be constructed. 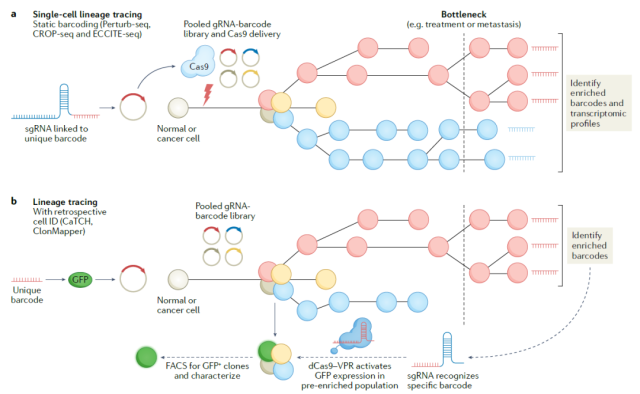 They can emit a fluorescent signal by cleaving the RNA sequence carrying the fluorescent reporter protein after finding a specific oncogene mutation sequence.

This technology was used to produce rapid and sensitive tests for the new coronavirus during the COVID-19 virus pandemic.

The same platform can be used to generate highly sensitive personalized cancer discovery and monitoring systems.

In addition, the CRISPR system can be used to precisely cut DNA fragments in specific regions of the genome .

Compared with traditional random genome fragmentation, this method can enrich the DNA fragments of interest, which can be combined with next-generation gene sequencing. , gene mutations on specific genes can be found in very small sample sizes. This technique is currently being evaluated in clinical trials for the detection of p53 mutations in ovarian cancer.

In cancer treatment, one of the main applications of CRISPR technology is to engineer immune cells to generate anti-cancer immunotherapies.

Moreover, using CRISPR/Cas9 technology, the CAR-expressing sequence can also be specifically inserted into the gene locus of the T cell receptor alpha constant region (TRAC) of the cell, resulting in the consistent expression of the CAR.

The many ways CRISPR can engineer T cells

In theory, CRISPR gene editing can directly correct the genetic mutation that drives the cancer, or kill cancer cells that produce a specific genetic mutation, which can inhibit tumor growth.

However, this strategy needs to overcome multiple hurdles, including the delivery of tumor-specific therapies, and the need for high-efficiency gene editing.

Since NF-κB is overactivated in a variety of cancers, this strategy can specifically express the CRISPR-Cas13a system in cancer cells , Knock down the expression of oncogenes to achieve the effect of inhibiting the growth of cancer cells. 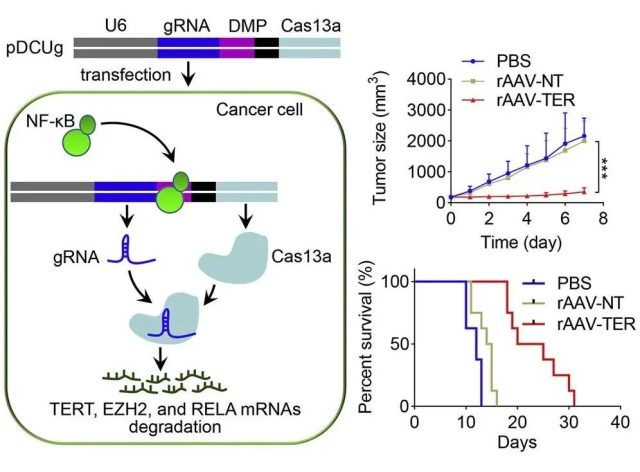 Using NF-κB to control the expression of the CRISPR-Cas13a system, tumor-specific degradation of oncogenes

The use of LNP to deliver Cas9-encoding mRNA and gRNA has effectively targeted PLK1 , a gene essential for mitosis , in proof-of-concept studies, reaching 70% in vivo gene editing efficiency in a mouse model of glioblastoma, causing apoptosis and inhibiting Tumor growth by 50% and improved survival by 30%.

Taken as a whole, these preclinical studies show the potential of in vivo CRISPR gene editing for the treatment of cancer, although much effort is still required to translate CRISPR in vivo gene editing into viable clinical-stage anticancer therapies.

DNA double-strand break damage caused by CRISPR technology may stimulate the p53 signaling pathway, resulting in cell death or selection of cells with reduced p53 function. In addition, the off-target editing potential of CRISPR systems has been a concern for researchers.

In the next 5-10 years, CRISPR technology will truly enter the stage of clinical-stage therapy, and work in CAR-T therapy and other immune cell engineering heralds their role in the treatment of cancer.

In scientific research, CRISPR technology has begun to address many of the fundamental questions of cancer. By characterizing the role of individual genes in cancer cell behavior, it will provide the foundation for building the next generation of immunotherapies, uncovering the role of noncoding regions and regulatory elements in tumorigenesis and many other fields. CRISPR technology has been and will be one of the key tools in our understanding and treatment of human cancers.