AIDS (HIV)isshort for Acquired Immune Deficiency Syndrome , caused by infection with the HIV virus . HIV is a virus that can attack the human immune system.

It takes the most important CD4+ T cells in the human immune system as the main target of attack, and destroys the cells in large quantities.

After several years, even as long as 10 years or longer incubation period The development of AIDS patients will cause the body to lose its immune function.

According to the United Nations Programme on HIV/AIDS, there are currently 38 million people living with HIV and AIDS worldwide, and the number is still growing rapidly.

On April 11, 2022, a research team from the National Institutes of Health (NIH) published a paper entitled: Safety and tolerability of AAV8 delivery of a broadly neutralizing antibody in adults living with HIV: a phase in Nature Medicine , a top international medical journal 1. Research papers of dose-escalation trial .

Induction of broadly neutralizing antibodies (bnAbs) is a powerful tool for the prevention and treatment of AIDS. The study performed AAV virus-mediated gene therapy on 8 HIV-infected patients.

Disease treatment brings new and powerful tools. This is also the first time that monoclonal antibodies have been produced in humans by AAV delivery . 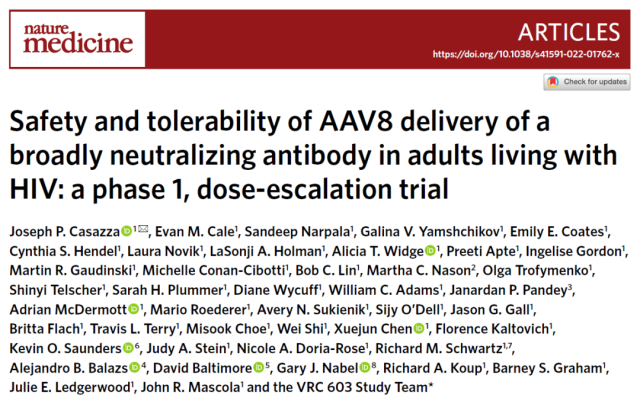 The study enrolled eight HIV-infected patients who had been on antiretroviral therapy for at least 3 months.

The primary endpoints of this Phase 1 clinical trial are to assess the safety and tolerability of AAV8-VRC07 treatment, determine in vivo pharmacokinetics and immunogenicity, and describe patient immune responses to AAV8-VRC07 vectors and their products.

Secondary endpoints were to assess the effect of AAV8-VRC07 on CD4 T cell counts and HIV viral load, and to assess the persistence of broadly neutralizing antibodies produced in the participants. 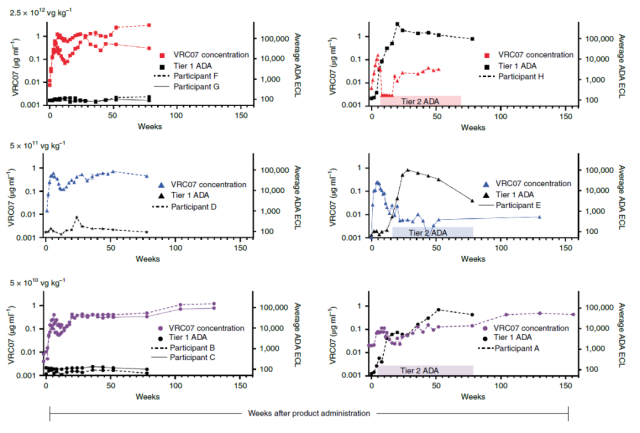 The results showed that intramuscular AAV8-VRC07 was safe and well tolerated. There were no clinically significant changes in the patient’s CD4 T cell count or viral load during 1-3 years of follow-up.

In 4 patients, serum broadly neutralizing antibody concentrations approached the maximum and remained stable over a follow-up period of up to 3 years.

This study shows that AAV vectors can produce durable and broadly neutralizing antibodies that are biologically active and difficult to induce in vivo, adding a new powerful tool in the fight against infectious diseases such as AIDS.

More importantly, this AAV delivery platform can produce antibodies for a long time with a single injection, and can use AAV to deliver the coding DNA of any desired antibody, which can be used to treat various infectious diseases such as malaria, COVID-19, AIDS, etc. It is used for the delivery of other biological drugs to treat various diseases such as autoimmune diseases and cancer.