Of the 6 candidate compounds whose chemical structures were announced, 3 targeted cancer targets, and the other drugs were used to treat Alzheimer’s disease, inflammatory skin diseases and hereditary angioedema.

Although many of these new molecules target disease-related targets or mechanisms that have long been concerned by the industry, such as PARP, epidermal growth factor receptor (EGFR), (phosphodiesterase 4) PDE4 and Tau proteins, they Compared with existing therapies, new breakthroughs have been made in different aspects such as mechanism of action, selectivity, and mode of administration. 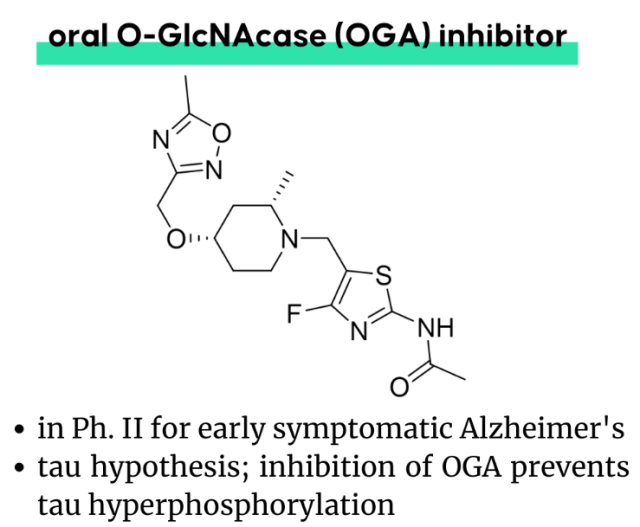 Alzheimer’s disease affects the lives of nearly 40 million people worldwide. The accumulation and spread of neurofibrillary tangles composed of tau protein in the patient’s brain is one of the hallmark features of the patient’s brain, and is closely related to the patient’s cognitive decline. O-GlcNAzyme (OGA) removes the glycosyl group from the tau protein, making it easier to aggregate.

Through multiple medicinal chemistry optimizations, the scientists generated a candidate compound named LY3372689, which was able to bind to OGA for 14 days at a 1 mg dose and showed a favorable safety profile in early clinical trials. It is currently being evaluated in a Phase 2 clinical trial, with results expected in mid-2024. 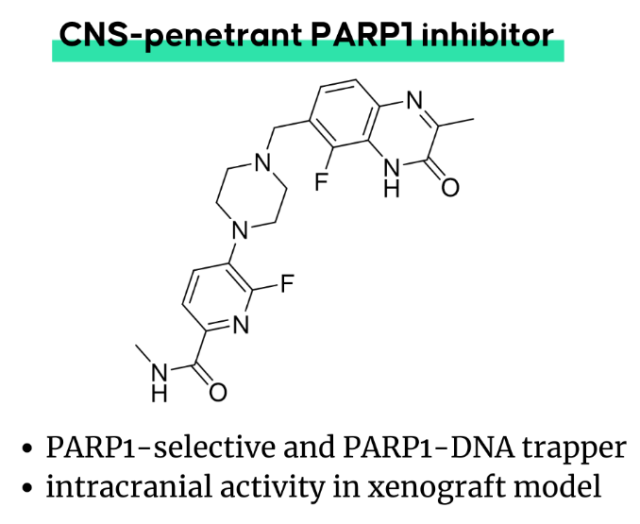 The PARP family of proteases plays an important role in the DNA damage response, and existing PARP1 and PARP2 inhibitors have been approved for the treatment of various cancer types harboring DNA damage response defects. At the just-concluded AACR conference, AstraZeneca announced the results of the first human clinical trial of its PARP1 inhibitor AZD5305. It was well tolerated and achieved an objective response rate of 25% in 40 patients evaluable for efficacy.

However, this compound cannot effectively enter the central nervous system. The researchers further optimized AZD5305 by placing the amine group next to the fluorine to generate a PARP1 inhibitor AZD9574 that can enter the central nervous system. In a mouse intracranial tumor xenograft model, it was able to effectively shrink tumors for more than 155 days without showing significant toxicity. The compound is about to enter clinical development. 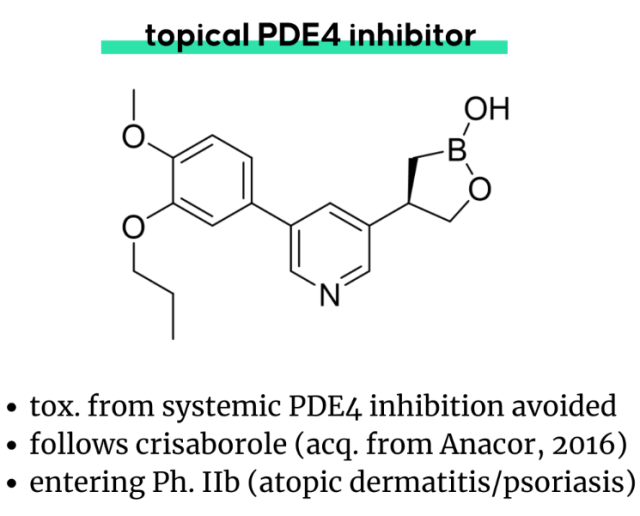 Phosphodiesterase 4 (PDE4) inhibitors are one of the important therapeutic options for the treatment of atopic dermatitis, psoriasis and other inflammatory skin diseases. Blocking PDE4 can slow the body’s inflammatory response, but oral PDE inhibitors are often associated with gastrointestinal side effects.

PF-07038124, developed by Pfizer, is a PDE4 inhibitor intended for topical use. It is designed to be highly effective, rapidly cleared by the body, and have suitable solubility and permeability characteristics for topical formulations.

This candidate therapy has already achieved positive results in a Phase 2a clinical trial for the treatment of atopic dermatitis, significantly reducing disease size and severity in patients at low doses. 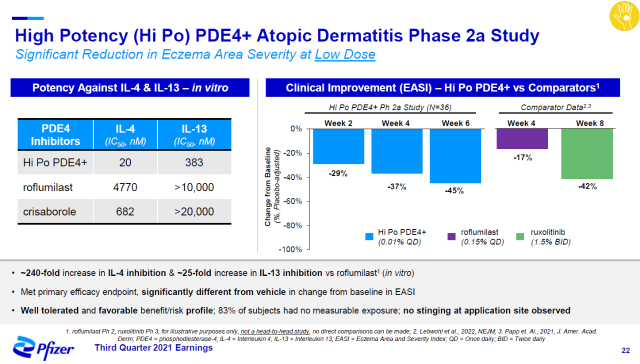 ▲ The results of the Phase 2a trial of PF-07038124 in the treatment of patients with atopic dermatitis (Image source: Pfizer official website)

With anti-IL-4 and anti-IL-13 antibodies emerging as powerful options for the treatment of inflammatory skin diseases, this topical PDE4 inhibitor offers new opportunities for combination with biologics. 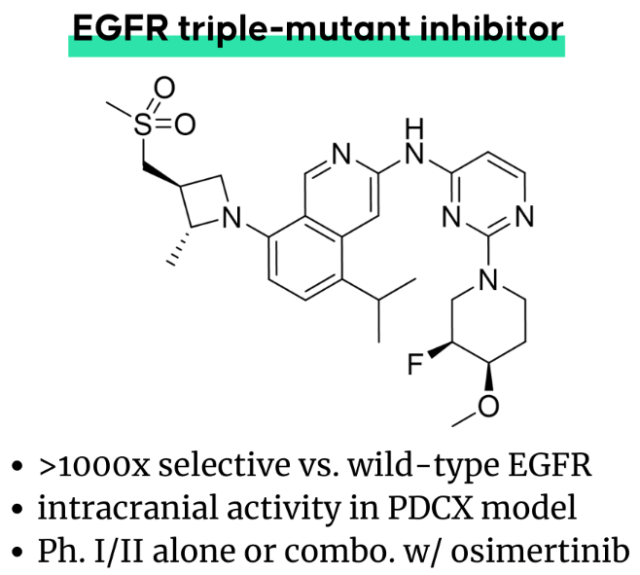 The development of drug resistance is usually due to the accumulation of mutations on EGFR, with T790M and C797S being the most frequently occurring mutations in EGFR after first- and third-generation EGFR inhibitor therapy, respectively.

BLU-945 is an oral fourth-generation EGFR inhibitor that inhibits the activity of EGFR with double or triple mutations.

Also, radiographic data showed a dose-dependent shrinkage of the patients’ tumors, with one patient receiving the highest dose of BLU-945 achieving a partial response. 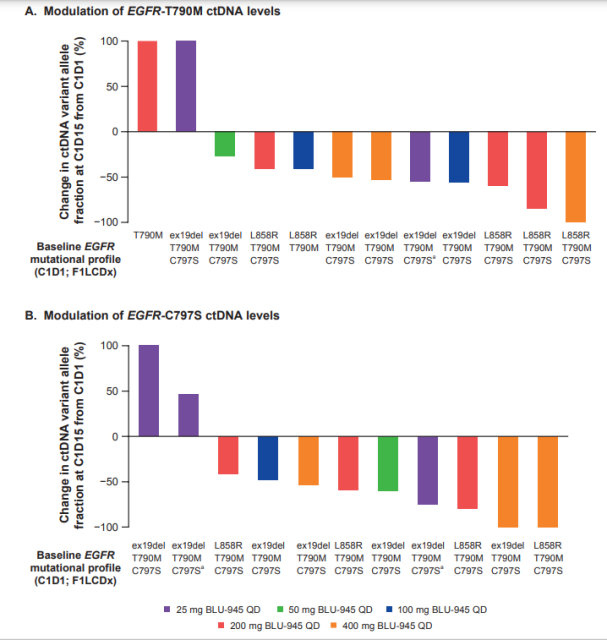 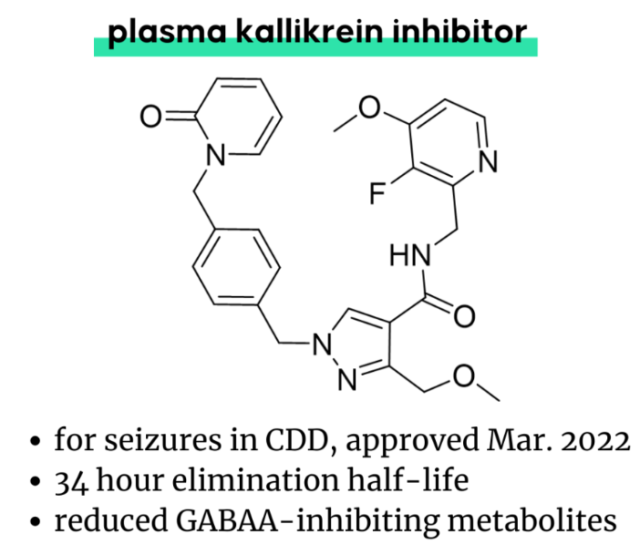 Hereditary angioedema (HAE) is a rare and potentially fatal genetic disorder characterized by rapid and painful onset of inflammation of the hands, feet, extremities, face, abdomen, larynx, and airways. Current therapies target plasma kallikreins, which inhibit the release of bradykinin and reduce the inflammatory response.

However, all existing treatments require intravenous or subcutaneous injection, and there is no oral treatment for acute angioedema attacks.

KVD900 is an oral plasma kallikrein inhibitor targeted as acute therapy for the treatment of angioedema episodes in patients with HAE.

In Phase 2 clinical trials, KVD900 significantly advanced the time to symptom relief in patients. It is currently being tested in Phase 3 clinical trials. 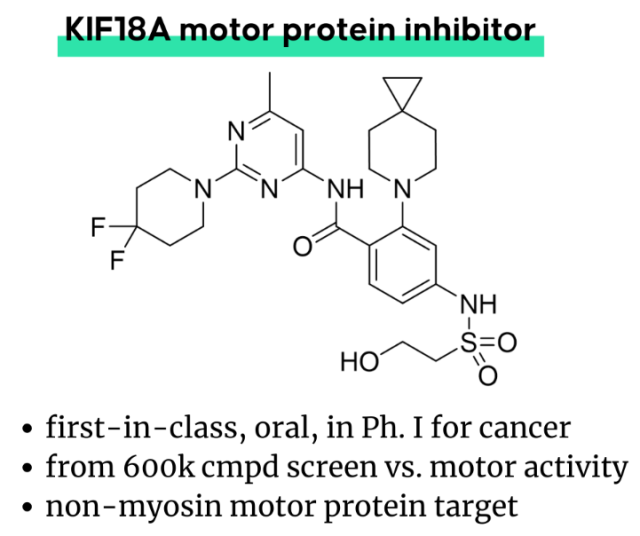 Kinesins are a group of molecular motor proteins that help separate chromosomes. Inhibiting these proteins may cause cell division in tumors to stop.

AMG 650 is a potential “first-in-class” oral KIF18A inhibitor currently being evaluated in a Phase 1 clinical trial for the treatment of solid tumors. Molecular motor proteins are an emerging class of target types. Bristol-Myers Squibb’s mavacameten for cardiomyopathy also targets the molecular motor myosin.

MoMa Therapeutics, which was listed on BioSpace’s 2021 Next-Generation Biotechnologies list last year, is also an emerging company dedicated to the development of molecular motor-targeted therapies.