Over the past three decades, a large number of preclinical and clinical data have shown that almost all targeted anticancer drugs exert immunostimulatory or immunosuppressive effects to a greater or lesser extent, thereby affecting the therapeutic effect.

The immunomodulatory activity of targeted anticancer drugs can arise from the drug’s interaction with cancer cells, as well as the drug’s ability to interact with immune cells and alter their function.

For example, targeted anticancer drugs can mediate immunostimulatory effects by promoting the secretion of proinflammatory cytokines or by limiting the release or activity of immunosuppressive factors. 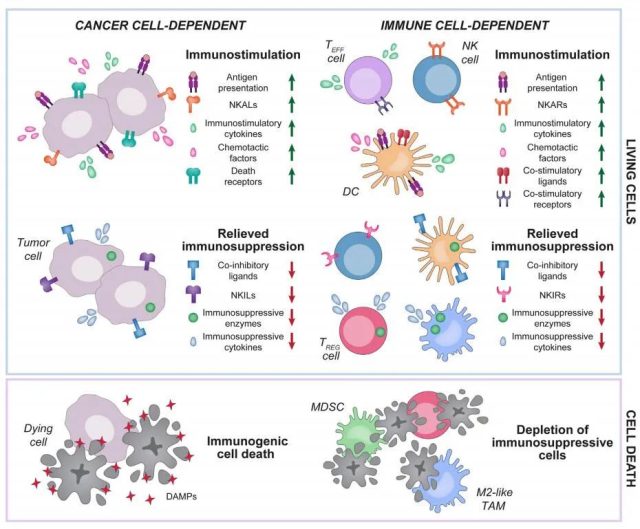 Cyclin-dependent kinases ( CDKs ) are a family of serine/threonine kinases that regulate cell cycle progression and other cellular processes, including DNA repair, transcription and metabolism.

CDKs have attracted considerable attention as potential targets for the development of novel anticancer therapies, and three different CDK4/CDK6 inhibitors have recently been approved for HR+ breast cancer patients.

There is increasing evidence that CDK4/CDK6 inhibitors, as well as inhibitors of other CDKs, not only prevent the proliferation of malignant cells, but also mediate various immunomodulatory effects.

(2) suppression of immunosuppression by inhibition of DNA methyltransferase 1 ( DNMT1 ) Treg cells were subsequently blocked by the CDK inhibitor 1A ( CDKN1A ).

The immunostimulatory activity of CDK4/CDK6 inhibitors can be counteracted by their ability to upregulate the immunosuppressive molecule CD274 ( PD-L1 ) through both transcriptional and post-translational mechanisms.

In addition, CDK4/CDK6 inhibitors can also be combined with other targeted anticancer drugs for better immune stimulation and superior efficacy.

For example, the MEK inhibitor trametinib synergizes with palbociclib to induce a SASP-dependent vascular response that enables tumor infiltration by immune effector cells.

Some tumors are driven by gain-of- function mutations or deletions in KRAS, PI3KCA, or B-Raf proto-oncogenes ( BRAF ) and phosphatase and tensin homologs ( PTEN ), generated through signaling pathways of AKT1, MTOR, or MEK Sexual mitogenic signaling.

Currently, although BRAF, PI3K, MTOR, and MEK inhibitors have been successfully developed into FDA-approved targeted anticancer drugs, KRAS inhibitors have not been licensed for use in humans, and the development of AKT1 inhibitors is in its infancy.

Interestingly, many of these drugs not only limit mitotic signaling in cancer cells, but also mediate a range of therapeutically relevant immunomodulatory effects.

(5) Downregulation of immunomodulatory factors, including IL8, VEGFA, and SPP1.

On the other hand, loss of antigen presentation, TEFF cell exhaustion, and immunosuppressive cell infiltration were commonly observed in preclinical studies when tumors progressed after KRAS, BRAF, or MEK inhibitor therapy.

This partly reflects the critical role of MEK signaling in initiating naive T cell expansion and in protecting tumor-infiltrating CD8+ CTLs from depletion.

This potentially deleterious effect can be avoided or reversed ( at least in part ) with a variety of drugs other than PD-1/PD-L1 blockers, including ( but not limited to )

(4) Enhancers Prebiotics for general immunity, such as inulin.

Consistent with this concept, inhibitors of KRAS and PI3K signaling often exert potent and therapeutically relevant immunostimulatory effects, although in specific cases T cell exhaustion emerges as a resistance mechanism that can be addressed by a variety of immunotherapies other than ICIs. overcome.

Certain malignant tumor cells exhibit a high dependence on cDNA damage repair ( DDR ) mechanisms or robust anti-apoptotic signals, and this dependence has been used to develop targeted anticancer drugs based on the principle of synthetic lethality.

Today, poly( ADP )-ribose polymerase 1 ( PARP1 ) inhibitors are licensed for the treatment of DDR-deficient cancers, such as breast and ovarian tumors with BRCA1 or BRCA2 mutations.

Similarly, BCL2 inhibitors are approved for patients with CLL or small lymphocytic lymphoma ( SLL ). All of these DDR-targeted drugs were shown to mediate therapeutically relevant immunomodulatory effects.

Various FDA-approved and experimental PARP inhibitors have been shown to promote type I interferon secretion in a variety of tumor cells, in some cases concomitant with the release of T-cell chemoattractants ( including CXCL10 ), as well as DCs paracrine activation, ultimately leading to the upregulation of MHC class II molecules and costimulatory ligands to support T cell priming.

Furthermore, PARP inhibitors were associated with PD-L1 upregulation in various cancer cells regardless of BRCA1/2 status, which may be the result of type I interferons or interferon signaling.

In fact, various ICIs have been successfully used to enhance the therapeutic activity of PARP inhibitors in preclinical tumor models.

ATM has been shown to cooperate with PARP1 to activate a non-canonical STING-dependent program centered on NF-kB-driven secretion of type I interferons and IL6. Furthermore, ATM drives breast cancer cells to secrete IL8 independently of its role in the DDR, ultimately promoting disease progression through autocrine or paracrine mechanisms.

Therefore, the ATM/NF-kB signaling axis is not only a target for achieving local immune stimulation, but also a target against cancer cells’ intrinsic disease progression pathways.

DDR-driven BCL2 suppresses one of the major players in apoptosis, p53, which is either genetically or functionally missing in a variety of malignancies and is associated with local immunosuppression.

(1) downregulation of immunoregulatory cytokines, such as IL6, associated with tumor progression;

(3) establishment of immunostimulatory SASPs Associated with cellular senescence, the SASP favors the recruitment and activation of NK cells, TEFF cells, and macrophages.

Over the past two decades, many mAbs and TKIs have been developed to target these proteins or their binding partners, and some of these molecules, including HER2-, EGFR- and VEGFA-specific drugs, have been licensed for multiple tumor indications.

While the safety and efficacy of TGF-β receptor or ligand inhibitors continue to be examined, all of these drugs have been shown to mediate therapeutically relevant immunomodulatory effects.

HER2-targeting mAbs appear to be involved in some degree of CD8+ and CD4+ T cell-dependent HER2-specific immune responses, reflecting at least in part improved antigen presentation on MHC class I and II molecules, and MYD88-dependent immune stimulation , ultimately leading to increased antigen processing and presentation by DCs.

A variety of immunotherapeutics, including DC-based vaccines, TLR2 agonists, recombinant IL21, and PD-L1 blockade, can be used to amplify the efficacy of HER2-targeted mAbs while stimulating robust antitumor immunity.

Various EGFR-targeting agents improve MHC class I antigen presentation by cancer cells and favor the ability of DCs to uptake tumor material and to prime T cells and promote NK cell activation in the absence of additional immune-stimulatory signals.

Consistent with this immunomodulatory signature, TME in NSCLC exposed to EGFR-targeting drugs showed increased abundance of DCs and CD8+ Teff cells, as well as depletion of Treg cells and M2 TAMs.

For example, VEGFA signaling is directly involved in Treg cell expansion and expression of co-inhibitory receptors, including PD-1 of CD8+ CTLs.

In addition, transcriptome analysis revealed that VEGFA levels were inversely correlated with CD8+ CTL infiltration signatures in breast cancer patient biopsies and in preclinical models of breast and colorectal cancer.

Finally, accumulation of immunosuppressive cells, including TAMs , is associated with resistance to VEGFA-targeting antibodies in mouse models of ovarian cancer.

TGF-β is best known for its ability to upregulate PD-L1 in malignant and myeloid cells in the TME, promote PD-1 expression in T cells, and favor the expansion of Treg cells and MDSCs, ultimately leading to local and systemic Immunosuppressive.

Furthermore, TGF-β is closely related to the establishment of immune rejection, a process by which cancer cells bind to cancer-associated fibroblasts to prevent tumor infiltration by immune effector cells.

Inhibition of TGF-β or its receptors resolves immune rejection and improves antigen presentation by malignant cells, ultimately resulting in a potent antitumor immune response that can work with ICIs to eliminate tumors and establish protective immune memory.

Furthermore, despite the central role of TGF-β in the establishment of tumor-associated immunosuppression, a combination regimen of one or more ICIs is required to fully realize the clinical potential of TGF -β inhibitors. In this case, the order of treatment may be a key determinant of success.

Conversely, once PD-1 resistance is acquired, the administration of TGF-β inhibitors produces a potent therapeutic effect.

The list of targeted anticancer drugs approved or in development is constantly growing, such a list includes

However, the basic biological research on the immune regulation of targeted antitumor drugs has just started, and there are still some problems to be solved in this regard.

First, what is the actual specificity of these drugs for their molecular targets? Imatinib, designed to target the kinase domain of ABL1 to inhibit constitutive signaling in BCR-ABL1 chimeras, was found to inhibit multiple clinically relevant kinases.

Along similar lines, abemaciclib is thought to inhibit CDK4/CDK6, but has been shown to target other CDKs as well as CDK-independent kinases.

Thus, while in some cases the immunomodulation of targeted antitumor therapy clearly stems from the targeting effect, in many other cases it stems from surrogate ( often uncharacterized ) other involved molecules.

Especially when immune cells are directly involved, the identification of these alternative targets is very urgent.

Second, what is the exact molecular mechanism at work when immune modulation actually arises from the inhibition of expected molecular targets in malignant cells?

No targeted anticancer drug has been specifically designed to mediate immunomodulatory effects, which means that various proteins that support tumorigenesis also affect the ability of tumor cells to transmit immune-stimulatory or immunosuppressive signals.

For example, active CDK4/CDK6 signaling limits the ability of DNMT1 to drive expression of endogenous retroviral elements that would otherwise promote type III IFN secretion, a pathway that can be acted upon by clinically used CDK4/CDK6 inhibitors.

This is especially important when the immunomodulatory activity of a drug is multifunctional and involves beneficial and detrimental effects that can be exploited differently by targeting downstream signal transducers.

Third, what are the key factors in the differential immunomodulatory effects mediated by certain targeted anticancer drugs in specific settings?

Most drugs are associated with immunostimulatory and immunosuppressive effects, depending on the specific experimental scenario.

However, while in some cases the source of this difference is obvious, in many others the underlying mechanisms remain unclear.

In the latter case, experimental variables such as drug concentration, precise medium composition and timing may have unexpected effects on biological outcomes.

Furthermore, potentially overlooked and/or difficult-to-control sources of heterogeneous genetic, epigenetic, or metabolic origins may have critical implications, especially in vivo. Further studies on the impact of tumor heterogeneity on the immunomodulatory effects of targeted anticancer drugs are required.

Fourth, how can conventional chemotherapy and radiotherapy be used to maximize the ability of targeted antitumor drugs to drive clinically meaningful tumor-specific immune responses?

It is clear that ( at least some ) targeted anticancer drugs are promising combinatorial partners for various immunotherapies, including ICIs.

However, whether the efficacy of these combination therapies can be further enhanced by conventional chemotherapy or RT has not been fully investigated.

In conclusion, only an in-depth understanding of the molecular pathways by which targeted anticancer drugs mediate clinically relevant immune regulation and the envisioning of multimodal therapeutic regimens with favorable immunostimulatory activity can further expand the use of targeted anticancer therapies for oncology indications that achieve clinical benefit.