Seven medical technologies that could transform science in 2022

Seven medical technologies that could transform science in 2022.

Nature : Seven technologies to watch in 2022 provides its fifth annual summary of the tools that could shake up science in 2022, including technologies ranging from gene editing to protein structure determination to quantum computing [ 1]

The human consensus genome sequence GRCh38 , first published in 2013 , is a scaffold for mapping sequences, but they are short and not long enough to unambiguously map highly repetitive genome sequences .

The answer is the long-read sequencing technology developed by Pacific Biosciences in the US and Oxford Nanopore Technologies in the UK , which can sequence tens or even hundreds of thousands of bases in a single read .

By 2020, when the T2T team first recombined the separate X and 8 chromosomes, Pacific Bioscience’s sequencing had already allowed T2T scientists to detect the extent of tiny changes in long stretches of repeats .

The T2T-resolved genome was derived from a cell line containing two identical sets of chromosomes.

There are two versions of each chromosome in the normal diploid human genome, and the researchers are now working on “genotyping” strategies that can assign each sequence to the corresponding chromosome copy .

The diploid assembly work was carried out in collaboration with T2T’s partner organization, the Human Pan-Genome Reference Consortium , which hopes to produce a more representative genome map from hundreds of donors from around the world .

The ability to assemble these complete genomes is expected in the future to generate complete sequences for every vertebrate species on Earth . Over the past two years, experimental and computational advances have allowed researchers to determine the structure of proteins with unprecedented speed and resolution .

Since its public release in July 2021, AlphaFold2 has been applied to proteomic research to determine the structure of all proteins expressed in humans and 20 model organisms, as well as nearly 440,000 proteins in the Swiss-Prot database, greatly increasing the availability of Number of proteins for which high-confidence modeling data were obtained.

The AlphaFold algorithm has also demonstrated its ability to resolve multi-chain protein complexes .

Meanwhile, the development of cryo- electron microscopy (cryo-EM) has allowed researchers to experimentally deal with even the most challenging proteins and complexes .

Cryo-EM uses an electron beam to scan rapidly frozen molecules, generating images of proteins in multiple orientations, which can then be computationally reassembled into 3D structures.

In 2020, improvements in cryo-EM hardware and software allowed the two teams to generate structures with a resolution below 1.5 angstroms, capturing the positions of individual atoms.

AlphaFold2 is now seen as complementary to experimental methods such as cryo-EM , and its computational models can aid in data analysis and reconstruction.

Cryo-EM can generate results that are not currently computationally predictable .

Another related technique , cryo- electron tomography ( cryo-ET ), can capture native protein structures in thin slices of frozen cells , which is also quite exciting.

Atoms are small, but they can be induced into highly excited states with a diameter of one micrometer or more.

By controlling the excitation of arrays of hundreds of atomic arrangements, physicists have demonstrated that they can solve challenging physics problems that push conventional computers to their limits.

Quantum computers process data in the form of quantum bits . Qubits can influence each other over a certain distance through the phenomenon of entanglement in quantum physics. These qubits could dramatically increase computing power .

Multiple teams have successfully used individual ions as qubits , but their electrical charge makes it difficult to assemble at high densities .

Physicists such as Antoine Browaeys of the French National Centre for Scientific Research and Mikhail Lukin of Harvard University in the US are exploring the use of optical tweezers to precisely locate uncharged atoms in tightly packed 2D and 3D arrays, and then apply laser light to excite these particles to large diameters “Rydberg atoms” and entangle them with nearby atoms .

Rydberg atomic systems are individually controllable, and their interactions can be turned on and off, which in turn gives them programmability .

This approach has gained considerable momentum in just a few years, with technological advances improving the stability and performance of Rydberg atomic arrays and rapidly scaling from tens of qubits to hundreds of qubits .

Early applications have focused on posed problems, such as predicting the properties of materials, but their uses are far beyond that.

Pioneers in the field have formed companies that are developing laboratory Rydberg atomic array systems , a quantum simulator that could be commercially available within a year or two.

The work paves the way for wider applications of quantum computers in areas including economics, logistics and encryption, such as encryption of communications . 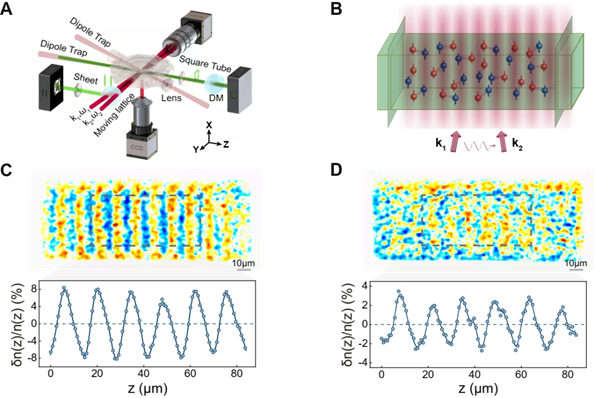 CRISPR-Cas9 technology tends to inactivate genes rather than repair them .

This is because cells are imprecise in the repair of the double-strand cleavage produced by the Cas9 enzyme targeting genomic sequences. CRISPR-Cas9 repair is often messed up by small insertions or deletions .

Harvard chemical biologist David Liu points out that most genetic diseases in humans require gene modification rather than gene inactivation .

Their team has developed two methods to do gene modification . Both methods take advantage of the precise location of CRISPR, but a variant of Cas9 that cannot function to cut DNA at that site.

The first, called single-base editing, combines a catalytically impaired form of Cas9 (Dcas9 or Cas9 nikase) with another enzyme (a DNA-modifying enzyme) to help convert one nucleotide into another, But currently only some specific base-to-base changes can be made using this method (see Nature https://doi.org/hc2t;2016)).

The team recently developed guide editing, linking Cas9 to reverse transcriptase, and using a modified guide RNA that integrates the desired editing into the genome sequence [4] .

Through a multi-stage biochemical process, these components replicate the guide RNA into the DNA that ultimately replaces the target genomic sequence.

Importantly, both methods cut only one strand of DNA , a safer and less destructive process for cells .

Single base editing was first reported in 2016 and has now entered the clinic . Guide editors are also constantly being upgraded . 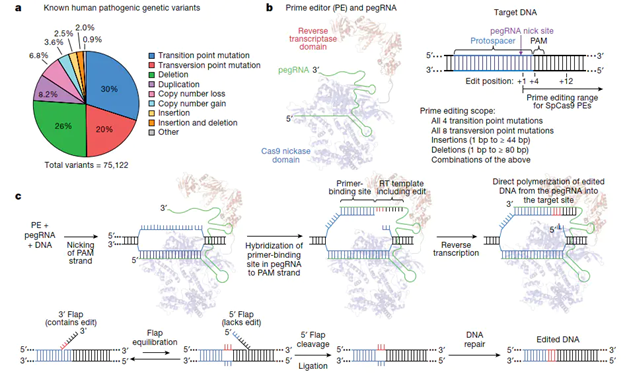 Although nucleic acid-based drugs have clinical value, the tissues in which they can be applied are still greatly limited .

Most treatments are either administered locally or in which cells are harvested from a patient ex vivo and then transplanted back into the patient.

Adeno-associated viruses are the vector of choice for many gene therapies , and animal studies have shown that careful selection of the appropriate virus, combined with tissue-specific gene promoters, can result in efficient delivery to specific organs.

But viruses are sometimes difficult to produce on a large scale, and they can also trigger immune responses that undermine efficacy or produce adverse events.

Lipid nanoparticles are a non-viral alternative , and several studies published over the past few years have highlighted the potential to modulate their specificity.

The Selective Organ Targeting (SORT) method developed by biochemist Daniel Siegwart of the University of Texas and others can help to rapidly generate and screen lipid nanoparticles to identify nanoparticles that can effectively target tissue cells such as the lung or spleen.

Many groups are also exploring how to use protein components such as cell-specific antibodies to aid in the targeting process.

Exciting preclinical advances in targeting blood and immune cell precursors in the bone marrow are being made by companies such as Beam Therapeutics and Intellia, both of which use specially designed lipid nanoparticles whose successful targeting will allow patients to avoid current treatments including chemotherapy The painful process involved in in vitro gene therapy. 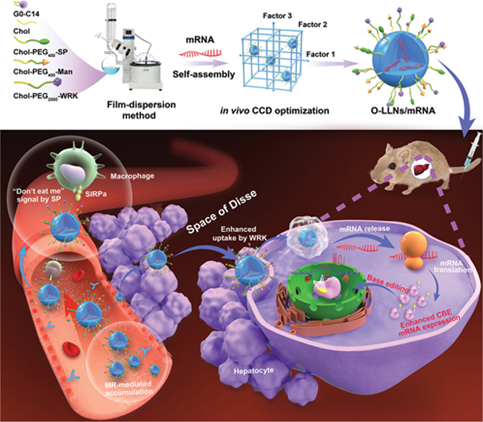 Advances in single-cell omics allow researchers to routinely obtain genetic, transcriptomic, epigenetic, and proteomic insights from individual cells, but this technique is also missed by stripping cells from their original environment key information .

The big explosion in the field of spatial transcriptomics began in 2016, when Joakim Lundeberg’s team at the Royal Institute of Technology in Sweden prepared slides of barcoded oligonucleotides ( short strands of RNA or DNA ) that could be obtained from whole tissue sections The messenger RNA is captured in the so that each transcript can be mapped to a specific location in the sample based on its barcode .

Researchers are overlaying omics data in their spatial maps , such as the DBiT-seq 16 platform developed by Yale University Rong Fan using a microfluidic system that can simultaneously transcribe thousands of mRNA samples and hundreds to label oligonucleotides. Antibody-tagged proteins generate barcodes, which allow a more accurate assessment of how cellular gene expression affects protein production and activity . They are also using the platform to study processes such as immune cell activation .

Commercial systems, including the Visium platform and Nanostring’s GeoMx system, can also capture transcriptomic information at the same time as spatial data from multiple proteins. 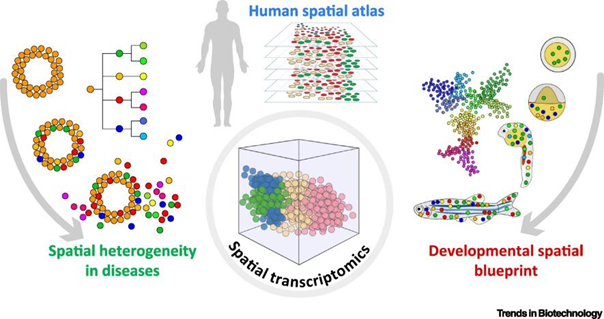 Figure 6 The application of spatial transcriptomics [6]

The CRISPR-Cas system can precisely cut specific nucleic acid sequences , and this ability comes from the role of the “immune system” of bacteria to resist viral infection , so the system also has applicability for virus diagnosis .

But not all Cas enzymes work the same. Cas9 is the enzyme of choice for CRISPR-based genome manipulation, but CRISPR – based diagnostics mostly use the Cas13 family of targeted RNA molecules , which was discovered in 2016 by molecular biologist Feng Zhang and his team.

Cas13 utilizes guide RNA to recognize RNA targets through base pairing and activate ribonuclease activity, which can be used as a diagnostic tool through reporter RNA .

Cas13 serves as a viral diagnostic tool because it doesn’t just cut the RNA targeted by the guide RNA, it also makes “incidental cuts” of other nearby RNA molecules.

Many Cas13 – based diagnostics use a reporter RNA that attaches a fluorescent tag to an inhibitory fluorescent quencher molecule . When Cas13 recognizes viral RNA and is activated, it cleaves the reporter gene and releases the fluorescent tag from the quencher group, producing a detectable signal.

Some viruses emit strong signals that can be detected without amplification, simplifying point-of-care diagnosis . In January last year, researchers demonstrated a rapid nasal swab-based CRISPR-Cas13 assay for the detection of non-amplifying SARS-CoV-2 .

RNA amplification can improve sensitivity to minute amounts of viral sequences , geneticist Sabeti at the Broad Institute of MIT-Harvard and her colleagues have developed a microfluidic system that uses amplification from only a few microliters of sample. By adding genetic material, multiple pathogens can be screened simultaneously .

They also developed CRISPR-based tools that can detect more than 169 human viruses simultaneously.

Other Cas enzymes , including DNA-targeting Cas12, could enrich diagnostic toolboxes, detect a wider range of pathogens, and even be effective in diagnosing other non-communicable diseases .

Seven medical technologies that could transform science in 2022