On May 14, The Lancet published an editorial objecting to a draft opinion intended to deny women the right to a safe abortion. 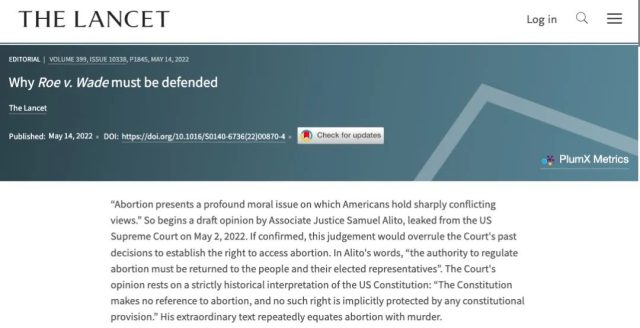 Earlier on May 2, the US Supreme Court leaked a draft opinion of Associate Justice Samuel Alito. Samuel Alito argues that abortion is equivalent to murder and that American women should not have the right to abortion.

The Lancet argues that laws should be made taking into account the course of history, in an age where unintended pregnancies and miscarriages are common among women.

There are approximately 120 million unintended pregnancies worldwide each year, of which three out of five are abortions. And of those abortions, only about 55 percent were performed using a medically recommended method and performed by a trained physician.

That said, 33 million women worldwide receive unsafe abortions every year because the law does not allow them to access safe abortion care.

The Lancet said that if the U.S. Supreme Court passed Samuel Alito’s draft opinion, it would not end abortion, but only “safe abortion.”

The blood of women will be on the hands of Samuel Alito and his supporters.

The following is a compilation of the full text of this Lancet article.

The issue of abortion is an esoteric moral issue, and Americans have very different views on it.

On May 2, the U.S. Supreme Court leaked a draft opinion of Associate Justice Samuel Alito. If the draft is passed, it would overturn past court decisions on abortion rights.

Samuel Alito said: “The power to regulate abortion must be returned to the people and their elected representatives. Previous court opinions on abortion were based on historical interpretations of the limitations of the U.S. Constitution.

The Constitution makes no mention of abortion, and no constitutional provision implicitly protects this right. “In Samuel Alito’s text, abortion is repeatedly equated with murder.

The basis for support for American women’s right to abortion has always been the Fourteenth Amendment to the U.S. Constitution.

Passed during Reconstruction in 1868, when states were limited in their power, the purpose of this amendment was to prevent states from unduly restricting the liberties of their citizens. This guarantee of individual liberty “extends” to the pregnant woman who decides to have an abortion.

And Samuel Alito believes that this “extension” is not correct.

“For any rights not mentioned in the Constitution to be protected, they must have deep roots in the country’s history and tradition, and abortion does not meet that standard.

To make matters worse, abortion rights exercise “primitive judicial powers” that shorten the democratic process and go horribly wrong from the start. Now, it’s time to get back on track. “

What is shocking, inhumane and unreasonable in Samuel Alito’s draft opinion is that its arguments are based on an 18th century document that knows nothing about the state of women in the 21st century.

History and traditions should be respected, but they are only part of the guideline. The law should be able to adapt to new and previously unforeseen challenges and dilemmas.

While Samuel Alito provides an exhaustive legal history of abortion, he completely ignores the health of women seeking abortion today.

There are approximately 120 million unintended pregnancies worldwide each year, of which three out of five are abortions. And of those abortions, only about 55 percent were performed using a medically recommended method and performed by a trained physician.

That is, 33 million women worldwide receive unsafe abortions every year because the law does not allow them access to safe abortion care. Their lives are in danger.

In fact, if the US Supreme Court passed Samuel Alito’s draft opinion, many women would die.

Voting for Samuel Alito will not end abortion, it will only end “safe abortion”.

The blood of women will be on the hands of Samuel Alito and his supporters.

In 2018, the Guttmacher-Lancet Commission on Sexual and Reproductive Health and Rights concluded that rights such as access to safe abortion care and treatment of complications from unsafe abortions are central to women’s well-being and gender equality.

Basic sexual and reproductive health interventions should be a fundamental right of all women.

What kind of society would America be like if a small group of judges were allowed to harm women, their families, and the communities they were appointed to protect?

The way forward is unclear and dangerous. The debate suggests that a range of civil rights, from marriage equality to contraception, could come under attack in the future.

Despite urgent calls from some members of Congress, the chances of a Biden administration enshrining the long-overdue abortion right into law are slim.

It would be unusual for a court to force a health policy approved by only 39% of Americans.

If the court denied women the right to a safe abortion, it would be judicial recognition that “the state has control over women”.

This would be an alarming step backward in women’s health and rights, with global repercussions.