Human beings have unique cognitive abilities among thousands of lives.

Why are our brains smarter than all other life? This question is full of endless charm, and it also attracts scientists to give answers from different angles.

And now, a study published in Nature Neuroscience offers a new perspective from the perspective of information processing.

How does our brain process information? Our understanding of this issue is constantly changing as research progresses.

Current theories suggest that the brain is a distributed information processing system: it is made up of closely linked different “elements”, or brain regions, and that the interaction of information between these different regions is achieved through a system of input and output signals.

But that’s only part of the answer. In the latest study, a research team from the University of Cambridge broke down the information processing between brain regions into two categories.

At this time, differences in the way we process information from other primates partly explain the origin of our distinctive cognitive abilities.

Let’s first look at the first information processing method mentioned earlier. This approach exists in functional areas that process information such as hearing, vision, and movement.

These brain regions rely on a strict input and output pattern to exchange information, which ensures repeatable and reliable transmission of information.

Taking vision as an example, after our eyes receive information, it sends the information to the occipital lobe area at the back of the brain.

But the information provided by the two eyes is largely duplicated, that is, the corresponding areas of the brain receive a large amount of “redundant” information input.

For example, if you only see a tree with your left eye, if you replace it with two eyes, you will still see a tree. This type of processing is called “redundant” (also known as “shared”) information processing.

The existence of redundancy obviously makes sense. It ensures the repeatability and reliability of the information, even if the information of one eye is wrong, the other eye can transmit the information to the brain. This ability is critical to the survival of the species.

In this case, the connection between the different areas has a fixed line, just like a landline that requires a telephone line.

But when you see this, you may already be thinking: the information seen by both eyes is not all redundant. This is the second case to be described next.

Certain types of visual information require the cooperation of both eyes to receive. For example, one eye can see a tree, but to know how far it is from us requires information from both eyes.

This is the second type of information processing that is different from “redundancy”: “synergy” (or “complementary”), that is, a network of different areas of the brain that achieves more complex information integration. 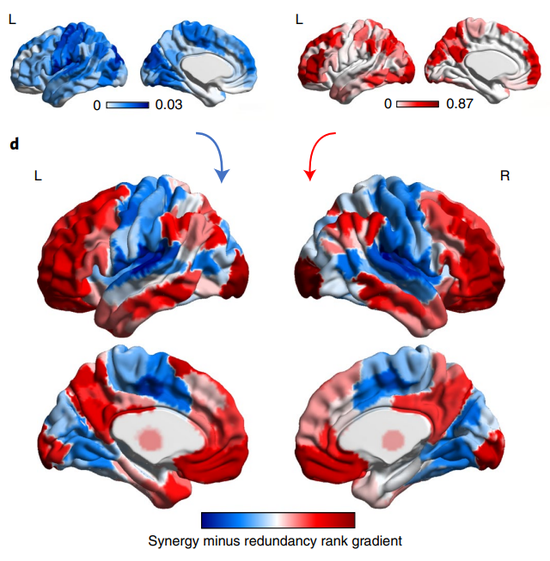 This co-processing is most prevalent in brain regions that support more complex cognitive functions such as attention, learning, working memory, socializing, and more.

If the “redundant” approach is a landline, the “collaborative” approach is closer to a mobile phone. Areas where synergy occurs abundantly, including the anterior and middle cortex, integrates information from different brain regions.

As a result, these areas are more commonly and efficiently connected to the rest of the brain than sensory and motor areas.

So, is the difference in the proportion of these two information processing methods what makes us stand out?

In the brain imaging comparison, a key finding of the research team is that the proportion of cooperative information processing in the human brain is higher than that in the macaque brain. 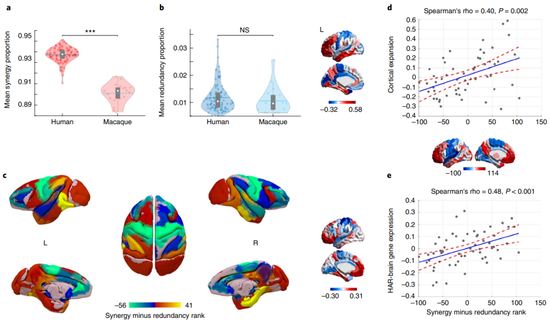 In addition, the study focused specifically on differences in the prefrontal cortex, a brain region that supports higher-order cognitive functions.

Along with the evolutionary process, there has also been a marked expansion of the prefrontal cortex.

Comparing the brains of humans and chimpanzees, it was found that compared with chimpanzees, areas of the human brain that expanded more significantly depended more heavily on collaborative processing.

Taking these findings together, this study points to the possibility that newly acquired brain tissue may have been primarily used for cooperative information processing during the evolution of primates to humans.

The advantages brought by this information processing method also allow us to acquire cognitive abilities far beyond those of our closest relatives.

This long-lost answer also brings us one step closer to fully understanding the human brain and cognition.