At present, tumor immunotherapy is in the ascendant, and one of the most effective treatment strategies is adoptive cell transfer therapy ( ACT ).

Chimeric antigen receptors ( CARs ) and engineered T-cell receptors ( TCRs ) have been the mainstay of adoptive T-cell immunotherapy in recent years.

Immunotherapy based on NKT cells has shown promising therapeutic effects in preclinical, but no obvious effect has been achieved in clinical treatment.

At present, some new treatment strategies are being developed and applied to NKT cell therapy, which is expected to achieve breakthroughs in future clinical treatment.

NKT cells are a subset of lipid- and glycolipid-responsive T lymphocytes that co-express markers associated with NK cells ( NKp46, NK1.1 ).

Based on TCR rearrangement and glycolipid reactivity, NKT cells can be divided into two major subpopulations: type I and type II NKT cells.

Type II NKT cells have more diverse Vα rearrangement sequences ( including TRAV7, TRAV9, and TRAV12 ) that help recognize self lipids, such as cerebroside sulfate or lysophosphatidylcholine. 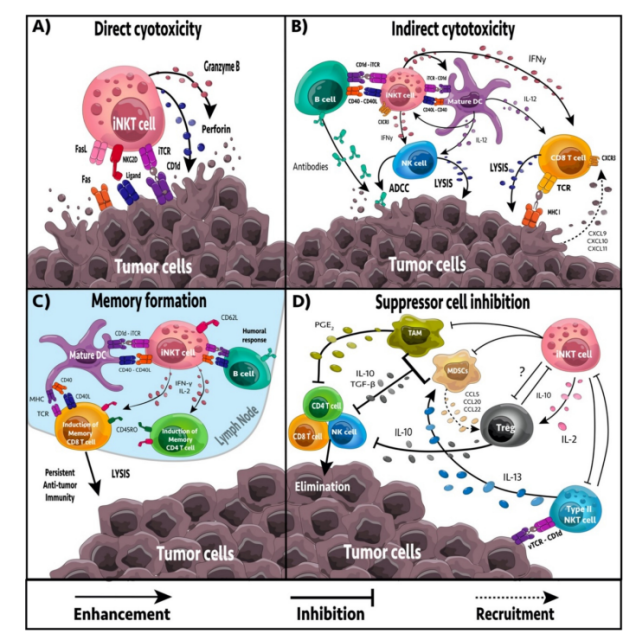 In the absence of CD1d expression on tumor cells, iNKT cells may be activated by CD1d+ APCs, including dendritic cells ( DCs ), B cells, myeloid-derived suppressor cells ( MDSCs ), and tumor-associated macrophages ( TAMs ).

TAMs are immunosuppressive immune cells that frequently occur in the TME.

TAMs contribute to tumor progression and inhibition of NK, iNKT and T cell responses. In neuroblastoma, iNKT cells can colocalize and lyse TAMs through a CD1d-dependent mechanism.

In an influenza A infection model, iNKT cells could inhibit arginase-1 and NOS2-mediated inhibitory activity of MDSCs in a CD1d- and CD40-dependent manner.

In addition, NKT cells can stimulate the conversion of α-GalCer-loaded MDSCs into mature APCs capable of inducing NK and T cell immune responses.

The formation of tumor immune memory

The generation of immune memory is critical for durable antitumor immune responses and prevention of tumor recurrence.

Due to the important role of iNKT cells in immune surveillance and antitumor immunity, iNKT cell-based immunotherapy has become an important research area, and various strategies have been used to target cancer.

In preclinical trials, free [alpha]-GalCer may be administered prophylactically, concurrently or after tumor inoculation.

Although administration of free α-GalCer after tumor inoculation had some antitumor effect in multiple mouse models, the antitumor response was limited.

Therefore, free α-GalCer is often used in combination with cytokines or other immunotherapies to enhance the therapeutic effect.

In phase I clinical trials, administration of α-GalCer was well tolerated with no dose-limiting toxicities; however, it failed to produce a clinical response, with only 7 SDs out of 24 patients.

α-GalCer-loaded DCs have been used to overcome the low immunogenicity and anergy induction of free α-GalCer.

Loading α-GalCer onto DCs resulted in stronger activation of iNKT cells and less induction of anergy due to co-stimulatory signaling by CD40 and IL-12.

In clinical trials in myeloma and head and neck cancer, mature α-GalCer-loaded APCs were well tolerated with no serious adverse events.

Treatment increased IFN-γ production and expansion of iNKT cells, resulting in stable disease and prolonged median survival in many patients.

Treatment with α-GalCer-loaded APCs was well tolerated in phase I and I/II clinical trials in non-small cell lung cancer, resulting in only grade I and II adverse events.

To overcome this limitation, iNKT cells have been isolated from patient-derived PBMCs and adoptively transferred back to patients after in vitro expansion.

In contrast, in the metastatic 4T1 breast cancer model, adoptive NKT cells alone or in combination with free α-GalCer therapy or α-GalCer-loaded DC did not improve prognosis.

No serious adverse events have been reported in clinical trials using adoptive transfer of iNKT cells for the treatment of non-small lung cancer and advanced melanoma.

Patients had increased numbers of circulating iNKT cells and IFN-γ production, but few patients had decreased tumor progression, suggesting that the treatment was ineffective.

The role of iNKT cells in recognizing conserved lipid antigens presented through CD1d and their ability to coordinate antitumor immune responses through cytokine signaling make them attractive targets for cancer vaccine development.

Ligands of iNKT cells, such as α-GalCer, can be used together with tumor antigens to act as adjuvants to increase adaptive immune responses against tumors.

CD1d-positive tumors are more susceptible to iNKT cell-mediated lysis, whereas CD1d downregulation is a common evasion strategy to avoid detection.

iNKT cells have been engineered to express CARs targeting glycolipid and protein antigens. Furthermore, in addition to CAR, CAR-NKT cells co-expressed a constant TCR, maintaining their responsiveness to glycolipid antigens.

In contrast, the endogenous TCR in CAR-T cells is polyclonal, and most CAR-T cells can only respond through their CAR. 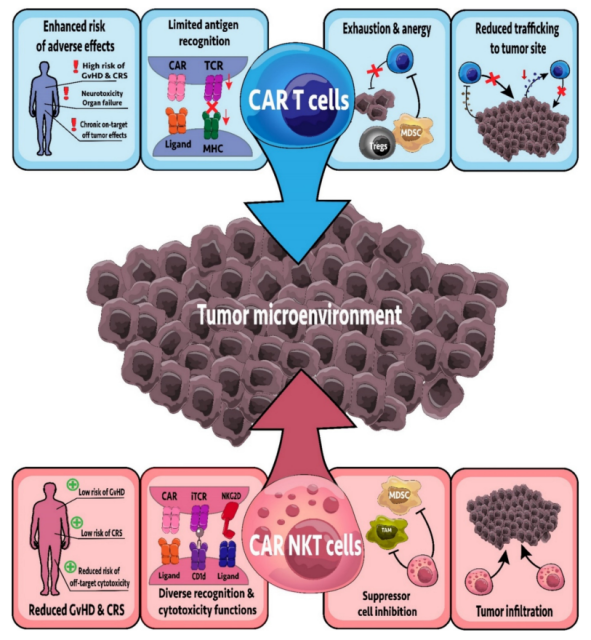 A Phase I clinical trial ( NCT03294954 ) has begun to test the efficacy and safety of anti-GD2 CAR-NKT cells in refractory neuroblastoma.

Preliminary results showed that the treatment of 10 enrolled patients was safe, including 1 complete response, 1 partial response, and 3 patients with stable disease.

Of the two patients in the phase I trial, one showed a complete response and the other a partial response, and neither patient had any signs of CRS or GvHD.

Importantly, the CAR-NKT cells used in this study were allogeneic, demonstrating the potential for “universal” therapy.

One way to improve existing treatments is to combine them with other treatments that produce a synergistic response.

In preclinical trials, iNKT cell immunotherapy has been tested in combination with chemotherapy, oncolytic viruses and other immunotherapies.

To date, lenalidomide is the only chemotherapy drug used in combination with iNKT cell immunotherapy in clinical trials.

In a phase I clinical trial, patients with asymptomatic myeloma received α-GalCer-loaded DC in combination with lenalidomide.

Treatment was well tolerated, with only one patient experiencing grade 3 adverse events.

Furthermore, the expression of NKG2D was significantly increased on NK cells, indicating an increased cytotoxic potential of NK cells.

Overall, treatment resulted in lower tumor-associated immunoglobulins in all but one patient, suggesting that treatment reduced tumor burden.

The success of the combination therapy underscores the need for further clinical trials.

In combination with oncolytic virus

To date, no clinical trials have combined oncolytic viruses with iNKT cell immunotherapy.

However, clinical trials suggest that oncolytic viruses can improve the effects of other immunotherapies.

An interesting option for combination therapy is the combination of iNKT cell therapy and immune checkpoint inhibitors.

After activation of iNKT cells by α-GalCer, a large amount of IFN-γ is released, followed by increased PD-1 expression, resulting in anergy and inhibition of antitumor function.

Therefore, the combination of iNKT cell immunotherapy and checkpoint inhibitors that block the PD-1/PD-L1 axis may improve the therapeutic effect.

A clinical trial is testing a combination of PD-1/PDL-1 blockade and iNKT cell immunotherapy ( NCT03897543 ).

The biggest challenge for iNKT cell immunotherapy is the low infiltration and reduced function of iNKT cells in cancer patients.

Combined with the downregulation of CD1d in tumor cells, therapeutic efficacy may be limited.

Another challenge is obtaining large numbers of autologous DC and iNKT cells from immunosuppressed cancer patients, thereby limiting the number of cells that can be expanded and adoptively transferred.

In addition, adoptive transfer of cultured and differentiated cells takes weeks, leaving some patients unable to receive treatment or dying of the disease.

To address these challenges, many studies have improved iNKT cell immunotherapy.

Due to the inefficiency of free α-GalCer and the difficulty in obtaining large numbers of autologous DCs, several studies have examined the possibility of α-GalCer delivery via carriers such as nanoparticles, artificial antigen-presenting cells, exosomes, and liposomes .

This is mainly due to increased uptake and expression by DC cells, as well as increased downstream NK and CD8+ T cell responses.

7DW8-5 is a candidate glycolipid with a short acyl chain terminated by a fluorinated benzene ring.

Compared with α-GalCer, 7DW8-5 has a stronger affinity for CD1d and TCR of iNKT cells, and stimulation of iNKT cells with 7DW8-5 increases Th1 and CD8+ T cell responses in various vaccine models.

Furthermore, it is difficult to obtain sufficient PBMCs from immunosuppressed cancer patients to expand and deliver iNKT cells in vitro.

One coping strategy is to use induced pluripotent stem cells ( IPSCs ) from patient tissue.

iNKT cells and type II NKT cells play opposite roles in tumor immune regulation and cross-regulate each other.

Compared with CAR-T cell therapy, NKT cell therapy has a longer duration of action and is more capable of inhibiting cancer recurrence and metastasis.

It may become an important treatment for solid tumors and other cancers.

Although, there is still no breakthrough in clinical research, some new therapeutic strategies, including carrier-based α-GalCer, alternative glycolipids, and combination therapy, are showing improved preclinical outcomes.

With the continuous breakthrough of immune cell therapy for solid tumors, the NKT cell immunotherapy industry will develop rapidly, and it is believed that NKT cell-based immunotherapy will shine brightly in the future.