According to the 2020 global cancer burden data released by the World Health Organization’s International Agency for Research on Cancer (IARC) , esophageal cancer is the 8th most common malignant tumor in the world and the 6th leading cause of annual deaths.

Esophageal adenocarcinoma has a poor prognosis, with a 5-year survival rate of less than 20%. This is largely because of chemotherapy resistance, with 80% of patients not responding to chemotherapy.

The PDE5 inhibitor used in this study was vardenafil , developed by Bayer and GSK for the treatment of erectile dysfunction (ED) in men . 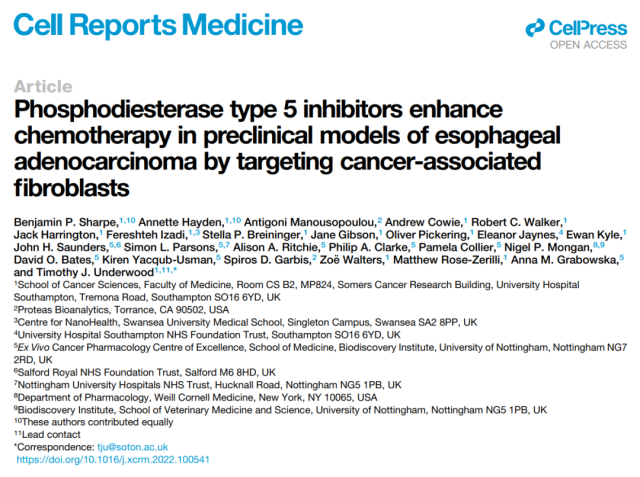 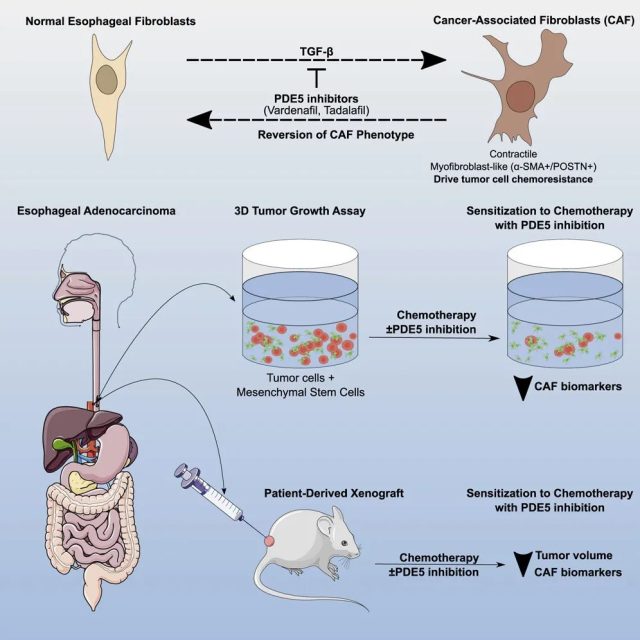 Chemotherapy resistance in esophageal cancer is influenced by the tumor microenvironment , such as cancer-associated fibroblasts (CAFs) , which are important for tumor growth, provide nutrients to the tumor, and can play a protective role in preventing chemotherapeutic drugs from being effective.

Meanwhile, high expression of PDE5 was associated with poor overall survival, suggesting that PDE5 may be an effective therapeutic target for esophageal adenocarcinoma. 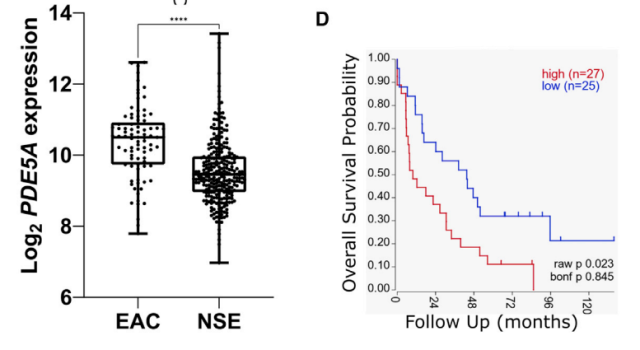 The research team then tested a PDE5 inhibitor (PDE5i) in CAFs of esophageal cancer tumors .

The results showed that PDE5i was able to inhibit CAF activity, making them look more like normal fibroblasts.

Next, the research team extracted tumor cell samples from 15 tissue biopsy samples from 8 patients with esophageal adenocarcinoma, cultured them, and then tested the combination therapy of PDE5i and standard chemotherapy on these cultured tumors. 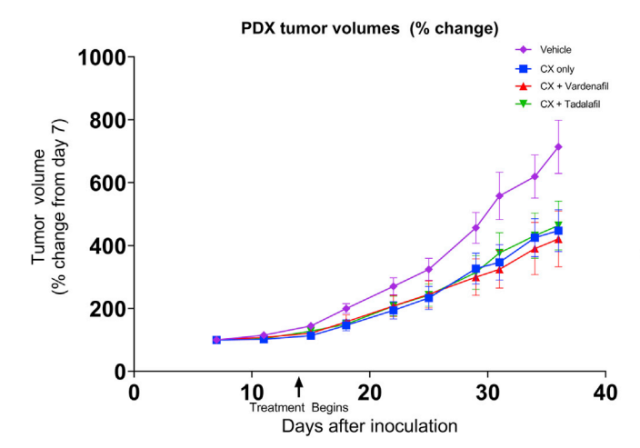 One benefit of using a PDE5 inhibitor is that it has been shown to be a safe and well-tolerated drug and is widely used in patients around the world.

In April 1991, the clinical study of sildenafil officially failed. But the researchers found that the volunteers who participated in the study were reluctant to return the remaining drugs.

When pressed, the volunteers said that the drug improved their sex life.

The researchers at Pfizer then changed direction and investigated the effect of sildenafil on the smooth muscle of the corpus cavernosum.

Sildenafil was approved by the FDA in 1998 for the treatment of male erectile dysfunction (ED) . Since then, other PDE5 inhibitors , vardenafil , avanafil , and tadalafil , have been launched one after another.

The study’s corresponding author, Professor Tim Underwood from the University of Southampton, said chemoresistance in esophageal cancer meant that even high-intensity chemotherapy did not work for many patients.

And this research has found a safe drug that is already widely used, which could be a huge step forward in tackling the intractable disease of esophageal cancer.

With the safety of these drugs confirmed, and the positive results of this preclinical study, the research team said the next step would be to conduct a Phase I/II clinical trial to test PDE5 inhibitors in combination with chemotherapy in patients with advanced esophageal cancer .

If the clinical trial is successful, many patients with esophageal cancer will be saved, and the study may also pave the way for the application of PDE5 inhibitors in other cancer types.