Major medical journals: Depriving women of the right to abortion is a setback for medical health and society.

On June 24,  the U.S. Supreme Court ruled to overturn the Roe v. Wade Act, which first took effect in 1973 and made abortion legal in the United States.

Overturning the ruling would mean denying the right to abortion as a constitutional right and leaving the legality of abortion to state governments, according to The Wall Street Journal.

Before the Supreme Court ruling, the debate in American society over women’s abortion rights was already rampant. Earlier on May 2, the US Supreme Court leaked a draft opinion of Deputy Justice Samuel Alito, which stated: “Abortion is equivalent to murder, and American women should not have the right to abortion.”

From the outflow of the Supreme Court’s anti-abortion draft to the current US Supreme Court overturning the Roe v. Wade case, ” The Lancet “, ” NEJM “, ” BMJ “, “Science” ( Science )” and other top journals have published articles on their front pages, criticizing the decision to restrict abortion as a deprivation and violence of women’s health and social rights. 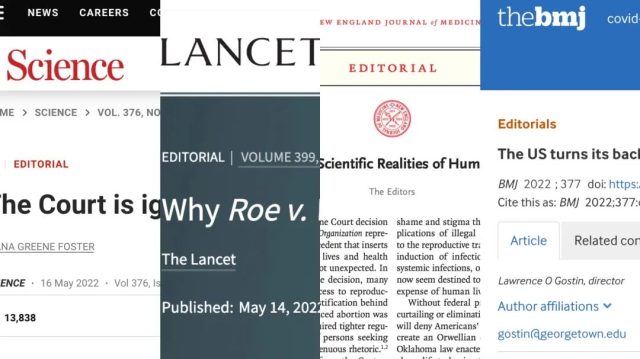 The Lancet: Supporters of the bill will have women’s blood on their hands

Shortly after the anti-abortion draft came out, the Lancet published an editorial on May 14 expressly opposing the court’s denial of women’s right to a safe abortion: The draft was shockingly inhumane and unreasonable, and the court’s decision was based on a An 18th century document that knows nothing about the reality of women in the 21st century.

The Lancet: Why Roe v. Wade must be defended

The Lancet argues that laws should be made taking into account the course of history, in an age where unintended pregnancies and miscarriages are common among women.

There are approximately 120 million unintended pregnancies worldwide each year, of which three out of five are abortions.

And of those abortions, only about 55 percent were performed using a medically recommended method and performed by a trained physician.

That said, 33 million women worldwide receive unsafe abortions every year because the law does not allow them to access safe abortion care.

The Lancet proposes that if the U.S. Supreme Court passes Samuel Alito’s draft opinion (the anti-abortion draft), such an approach will not end abortion, but only “safe abortion.”The blood of women will be on the hands of Samuel Alito and his supporters.

The move is a shocking setback for women’s health and rights, with global ramifications.

Science : Supreme Court should make decisions based on science, not conjecture

On May 16, Science published an editorial on the front page, making it clear that the court was ignoring science.

The authors of the article conducted a study called Turnaway, which followed nearly 1,000 women in the United States for 5 years to explore the impact of abortion or denial of abortion on women’s physical health, mental health, financial well-being, relationships and children. influences.

Women who were unable to get an abortion said they faced more anxiety symptoms, lower self-esteem, lower life satisfaction, and lower health outcomes.

Also, they have more difficulty connecting with their babies, whose children are less developed and more likely to live in poverty.

The authors noted that the study included a large amount of statistically significant data and was the basis for more than 50 studies published in high-quality peer-reviewed scientific journals.

The results of this study show that people know what is best for themselves and their families.

The U.S. Supreme Court should not ignore these scientific results and base its decisions on scientific facts, not conjectures.

Following The Lancet and Science , on May 17, the BMJ published an editorial arguing that sweeping restrictions on abortion would increase social inequality and increase the number of deaths. 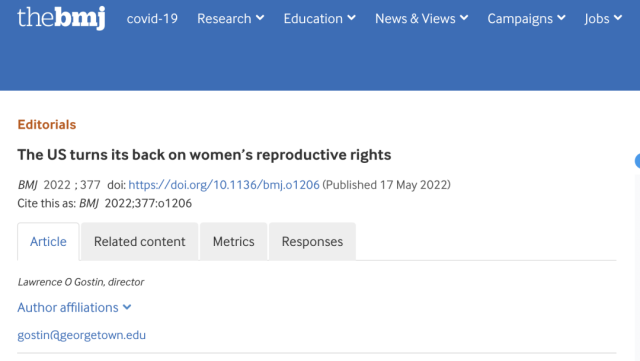 BMJ : America has turned its back on women’s reproductive rights

The article proposes that once the Supreme Court has stripped women of their right to abortion, devolving the decision to state governments, meaning that only women who can afford it can travel to states that allow abortions for surgery, while women who cannot afford the cost cannot afford to take time off. , travel and childcare costs.

If abortion were to be banned altogether, many women would be forced into unwanted pregnancies, and pregnancy-related deaths were expected to increase by more than 20 percent.

Abortion medications (mifepristone and misoprostol) are now easily available via telemedicine and patients can safely self-abort at home.

If the sale of all abortion drugs is banned, it can become very dangerous for patients to spontaneously miscarry.

Also, the anti-abortion draft violates human rights. Human rights law guarantees the physical, sexual and reproductive health of individuals against coercion and discrimination and is based on bodily autonomy and self-determination.

The United Nations Committee on the Elimination of Discrimination against Women also considers the denial or delay of safe abortion and the forced continuation of pregnancy as a form of gender-based violence.

The article argues that 16 states and Washington, D.C., are currently writing legal abortion into law, but some conservative states are closing all access to legal abortion.

Amid a broader push for women’s reproductive and health rights, the United States is rapidly becoming an outlier.

NEJM : This move is an astonishing step backward in the right of individuals to health care, strongly condemns

On June 24, after the U.S. Supreme Court overturned the “Roe v. Wade” ruling , NEJM posted on the front page: This move is an astonishing retrogression to the U.S. government’s interference in personal life and health care rights. 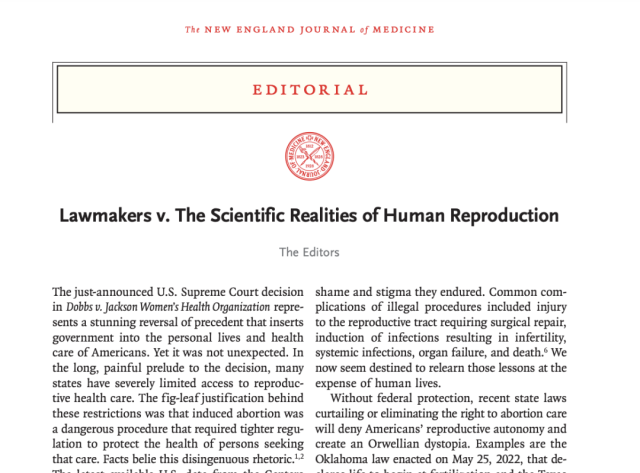 A recent article in The New York Times described how women before Roe v. Wade had abortions: they were subjected to unsafe abortions in humiliating alleys and endured deep shame.

The NEJM said that with the Supreme Court ruling overturning Roe v. Wade, it means we now seem destined to relearn the lessons of the past at the cost of our lives.

For nearly 50 years, Americans have lived under the protection of Roe v. Wade , and today’s behavior is a step backwards.

The most privileged segments of American society will always be able to bypass restrictive laws and find abortion services in permissible jurisdictions, but the costs will be unaffordable for lower-income groups, and these changes will inevitably exacerbate our growing wealth And the huge gap that already exists in terms of health.