The monkeypox virus has spread rapidly outside Africa in the past two months, infecting more than 2,000 people in more than 30 countries.

There are two major questions that need to be answered in this round of monkeypox virus transmission:

Long-term studies of sexually transmitted infections (STIs) and earlier studies of the current monkeypox outbreak suggest that the answers to these two questions may be related : monkeypox virus may have entered a highly active sexual network in MSM populations, where monkeys Poxviruses spread rapidly in ways that cannot spread in the general population .

This view is supported by an epidemiological modelling study recently published on the preprint platform medRxiv by researchers from the London School of Hygiene and Tropical Medicine (LSHTM) .

Their modeling studies suggest that if transmission is not contained, monkeypox outbreaks will continue to grow rapidly among MSM groups, with a high probability of more than 10,000 infections. It also shows that the risk of continued transmission of monkeypox virus in the general population is low . 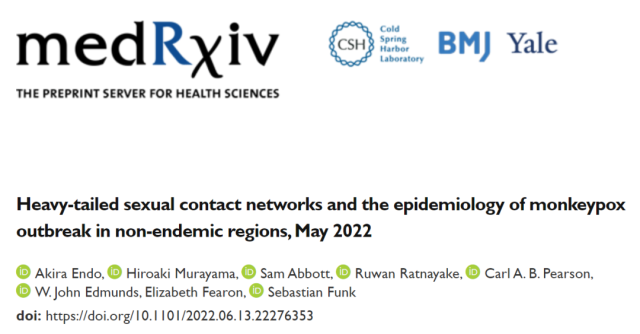 Monkeypox , a zoonotic disease that was first identified in monkeys used for research in 1958, is mainly transmitted in animals.

Human monkeypox cases were first identified in the Congo (DRC) in 1970, and monkeypox has been endemic in several African countries since then, including Nigeria, the Democratic Republic of the Congo , and the Central African Republic.

However, since the beginning of May this year, more than 2,000 cases of monkeypox have been detected in more than 30 countries and territories where monkeypox is not normally present.

In the current monkeypox outbreak, the vast majority of infected people are men who have sex with men (MSM) .

For example, researchers from the UK Health Security Agency released a briefing on June 10 showing that 151 of 152 infected people said I am a man who has sex with men (MSM) and the other 1 refused to answer.

The situation of infected people in other countries is similar.

Lilith Whittles , an infectious disease modeller at Imperial College London , said it could also be a source of statistical bias, as men who have sex with men are generally more connected to doctors than heterosexual men, meaning they are more likely to report monkeys acne symptoms and get tested.

But most researchers don’t think this bias is enough to explain the surprising difference.

Because while some monkeypox infected people may be missed because of mild symptoms, many infected people have very noticeable and distressing symptoms that often require hospitalization.

If there are a lot of monkeypox infections in groups other than MSM, it is statistically impossible to ignore.

Taking the UK Health Security Agency’s June 10 briefing as an example, 151 of 152 monkeypox infected people were MSM, 45 of whom were surveyed about sexual behavior, and 20 of them (44%) were Of more than 10 sexual partners in the last three months, 20 (44%) had group sex during the incubation period of monkeypox virus infection .

This frequent switching of sexual partners and having multiple partners at the same time among men who have sex with men has contributed to the accelerated spread of the virus.

Similar patterns have historically occurred with other infectious diseases, such as the 2000s outbreak of methicillin-resistant Staphylococcus aureus infection in the United States, which also initially spread among MSM groups and then gradually spread .

At present, many countries have launched emergency monkeypox vaccination campaigns, such as the smallpox vaccine Jynneos developed by Bavarian Nordic, which was approved by the US FDA in 2018.

This vaccine is used to prevent smallpox and monkeypox (monkeypox) infections in high-risk adults over the age of 18.

The UK will start offering vaccines to men who have sex with men who have the highest risk of contracting monkeypox, including recent multiple same-sex sexual partners, recent participation in group sex behavior, and bacterial sexually transmitted disease infection within the last year.

Based on currently available data, the monkeypox outbreak is an outbreak focused on MSM groups .

Demetre Daskalakis , an HIV prevention expert at the CDC , said monkeypox can be infected by anyone, but it’s mostly seen among men who have sex with men.