Due to the limited regenerative capacity of the adult mammalian heart, effective tissue repair after myocardial infarction requires a robust angiogenic response under the interaction of immune cells and endothelial cells [1-3] .

The formation of new blood vessels reduces scarring and delays the deterioration of heart function, which may be one of the targets of treatment.

However, the complex intercellular interactions between angiogenesis and cardiac functional adaptation after myocardial infarction have so far been unclear.

To this end, the research group of Kai C. Wollert of the Hannover Medical School in Germany published a paper in Science entitled Meteorin-like promotes heart repair through endothelial KIT receptor tyrosine kinase .

Through bioinformatic secretomic analysis of mouse models of acute myocardial infarction, it was found that Meteorin -like promotes heart repair through endothelial KIT receptor tyrosine kinase.

METRNL protein was found to be highly expressed in myeloid cells in the myocardial infarction area.

Research on METRNL mainly found that it is secreted during inflammation and promotes metabolic adaptation and tissue protection under stress conditions, but the receptors of METRNL and the roles of both in myocardial infarction repair are still unknown.

In addition to mouse models, the authors further found that METRNL was also abundantly expressed in myocardial samples from patients with acute myocardial infarction.

By co-labeling the myeloid cell marker CD11b, the authors confirmed that METRNL is expressed in myeloid cells in the infarcted area (Figure 1) .

Metrnl-/- itself can reproduce normally without obvious phenotype. However, after myocardial infarction injury, compared with wild-type mice, they showed a larger infarct scar area, and left ventricular dilatation and systolic dysfunction were more pronounced.

In addition, the authors found that Metrnl-/- deletion did not affect global myocardial capillary density, but impaired neocapillary formation in the border region of myocardial infarction in mice.

In addition, the authors found that angiogenesis defects after myocardial infarction were rescued by transplanting myeloid cells from wild-type mice into Metrnl-null mice.

The authors then found the cell surface receptor KIT of METRNL by chemical cross-linking mass spectrometry.

KIT is a receptor for the stem cell factor SCF in hematopoietic stem/histomic cells and germ cells and other cell types, and is very important for hematopoiesis and developmental processes [4] .

Through co-immunoprecipitation experiments, the authors demonstrated a direct interaction between METRNL and KIT, and found that METRNL interacts with the extracellular domain of KIT with high affinity.

The authors found that in a mouse model of myocardial infarction, the number of kit-expressing epithelial cells was significantly increased, and genes related to cell proliferation and migration were highly expressed (Figure 2) . 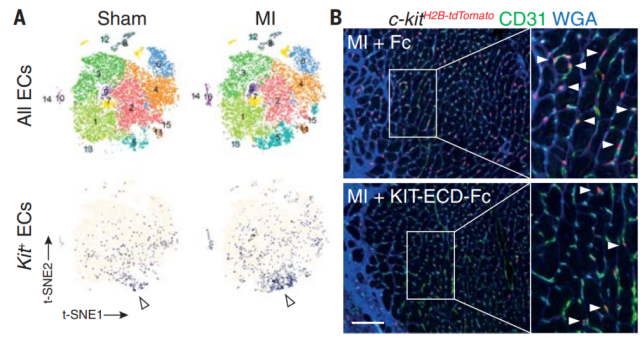 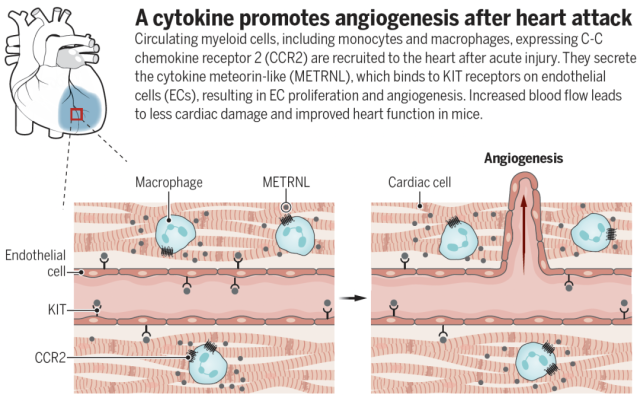 Due to the therapeutic effect of this work on acute myocardial infarction, the same journal published an opinion article to introduce the work.

The work found that providing METRNL protein to mice can increase angiogenesis and improve cardiac function after acute myocardial infarction in mice. It is a “cross-talk” at the cellular biological level during cardiac repair.