Scientists have found that one replacement of aging blood is enough to cause cell and tissue aging in young animals, and anti-aging drugs can remove the toxicity of aging blood.

For a long time, our scientists have been looking for ways to deal with aging, not really wanting to immortalize human beings, but to find ways to delay aging, so that humans can die in relative health and dignity.

Just recently, professors Irina Conboy and Michael J. Conboy from the University of California, Berkeley, published their research results in Nature Metabolism. They found that a single blood exchange, aging blood, was sufficient to cause cellular and tissue senescence in young animals . Before blood replacement, using senolytics to remove senescent cells in aged mice can reduce the effect of senescence caused by senescence [1].

As early as 2005, Professor Irina Conboy, who was a postdoctoral fellow at Stanford University at the time, let old mice and young mice “share” blood circulation, organs and internal environment through “xenobiotic symbiosis”, confirming that young blood can make aging mice “rejuvenate”. “[2]. 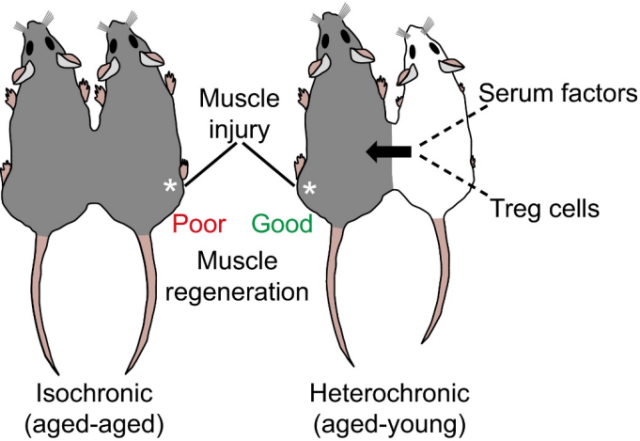 On the basis of their research results, many scientists have joined the research team of “exchange blood and anti-aging”, but the results are a bit dramatic.

For example, in 2013, some researchers found that young blood can reduce myocardial hypertrophy in old mice through the “heterobiosis” of young mice and old mice, while in 2014, some researchers directly injected plasma from young mice When injected into aging mice, the lifespan of the mice was shortened instead of being extended.

The matter of “exchange blood and anti-aging” is a bit confusing.

They found that the effect of young blood in reversing aging is actually very limited. Not only was the aging of old mice not reversed, but old blood also caused premature aging in young mice [4].

Is there a possibility that the effect of “exchange transfusion anti-aging” may be that the young blood dilutes the “toxin” in the blood of the aging mice?

Following this line of thought, in 2020, Professor Conboy started the “dilution method” again, replacing half of the plasma of the aged mice with normal saline containing 5% albumin. As a result, the aged mice are really “younger” and have the ability to repair muscles. Max, the degree of liver fibrosis was also reduced [5].

In this study, Professor Conboy’s team turned back to the “blood replacement mode”, only sharing the blood of young and old mice to clarify the specific mechanism of aging through blood.

With age, senescent cells (SnCs) will continue to accumulate. The main feature of SnCs is permanent growth arrest, and will release inflammatory cytokines and growth factors, showing a senescence-associated secretory phenotype (SASP). SnCs can pass SASP . Induces senescence responses in cells without senescence [6].

In this way, it becomes possible for SnCs of aged animals to transfer aging to younger animals without physiological aging.

This time, the researchers first verified at the cellular level, using the serum of young or old mice or the plasma of young or old to culture primary human and mouse cells without senescence.

It is worth mentioning that, in the mouse experiments, they used the skin fibroblasts (MDFs) of the self-developed p16-3MR mice, which will self-luminesce once they become senescent.

Now that cells are senescent, there may be changes in SASP.

Indeed, the plasma levels of many SASP factors (IL-1α, IL-6, CCL5, TNF-α, etc.) were significantly increased in aged mice, and SASP in skeletal muscle, kidney, and liver of YO mice was significantly higher than that of YY mice. The factor levels are also much higher.

It really is watching young mice grow old in an instant!

They performed another blood exchange, exchanging blood from aged mice treated with the senolytics dasatinib and quercetin (DQ), which clear senescent cells, with young mice (YO+DQ).

As expected, DQ inhibited the transfer of the aging phenotype in older mice to younger mice .

Compared with YO mice, the levels of SASP factor and SA-β-gal in skeletal muscle, liver and kidney of YO+DQ mice were significantly reduced, and the structural and functional impairment of liver and kidney were alleviated . 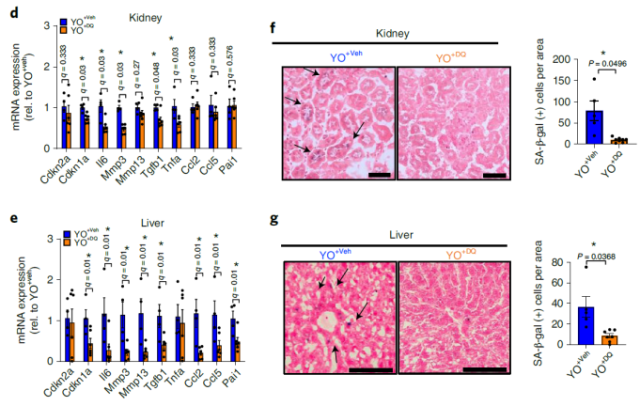 After all, the strength of the demonstration of a senolytics drug combination is limited, so Professor Conboy’s team used another senolytics drug ABT263 (navitoclax) to conduct experiments.

However, after all, ABT263 is another senolytics drug, and the therapeutic effect is also different. For example, some aging markers in the blood of (YO+ABT) mice did not decrease, and the loss of muscle strength was not reversed.

But all in all, before blood replacement, using senolytics to eliminate SnCs, the ability of elderly blood to cause decline will be weakened.

So which cells are getting old in this wave of exchange transfusion?

All in all, Prof. Conboy’s team once again confirmed the “aging blood-induced aging” model of aging, and the removal of senescent cells (SnCs) in aged animals attenuated this metastatic aging.

Since aging is a response to damage triggered by multiple factors, including the aging-associated secretory phenotype (SASP), reducing or removing these factors may represent a new strategy for extending healthy lifespan in humans.

Maybe one day, “eternal youth” will become a reality?