In this colorful world, there is a group of people who unfortunately lost the ability to distinguish colors. They are colorblind patients.

Achromatopsia ( ACHM )is a severe recessive inherited retinal disease in which the inability to distinguish between colors or a color in the natural spectrum makes the world appear gray to them, and in high light levels(externalNormal visual function cannot be obtained undersunlight).

The function of cones (photoreceptors)color blindness isusually destroyed at birth, so their vision depends mainly on rods (another type of photoreceptors). Since rod cells are distributed in the peripheral retina, their main function is to perceive low light.

Colorblind-related studies have shown that mutations in the gene CNGA3 or CNGB3 are most common in colorblind patients.

Although their cone density had been significantly reduced, all of the patients studied had residual cone cells and, as such, these cells could serve as therapeutic targets to rescue visual function.

Previous successful gene-replacement therapies in non-primate models of color blindness have held promise for clinical treatments, but whether these therapies can induce new cone cell functions in the human brain has not been determined .

On August 24, 2022, a research team led by Dr Tessa Dekker , Associate Professor of the Institute of Ophthalmology at University College London (UCL) , published a research paper entitled: A demonstration of cone function plasticity after gene therapy in achromatopsia in Brain , the top journal in the field of clinical neurology. Research Papers.

The academic-led study , conducted concurrently with a Phase 1/2 clinical trial in children with achromatopsia , is the first to investigate the effect of gene therapy on cone cell function in children with color blindness and confirms that the therapy is effective in activating retinal and A previously dormant signaling pathway between the brains has restored cone function in some children born with complete color blindness .

The findings suggest that using gene therapy to activate or enhance the plasticity inherent in the developing brain holds the promise of bringing a world of color to colorblind children.

The new study involved four children aged 10 to 15 with hereditary colour blindness who participated in two clinical trials led by UCL and Moorfields Eye Hospital. Genetic testing of 4 patients before and after subretinal gene therapy with an adeno-associated virus (AAV) vector expressing CNGA3 or CNGB3 confirmed CNGA3 mutation in 3 patients and CNGB3 mutation in one patient.

All four patients received gene therapy in only one eye to allow doctors and researchers to compare the effects of treatment with no treatment.

Two trials targeted a different gene (CNGA3 or CNGB3) . The main purpose of the trial is to test the safety of the gene therapy and whether it can improve vision.

As trials are ongoing, the overall effectiveness of gene therapy remains to be determined.

In the study, the researchers introduced a new functional magnetic resonance imaging (fMRI) method that separates the cone-shaped signal that occurs after a patient’s treatment from the existing rod-driven signal.

Unlike previous studies on gene therapy for color blindness, this new approach allows researchers to direct any changes in visual function following treatment to the target cone photoreceptor system.

Specifically, they used a “silent replacement” technique to independently manipulate rods and cones, and then used the resulting signals to selectively stimulate cones and rods, testing for the first time whether gene therapy could induce a to the new cone signals generated by the visual cortex, and to test whether all the newly observed cone signals actually improve visual function.

The researchers used the method to test four color-blind children and tested the effects of gene therapy on these children in the same conditions as nine other untreated color-blind patients and 28 normal-vision control participants.

fMRI showed that two of the four treated colorblind patients showed treatment-induced improvements in cone function after 6-14 months of treatment .

Before treatment, the two patients showed no cone cell function on all tests, and after treatment, their measurements were remarkably similar to those of a sighted control group. 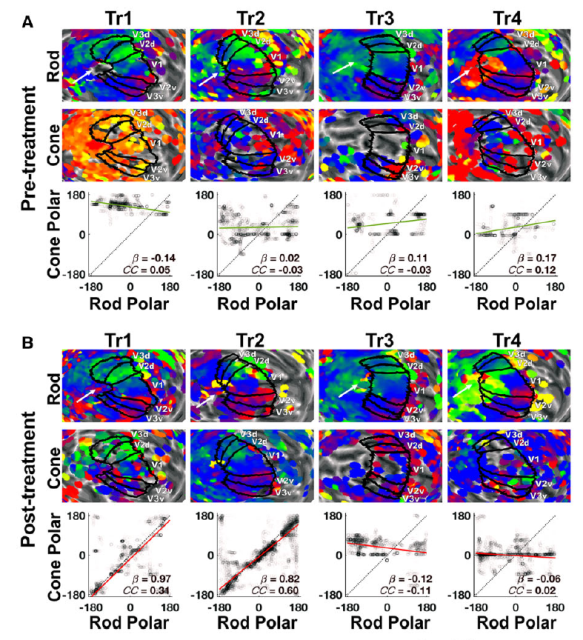 Tessa Dekker , Ph.D., corresponding author of the study , said the study is the first direct confirmation of widespread speculation that gene therapy in children and adolescents can successfully activate the photoreceptor pathway in long-dormant cone cells and evoke the Unexperienced visual cues.

Four patients also completed a psychophysical test of cone function, which assesses the eye’s ability to distinguish between different levels of contrast.

The test results showed that, in the same two patients , the treated eyes differed in vision supported by cone cell function. 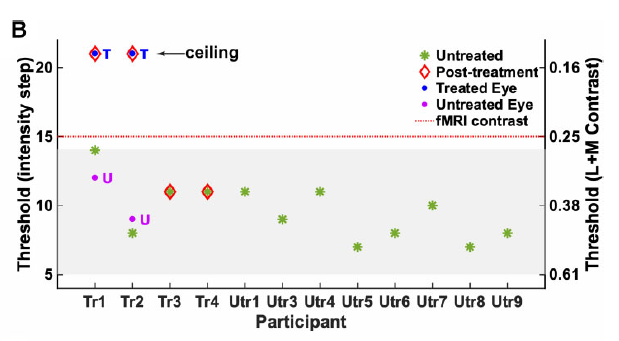 In addition, the researchers said they were unable to determine whether the gene therapy did not work in the other two patients, or if the test used did not detect the treatment effect, or if the effect was delayed.

Currently, the team is also analyzing the results of two clinical trials to determine whether gene therapy is effective in improving everyday vision in people with color blindness.

” We believe that incorporating the new test into future clinical trials could accelerate progress in gene therapy for a range of eye diseases, while also providing new insights into when and why these therapies are most effective ,” said Dr. Tessa Dekker .