AAV gene therapy restores night vision in amaurosis patients who have been blind for decades.

Eyes are the windows to the soul, but unfortunately, not everyone can have a pair of bright pupils.

In the vision of blind patients, the world is not colorful, black or nothingness is all they see.

Therefore, the loss of vision is a very bad and terrible thing for people. It not only brings a lot of inconvenience to the blind people in life, but also severely affects the spiritual beliefs of the blind people.

Many congenital blindness and progressive blindness are related to gene mutation. In recent years, with the maturity of gene therapy technology, more and more researches try to treat blindness through gene therapy.

Leber Congenital Amaurosis (LCA) is the earliest and most serious hereditary retinopathy and one of the most common congenital blindness diseases, affecting about 1 in every 40,000 newborns.

The gradual loss of binocular visual function at the time of birth or within one year of birth, resulting in congenital blindness in infants and young children.

Recently, researchers from the University of Pennsylvania published a research paper titled: Night vision restored in days after decades of congenital blindness in Cell sub-journal iScience .

In this study, two patients who had been blind in childhood due to hereditary amaurosis , 20 to 30 years after being blind, received experimental AAV gene therapy, in just a few days, at night. Vision has been amazingly restored .

The two patients had congenital amaurosis due to a mutation in the GUCY2D gene , and they had complete loss of night vision before treatment.

One eye of the patient received an injection of an AAV viral vector carrying the correct version of the GUCY2D gene , and after a few days of treatment, the patient’s treated eye showed a dramatic increase in night vision, approaching normal night vision.

For example, in December 2017, the FDA approved Spark ‘s AAV gene therapy , which delivers the correct RPE65 gene to retinal cells through an AAV viral vector for the treatment of congenital amaurosis type 2, which sells for up to $ 850,000/year .

Up to 20% of people with amaurosis congenita are due to mutations in the GUCY2D gene, which encodes a key protein required for the “phototransduction cascade” in retinal photoreceptor cells, which converts light to light.

The process of converting signals into neuronal signals. Previous studies have shown that patients with amaurosis congenitalia caused by mutations in the GUCY2D gene often have some surviving photoreceptor cells, especially in areas rich in rod cells (responsible for night vision) , suggesting that if GUCY2D is present, case, rod phototransduction can work again.

In this study, the research team administered high-dose AAV gene therapy to two patients with amaurosis congenital disorder caused by mutations in the GUCY2D gene.

The two patients, a 19-year-old man and a 32-year-old woman, suffered severe vision impairment as children.

Now, when the light is strong during the day, their vision is severely deficient, and at night, they are effectively blind, and their sensitivity to light is less than 1/10,000 that of a normal person.

The research team treated only one eye of the patients and used the other untreated eye as a control to measure the effect of the treatment. Post-treatment tests showed that, in two patients, the treated eyes were thousands of times more sensitive to light in low-light conditions, essentially correcting the initial deficit in night vision.

These tests include a room-navigation ability test in low-light conditions and a test of the pupil’s involuntary response to light. Tests continue to show significant improvements in rod-based low-light vision, and patients’ daily lives have also improved, such as they can now identify objects and people in the dark. 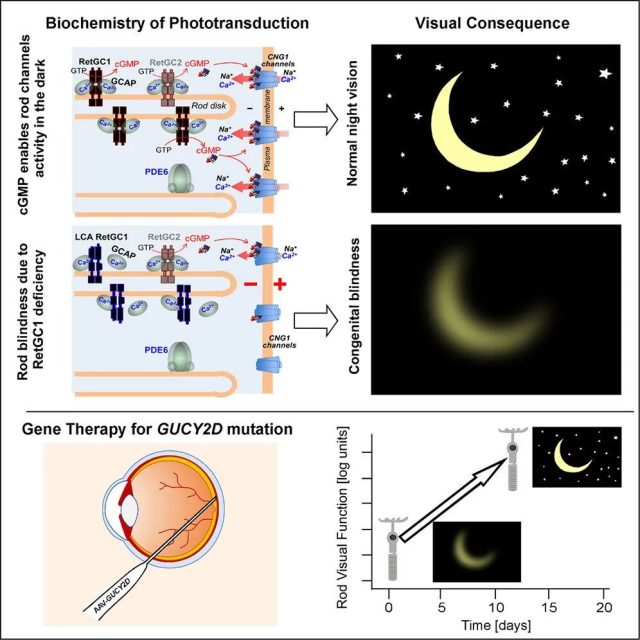 In addition, the improvement effect of this gene therapy was surprisingly rapid, with two patients showing an observable therapeutic effect after only 8 days of treatment.

The study also underscores the interesting fact that in some patients with severe congenital vision loss, the retinal cell network that regulates vision remains largely active and intact, requiring only an additional complement of missing protein, it allows the retinal network to start working again, improving vision.

” These exciting results show that the basic molecular mechanisms of phototransduction remain largely intact in some individuals with amaurosis, so even after a few days of blindness ,” said study leader Samuel G. Jacobson , professor of ophthalmology at the University of Pennsylvania. Gene therapy and vision improvement can still be received 10 years later.