Gout patients are getting younger and younger, how to prevent high uric acid? 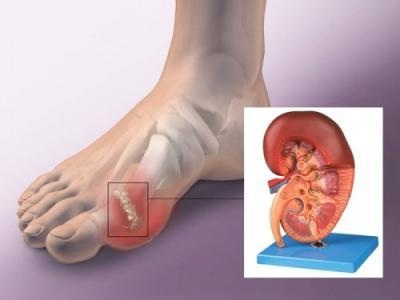 Hyperuricemia, the name sounds a little unfamiliar, but in our country, its number has exceeded diabetes, reaching 120 million people, and the incidence rate is more than ten times that of 20 years ago. After the “three highs” of high blood sugar, high blood pressure, and high blood lipids, the “fourth highest” high uric acid has become one of the most common diseases that endanger people’s health. The middle-aged and elderly people no longer have patents, and the trend of diseases is becoming younger .

Many people mistakenly equate high uric acid with gout. In fact, only 10% of patients with high uric acid have typical gout symptoms, and more patients ignore early intervention because they have no obvious discomfort.

Similar to the other three highs, the hazards of high uric acid are very hidden. In addition to causing gout, there are many chronic complications.

If the blood uric acid content is too high and exceeds its own solubility, fine uric acid deposits will be formed in the joint cavity, triggering acute inflammation and causing severe joint pain. If long-term high uric acid cannot be effectively relieved, the pain will be more frequent, more joints will be involved, and even joint stiffness and deformity will be caused.

Kidney is another disease that is deeply affected by high uric acid. Urine crystals are often deposited in the kidneys and urinary system, causing various acute and chronic kidney diseases. The common clinical manifestations are nocturia, proteinuria, and hematuria. In severe cases, renal insufficiency and uremia may occur.

The high uric acid state in the blood can stimulate the blood vessel wall for a long time and promote plaque formation. Therefore, hyperuricemia has become an important cause of angina, myocardial infarction, stroke and other diseases.

Hyperuricemia can greatly reduce the body’s ability to use glucose, affect the normal function of insulin, and cause blood sugar to rise. For diabetic patients, the combined hyperuricemia is even worse, which can significantly increase the incidence of various diabetes complications.

Most people drink 8 glasses of water a day. If the blood uric acid is high, it is better to drink 10 glasses. Don’t eat high-purine animal foods, such as offal, seafood, etc. (For example, plant foods containing purines such as spinach and soybeans can be eaten appropriately)