After adjusting for multiple covariates, the researchers compared the prevalence of brown fat and cardiovascular and metabolic diseases, and found that compared with patients without BAT, patients with BAT had T2DM and dyslipidemia. The rates are significantly lower.

As we all know, obesity is the main factor leading to metabolic and cardiovascular diseases. In addition to white fat that can cause obesity by storing calories in the human body, there is another magical brown fat (BAT), which contributes to the increase in calorie consumption and systemic glucose and lipid utilization, so it is considered to treat obesity And potential targets for metabolic diseases.

However, brown fat will become less and less with age, and only a small amount is stored around the neck and shoulders of some adults. Therefore, it is not yet possible to study on a large scale whether brown fat is beneficial to human cardiovascular metabolism and obesity-related diseases. Treatment.

Recently, researchers from Rockefeller University in the United States published a study titled Brown adipose tissue is associated with cardiometabolic health in Nature Medicine. In this large-scale study of more than 52,000 participants, it is clear that BAT is promoting It has a potential role in cardiovascular and cerebrovascular metabolic health, and individuals with BAT have a significantly lower risk of cardiovascular disease and type 2 diabetes. 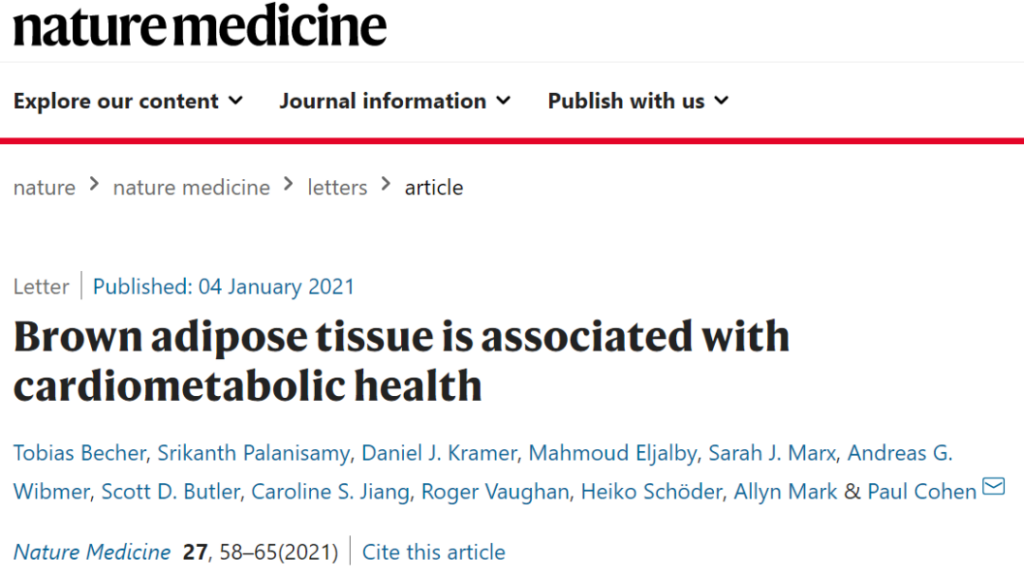 The analysis data of this study is derived from a total of 134,529 18F-FDG positron emission tomography (PET/CT) reports of 52,487 patients who went to Memorial Sloan Kettering Cancer Center (MSKCC) for treatment between 2009 and 2018 .

Researchers first evaluated the correlation between BAT and age, outdoor temperature and BMI during the month of 18F-FDG PET/CT index scan, and found that BAT is more common in women, and decreases with age. The higher the temperature and BMI, the lower the BAT content.

Subsequently, the researchers used a multivariate logistic regression model adjusted for age, gender, BMI, outdoor temperature, etc., to analyze whether taking antihypertensive drugs and statins would reduce the content and activity of BAT, and found that β-blockers and statins There is a significant negative correlation between the use of drug-like drugs and the content and activity of BAT.

After adjusting for multiple covariates, the researchers compared the prevalence of brown fat and cardiovascular and metabolic diseases, and found that compared with patients without BAT, patients with BAT had T2DM and dyslipidemia. The rates are significantly lower, only 4.6% and 18.9%. In addition, patients with BAT include atrial fibrillation (2.8% VS 3.6%), CAD (3.1% VS 4.9%), CVD (2.1% VS 2.8%), The prevalence of cardiovascular diseases including CHF (1.0% VS 2.0%) and hypertension (26.7% VS 30.7%) is relatively lower. 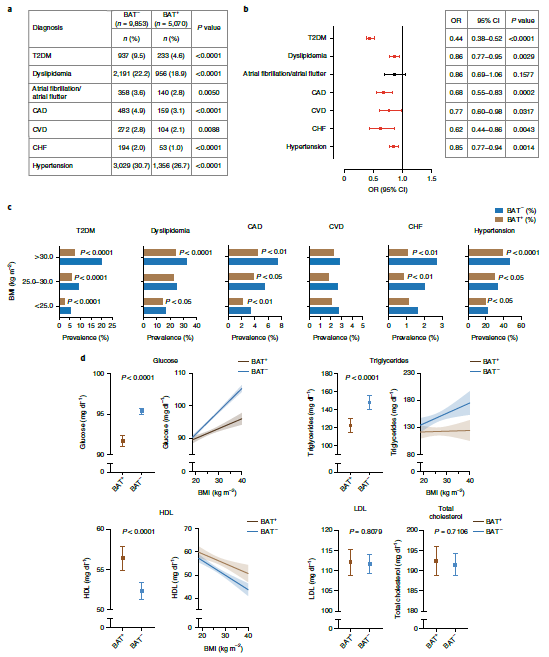 The link between brown fat and cardiovascular and metabolic diseases

The researchers also stratified the data through BMI to determine whether overweight and obese patients also have this association between BAT and improved cardiovascular and metabolic health.
The results found that with the increase of BMI, the prevalence of cardiovascular and metabolic diseases gradually increased, but this effect was significantly slowed down in individuals with BAT, especially in the prevalence of T2DM, CAD and CHF .

In addition, the changes in blood glucose and triglycerides associated with elevated BMI were also offset in BAT-containing individuals, and BAT individuals in the same BMI category also had higher HDL levels.

Paul Cohen, the corresponding author of the study, said: “We plan to further study the biological properties of brown fat, looking for genetic variants that can explain why some people have more brown fat than others, and solve what I should do to get more. The problem of brown fat is also the first step in the development of pharmacological methods to stimulate brown fat to treat obesity and related diseases.”