Diabetes: Gastrointestinal discomfort after taking metformin?  Metformin has been used clinically for more than 60 years. It is currently one of the most widely used oral hypoglycemic drugs in the world and the core drug for the prevention and control of diabetes in the world [1]. The 2020 American Diabetes Association (ADA) guidelines recommend it as the first-line medication throughout the entire treatment.

However, as the “first brother” of hypoglycemic drugs, metformin also has its own “worries”.

It is clinically found that about 20%～30% of patients have gastrointestinal discomfort after taking metformin, which mainly manifests as nausea, diarrhea, vomiting, abdominal distension and abdominal pain.

Most of these adverse reactions occur at the beginning of treatment, and most patients can usually relieve themselves; but for people who originally suffered from gastrointestinal diseases, this is undoubtedly a big trouble, and some patients with severe symptoms, even because of this Give up metformin.

Why is there such a problem?

Metformin is highly water-soluble. After it enters the gastrointestinal tract, it will be dissolved and released quickly. As a result, the gastrointestinal mucosa is stimulated by a large number of drugs in a short time, and it is prone to discomfort such as nausea, vomiting, and diarrhea.

Metformin can promote intestinal glucose uptake and lactic acid production, increase the concentration of glucagon-like peptide-1 (GLP-1) and bile acid in the intestine, resulting in changes in the intestinal flora and its living environment. [4]

Once the intestinal microecology changes, it will directly affect the intestinal digestion, absorption, metabolism and other functions, and may also trigger intestinal inflammatory reactions.

So, for Patients who need to take metformin, is there any way to reduce these side effects?

According to the recommendations of the Expert Consensus on the Clinical Application of Metformin (2018 Edition), the following two methods can help reduce metformin-related gastrointestinal reactions:

Start with a small dose, gradually increase the dose, adjust the dose at the right time, and take non-sustained-release preparations in divided doses with meals

In order to avoid adverse reactions, the use of metformin should follow the principle of “start with a small dose and gradually increase the dose” . These two medication plans are for reference:

After 1 to 2 weeks, increase the dose to the optimal effective dose of 2000 mg/day or the maximum tolerated dose.

If there is no obvious gastrointestinal adverse reaction, it can be gradually increased to 1000 mg twice a day.

Note: The treatment can be individualized according to the patient’s condition, usually at a daily dose of 1500~2000mg (non-sustained-release preparations should be taken in 2~3 times, taking it with or after a meal can help reduce gastrointestinal reactions).

Metformin sustained-release tablet is a kind of pharmaceutical preparation prepared through sustained and controlled-release technology, which can be said to be an “upgraded version” of ordinary tablets. Its main feature is that the drug can be slowly dissolved and released in the stomach through drug slow-release technology.

The above-listed “Family Standing Drug Brand” Gwazhi XR (metformin hydrochloride sustained-release tablets) is an example. It is of German quality and is the reference agent for the consistency evaluation of metformin sustained-release tablets generic drugs, that is, other generic drugs should use it As a comparison standard, it uses a special GSD dual-phase slow-release technology :

The external phase is a gel skeleton structure, which swells when exposed to water, prolonging the residence time of the drug in the stomach

The internal phase is a membrane structure, wrapped with metformin, slowly released, reducing gastrointestinal irritation and prolonging the absorption time. 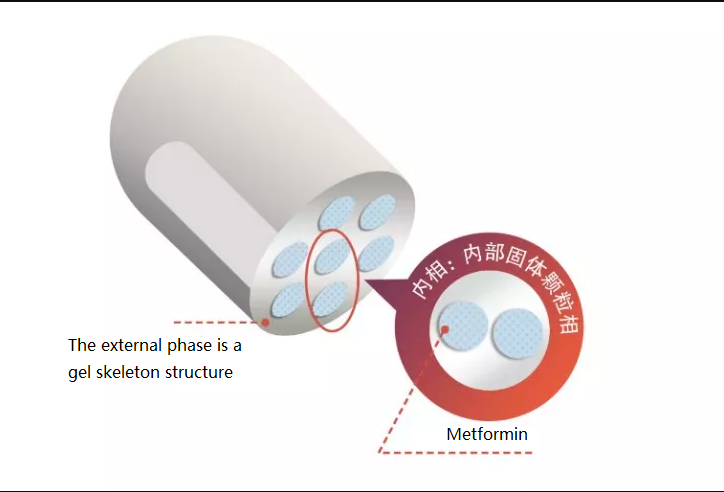 Due to the slow down of the drug release rate, the sustained-release tablets can reduce the irritation of the gastrointestinal tract and the incidence of adverse gastrointestinal reactions while effectively reducing blood sugar.

Studies have compared the gastrointestinal tolerance of metformin sustained-release tablets and ordinary tablets. The results showed that compared with the initial use of ordinary tablets, the incidence of gastrointestinal adverse events in the initial sustained-release tablets group was reduced by 50%, and the incidence of diarrhea was reduced by 75%. [5]

Therefore, when diabetic patients take metformin ordinary tablets, if gastrointestinal adverse reactions occur repeatedly, it is recommended to switch to metformin sustained-release tablets, which can be taken with meals to reduce gastrointestinal discomfort.

Keep in mind  for following:

Some patients have gastrointestinal discomfort after taking metformin, and stop the medication by themselves, which is not advisable. Because metformin is the basic medication for type 2 diabetes, it has an irreplaceable effect. Once the medication is stopped arbitrarily, it may cause blood sugar fluctuations, and secondly, it will not be able to “enjoy” the benefits of weight control and overall metabolic improvement; in addition, if you are in contact with When other hypoglycemic drugs are used in combination, the synergistic effect of hypoglycemia can not be obtained after stopping metformin.

Therefore, even if the condition improves after using the medicine, the medicine should not be stopped without authorization. If there are no contraindications, metformin should always be kept in the diabetes treatment plan. [6]

3 Don’t miss or forget to serve

Ordinary metformin tablets have a faster release rate and a short action time. To control blood sugar throughout the day, you need to take it multiple times a day. Remember not to miss or forget to take it.

However, for patients who are busy at work or easily forget to take medication, taking medication multiple times a day is indeed inconvenient. For such patients, it is more appropriate to choose metformin sustained-release tablets, which can reduce gastrointestinal adverse reactions and increase the convenience of taking medication.

Sustained-release tablets release slowly, it takes more than 10 hours to release 90%, and the action time is long. [7] It only needs to be taken once a day to achieve slow release and stable hypoglycemic effect.