Is myopia related to the occurrence and development of diabetic retinopathy?

Is myopia related to the occurrence and development of diabetic retinopathy? The study proved that a longer axial length can reduce the risk of DR, regardless of refraction or other biological parameters of the eye.

Combined with the results of some previous studies, it is shown that the elongated eyeball plays a vital role in the protective relationship of refractive error to DR.

Diabetic retinopathy (DR) is a serious microvascular complication of diabetes. If left untreated, it may cause massive and irreversible loss of peripheral and central vision. A large number of studies have focused on the risk and protective factors of DR. Among them, refractive error (RE) is one of the protective factors of DR. It is theoretically believed that the increased eye axis can reduce the metabolism and blood supply of the eyeball. .

However, most studies to date have failed to clarify the above causal relationship, and fewer studies have attempted to clarify the axis of the eye (such as axial length [AL] and anterior chamber depth [anterior chamber depth, ACD]) and refractive The relationship of elements (such as corneal curvature [CC]) in RE-DR. However, a deep understanding of these underlying mechanisms is very important for exploring new therapies for DR.

Recently, a study published in the American Journal of Ophthalmology, a journal of Elsevier, discussed the above issues in depth.

The Singapore Malay Eye Study (SiMES-1 and -2) and the Singapore Indian Eye Study (SINDI-1 and 2) are based on a cohort study of 40-80-year-old Malays and Indians living in Singapore. The initial inspections were completed between 2004-2006 and 2007-2009, and follow-up inspections were completed successively between 2011-2013 and 2013-2015. A total of 840 diabetic subjects were included in the study, and the initial and follow-up study parameters were recorded, including graded fundus images, refractive power, and ocular biological parameters (AL, ACD, and CC); all subjects had no cataracts or refraction History of surgery.

* The commonly used criterion is progression of ≥2 grades, but in this study, the number of patients with progression grade ≥2 was very small (n=19). 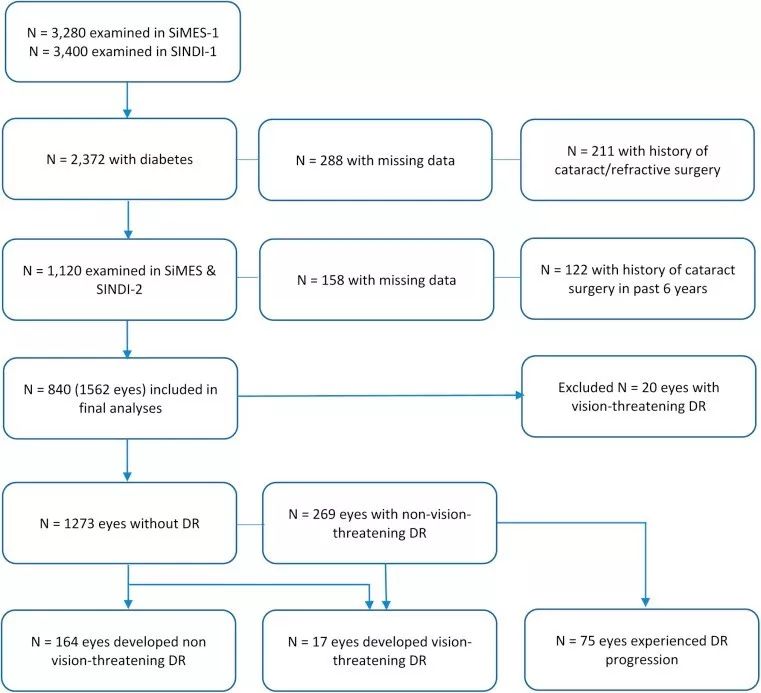 Compared with subjects without DR, subjects with DR are younger, have higher BMI and HbA1c, are more likely to use insulin and myopia, and have a shorter initial axial length. In the model adjusted for age and gender, longer axial length and lower SE (Spherical equivalent) are associated with lower risk of DR. After multivariate adjustment, the significant correlation between eye axis length and DR still exists, but the correlation between SE and DR disappears.

The study proved that a longer axial length can reduce the risk of DR, regardless of refraction or other biological parameters of the eye. Combined with the results of some previous studies, it is shown that the elongated eyeball plays a vital role in the protective relationship of refractive error to DR.

According to the current treatment methods and levels, the early treatment of diabetic retinopathy has a better effect. Due to the irreversibility of lesion damage, prevention is the most important part, and the cost of early prevention is much lower than the cost of late surgical treatment, and the effect is better. It is clinically recommended for patients with diabetes to have mydriatic examination of the fundus regularly, especially for patients with a long course of disease.