Reasons for rapid deterioration of diabetic feet. Diabetic feet are a common complication, but I don’t know that many patients develop very fast.

Diabetic feet are a common complication, but I don’t know that many patients develop very fast. For example, a patient who was admitted to the Diabetic Podiatry Department of our hospital had a toe gangrene at first, but the whole foot was infected in a day or two. Why is this happening? In addition to incorrect treatment, the main reason is lower limb ischemia. 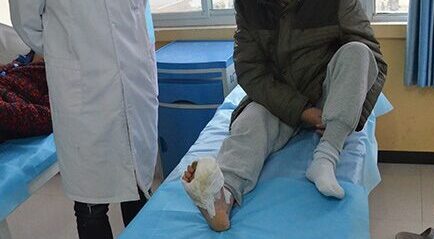 Diabetes has many effects on the body. One of them is that it easily leads to stenosis or even occlusion of the arteries of the lower extremities, which can lead to more severe ischemia. The muscle tissues will be damaged due to prolonged ischemia, and the lower extremities will appear for unknown reasons. Injury, the wound is difficult to heal, and more tissues are ulcerated, so it develops quickly.

How to treat this condition? One aspect is to improve the blood supply to the lower limbs. Generally, in peripheral vascular surgery or interventional departments, balloon expansion or stents are often used to dredge blood vessels, but the effect is often not good. This is because the vascular occlusion of many diabetic feet is diffuse, with many occluded sections and small blood vessel occlusion, which is difficult to completely unblock.

There is a consensus in the industry that diabetic foot undergoes vascular intervention, and the situation of re-occlusion cannot be avoided, which is also one of the characteristics that hinder diabetic foot. Some patients became occluded again within a month or two, and the degree of ischemia was even worse than before, and the wound became more infected, which would undoubtedly increase the overall difficulty of treatment.

How to do? In our Diabetic Foot Treatment Specialist, we mainly use integrated traditional Chinese and western medicine to treat peripheral vascular disease. Instead of performing surgery to make stents, we use methods such as establishing collateral circulation and improving microcirculation to improve the blood function of the lower limbs and increase local blood. Oxygen saturation can increase the supply of nutrition and medicine to the wound surface and promote wound healing.

Another important aspect is the treatment of local wounds. On the basis of improving blood circulation, it is necessary to clean up the inflammatory tissue in time, which can reduce the burden of bacteria and help control infection, and the other is that it is convenient to apply external Chinese medicine ointment on the surface of the wound and directly act on the wound surface for better nutrition Wounds, decaying and muscle growth, improve the comprehensive treatment effect of diabetic foot.

Of course, these are only part of the areas that need treatment, and there are other points that need to be paid attention to, such as blood sugar, blood pressure, cardiovascular and cerebrovascular diseases, etc., which require targeted treatment. These departments that specialize in the treatment of diabetic feet can generally receive systemic treatment, so the wound infection can be controlled more quickly to prevent its continued development. Comprehensive treatment does not require amputation!