Chinese hamster ovary (CHO) cells are the preferred host cells for the production of protein drugs, because CHO cells have the following advantages compared with other systems:

① CHO cells have accurate processing and modification functions on proteins, so the biological activity of the expressed proteins is closer to that of natural proteins;

② CHO cells have relatively strong ability to tolerate shear and osmotic pressure, and the method of adherent culture or suspension culture can be selected according to culture requirements;

③The cells after the integration of foreign genes are stable, and the recombinant genes can be amplified and expressed efficiently;

④ The expressed target protein can be transported from inside the cell to the outside of the cell, and CHO cells only express a small amount of endogenous protein, which is conducive to the extraction of the target protein. Today, more than half of the most popular biologics on the market are produced by CHO cells. For example, adalimumab (Humira), bevacizumab (Avastin) and rituximab (Rituxan).

It can be said that CHO cells have made an indelible contribution to the development of modern biopharmaceutical industry.

But do you know the earliest history of CHO cells? Today, let us briefly sort out the past and present of CHO cells, and understand the story behind CHO cells, which may give us more inspiration and thinking for our future work. 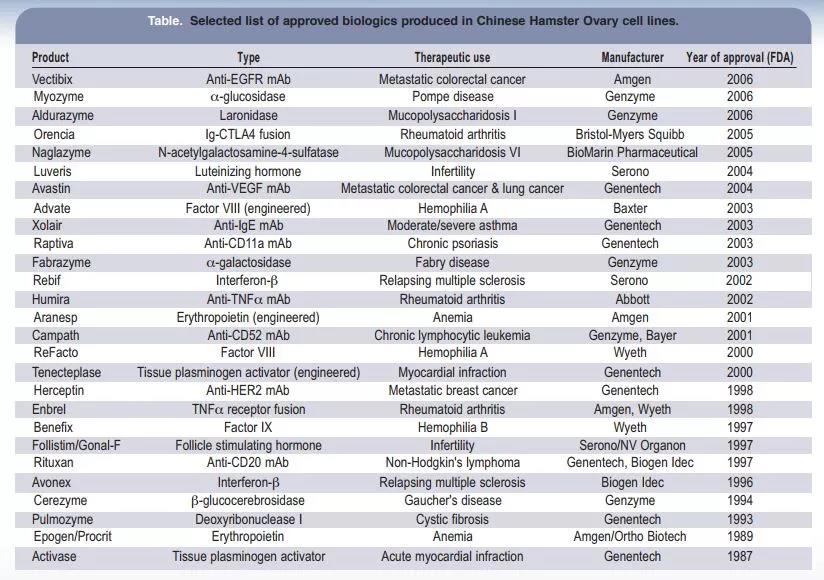 The Chinese hamster (scientific name Cricetulus griseus) belongs to the rodent family from northern China and Mongolia. In 1919, Professor Hu Zhengxiang of Peking Union Medical College (Note: Hu Zhengxiang, born in 1896, famous pathologist. He graduated from Harvard Medical School in 1921, and then studied pathology at Massachusetts General Hospital for 5 years.

After returning to China Served as deputy dean of Peking Union Medical College, professor and head of the Department of Pathology, and made great achievements in pathology research.) The first Chinese ground hamster was used in Beijing to study pneumococcal bacteria.

In December 1948, Dr. Robert Briggs Watson, a physician from the Rockefeller Foundation’s International Health Division, risked his life and brought a box of 20 gifted by Professor Hu Zhengxiang from Beijing to continue research on the raging in Asia The malaria Chinese ground hamster escaped the war zone and drove to Shanghai Airport.

Although the cold raindrops slapped the glass strongly and mudslides could block the road at any time, Watson finally successfully boarded the Pan Am flight and left China and transported the batch of Chinese ground hamsters to Victor Schwentker, an experimental animal expert in New York.

No one thought that many years later, the 20 Chinese ground hamsters that accompanied him would become the key “key” to the contemporary pharmaceutical production industry.

Dr. Theodore T. Puck of the University of Colorado Medical Center and his subordinate colleague Fa-Ten Kao obtained a female Chinese Hamster from the laboratory of Dr. George Yerganian of the Boston Cancer Research Center in 1957 and successfully isolated CHO cells Because of the rapid suspension growth and high protein expression characteristics of this cell, CHO cells have begun to gain widespread application in scientific research and enterprises.

In 1984, Genentech realized the first recombinant Chinese hamster ovary cells to express tissue-type plasminogen activator (t-PA) and was successfully approved for marketing in 1987, marking a landmark event in the production of protein drugs by mammalian cell expression systems .

Subsequently, many foreign protein genes were successively transfected into mammalian cells, and some valuable proteins were continuously expressed, including coagulation factors, erythropoietin (EPO), immunoglobulin, urokinase, hepatitis B surface antigen (HBsAg) And monoclonal antibodies, etc., have greatly promoted the development of the biopharmaceutical industry.

At the same time, with the popularity of CHO cells in the laboratory, scientists have successfully isolated different subtypes of CHO cell lines, such as CHO-S, CHO DXB11, CHO DG44, CHO-M, and GS gene knockouts that have received continuous attention in recent years. 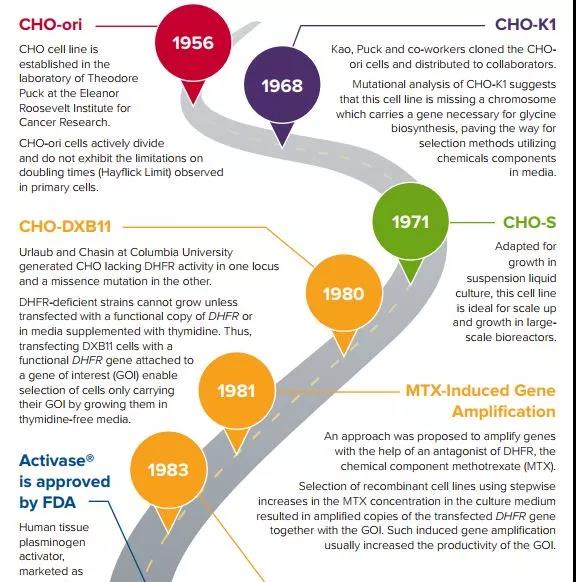 Unfortunately, due to the special historical background at the time, Robert Watson was later accused by the China Germ Warfare Committee as a war criminal, which indirectly led to the imprisonment of Professor Hu Zhengxiang of the Peking Union Medical College.

Professor Hu was later regarded as a “reactionary academic authority.” Being criticized and persecuted, Hu Zhengxiang and his wife committed suicide at home in 1966.

Now in the age of peace, looking back on the past, we cherish the memory of the older generation of scientists who have made great contributions to the cause of human health, and cherish the hard-won things even more.

On the other hand, with the popularization of CHO cell applications, the CHO cell culture medium industry has also been fully researched and rapidly developed.

In addition to supplying nutrients to the cells, the serum also provides growth factors that are necessary for cell proliferation.

However, the use of serum has large differences between batches, is easily contaminated by mycoplasma and viruses, has many disadvantages such as high cost, does not use product separation and purification, and affects cell growth and the quality of the final product. It is not suitable for large-scale industrial production.

So scientists have been researching and developing industrial serum-free media since 70 years.

The development of serum-free medium greatly improves the convenience and reproducibility of the CHO cell culture process and reduces the pressure on product purification.

Therefore, the current and future trend of serum-free medium is to use animal-free, chemical-determined formulas for biopharmaceutical production.

At the same time, different suppliers are also working hard to improve the technical capabilities of medium R&D and production.

Based on different cell culture applications, they are constantly updating and upgrading the formula and configuration methods of medium. For example, Thermo Fisher/Gibco uses the patented AGT technology to make the configuration process of dry powder medium convenient and simple.

Merck/SAFC announced last year that it had launched the first commercial culture medium for perfusion process to meet the challenges of perfusion culture process.

The American company Irvine Scientific also launched a new GMP-ready CHO cell perfusion medium and The high-efficiency and concentrated feed BalanCD CHO Feed 4 used for Fed-batch cultivation, and the feed 4 dry powder configuration process is also simple, adding water to dissolve, no need to adjust the pH, the convenient configuration scheme is very attractive to the large-scale production of the biopharmaceutical industry .

Because the metabolic requirements of different cell lines are not exactly the same, it is difficult to develop a “universal” CHO cell culture medium that can meet the needs of all cell applications. At the same time, for the consideration of cost, process and risk control in the large-scale production stage, many The company will still choose to develop personalized customized culture media after the project has progressed to a certain level.

In the future, the large-scale production technology of media-whether the quality and batch stability of large-scale media dry powder can be guaranteed, will also become the culture company’s One of the core competitiveness.

In short, the emergence of CHO cells has injected infinite vitality into the entire global biopharmaceutical industry, has produced huge scientific research and economic value, and will always benefit mankind.

At the same time, the use of CHO cell platform to express biopharmaceuticals also faces these challenges and requires academic Work together with the industry to solve the problem from the comprehensive use of scientific and engineering knowledge, such as:

② Some glycosylated expression products are unstable and difficult to purify;

④ Recombinant cell culture is expensive and the level of automation is low. 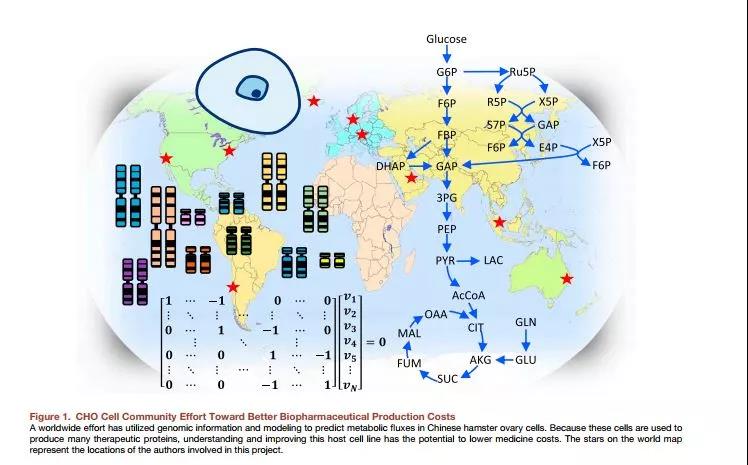