Science: Creates new active proteases that can treat many diseases

Botulinum Toxin, also referred to as botulinum toxin, is a bacterial exotoxin secreted by the deadly botulinum bacterium during the reproduction process. It is a protease. It is the most toxic biological toxin found by humans so far. Its toxicity is equivalent to 10,000 times that of an equivalent amount of potassium cyanide, and 1 mg of purified and crystallized botulinum is enough to kill 200 million mice!

Although Botox looks more like a biochemical weapon, based on its unique neurotoxicity, Botox has a brand new application in the human world. Nowadays, botulinum toxin is not only an important medical nerve anesthetic, but also a cosmetic agent that is popular all over the world-botulinum has a significant effect in eliminating wrinkles. In addition, botulinum toxin is also used to treat chronic migraine, muscle cramps and other diseases.

The current gene editing technology represented by CRISPR is usually used to study and treat chronic genetic diseases such as sickle cell disease caused by gene mutations. CRISPR gene editing achieves the purpose of treatment by correcting the wrong gene.

However, for certain acute diseases, such as neurological damage after a stroke, this is not caused by genetic errors. CRISPR gene editing is difficult to play a role. The protease-based therapy can help enhance the body’s ability to heal nerve damage and the like through protein treatment.

For decades, scientists have been eager to use proteases to treat diseases, but proteases are not widely used in human therapeutic drugs. The main reason for this is the lack of technology that can produce proteases that can cleave designated protein targets.

Recently, Harvard University and the team of David Liu from the Broad Institute of MIT and the team of Dong Min from Harvard Medical School have published a research paper titled: Phage-assisted evolution of botulinum neurotoxin proteases with reprogrammed specificity in Science magazine.

This research uses phage-assisted continuous evolution technology (PACE) to reshape botulinum to effectively cleave a specific substrate, but has no activity on other substrates, which enhances the specificity of botulinum Sex. This can transform botulinum toxin into a protease with new activity for the treatment of various diseases.

More importantly, this method can also allow the enzyme protein to produce unprecedented substrate activity and produce tailor-made specific proteases. This makes it possible to “edit protein composition, which is a development and supplement to editing the genome.”

Although biological molecules will naturally evolve, the entire evolutionary process is extremely long, and the final evolutionary result cannot be controlled. Therefore, for decades, scientists have been using laboratory evolution to produce biomolecules with specific functions, but it still takes a long time and requires technicians to manipulate samples on a regular basis.

In this regard, as early as 10 years ago, Liu Ruqian and his colleagues published a paper on Nature entitled: A system for the continuous directed evolution of biomolecules, and developed a new method of biomolecule evolution-phage assisted continuous evolution. (PACE).

This method combines the laboratory evolution of biomolecules with the life cycle of bacteriophages, allowing proteins to evolve 60 rounds within 24 hours. The efficiency of PACE is about 100 times that of the traditional laboratory evolution method, and the entire experiment process does not require human intervention, which greatly saves the labor cost of the technicians.

In this science research, the research team led by Liu Ruqian developed the PACE positive and negative selection system and used it to reprogram three botulinum light chain proteases-BoNT/X, BoNT/F and BoNT/E, which All have a variety of natural substrate specificities.

It is worth mentioning that botulinum toxin has a very delicate structure design, it contains three structural domains, and each domain has a different function. Among them, the binding domain guides botulinum to the correct cell (the binding receptor on the neuron), the translocation domain assists the protease domain to pass through the cell membrane into the cell, and the light chain protease domain is Botox It is the active area of ​​phosphonin, which cleaves different soluble NSF attachment protein receptors (SNARE) in neurons.

Specifically, the protease domain recognizes the substrate through a wide range of interactions and several external sites (secondary substrate binding sites on botulinum), thereby exhibiting high substrate specificity. The SNARE protein plays a key role in membrane vesicle fusion, and its loss of function will cut off the signal communication between nerves and muscles.

In response, the research team evolved BoNT/X into different variants that can preferentially cleave vesicle-associated membrane protein 4 (VAMP4) and Ykt6; evolved BoNT/F protease into selective cleavage of the non-native substrate protein VAMP7; and combined BoNT The /E protease evolved to cleave the PTEN protein, but it cannot cleave any natural BoNT protease substrate in neurons.

In addition, the evolved botulinum light chain proteases show great changes in specificity-218 to more than 11 million times the change, and can retain their ability to form holotoxins, these toxins can be self-delivered to neurons on.

The first author of the article, Travis R. Blum, said: “These findings establish a multifunctional platform that can reprogram proteases and selectively cleave new therapeutic targets.” 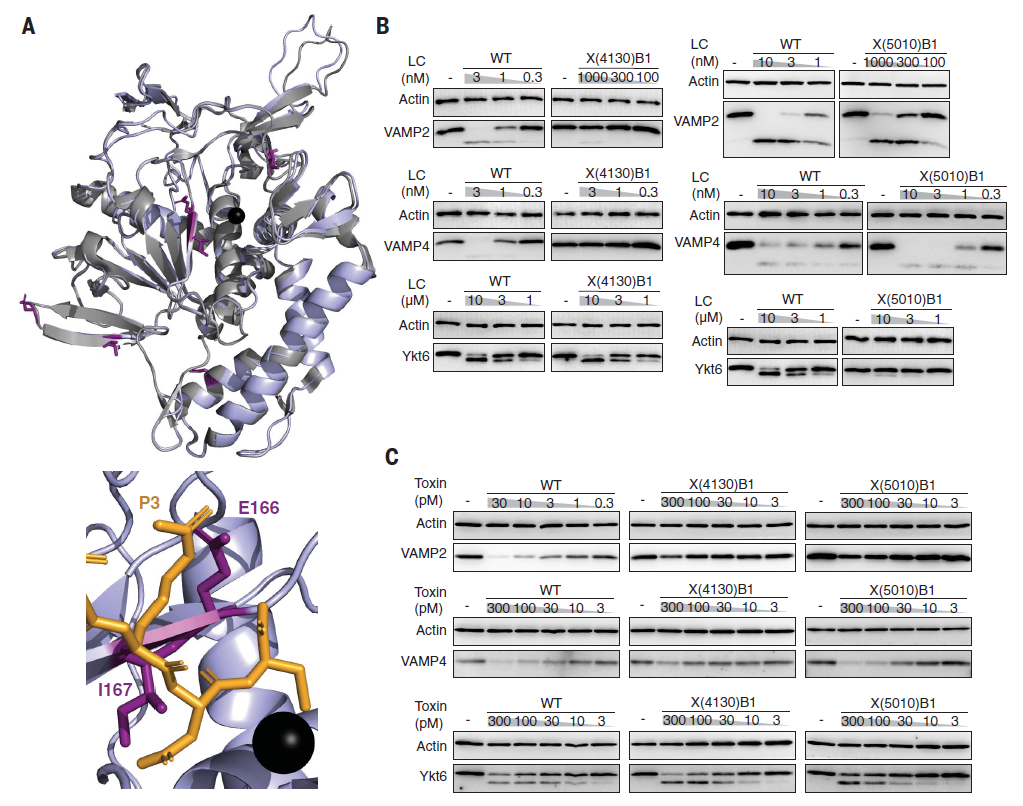 The evolved BoNT proteases have differences in structure, activity and holotoxin compatibility

All in all, this study not only shows the powerful advantages of phage-assisted continuous evolution technology (PACE) in the artificial rapid evolution of biomolecules, but also confirms an important point that humans can customize the substrate specificity of proteases to have new functions. !

Today, the technology developed by Liu Ruqian’s team can be used to improve and change the specificity of proteases, and in the future may be applied to medical treatment, biological research, plastic surgery and even all aspects of human life!

DNA is the carrier of life information, and protein is the executor of life activities. As the founder of single-base editing technology, Liu Ruqian has also made a series of important breakthroughs in the field of phage-assisted evolution.

When human beings can modify genetic genes according to their wishes, and can also modify specific biological proteins in a targeted manner, human beings can dominate their own destiny to a large extent and become their own “gods”, and the progress of science and technology will continue to change this “Myth Story” is reproduced as a reality!