Changes in asymmetry in the cerebral hemispheres increase in Alzheimer

Changes in asymmetry in the cerebral hemispheres increase in Alzheimer.  The cerebral cortex is the structural basis of advanced neurological functions. 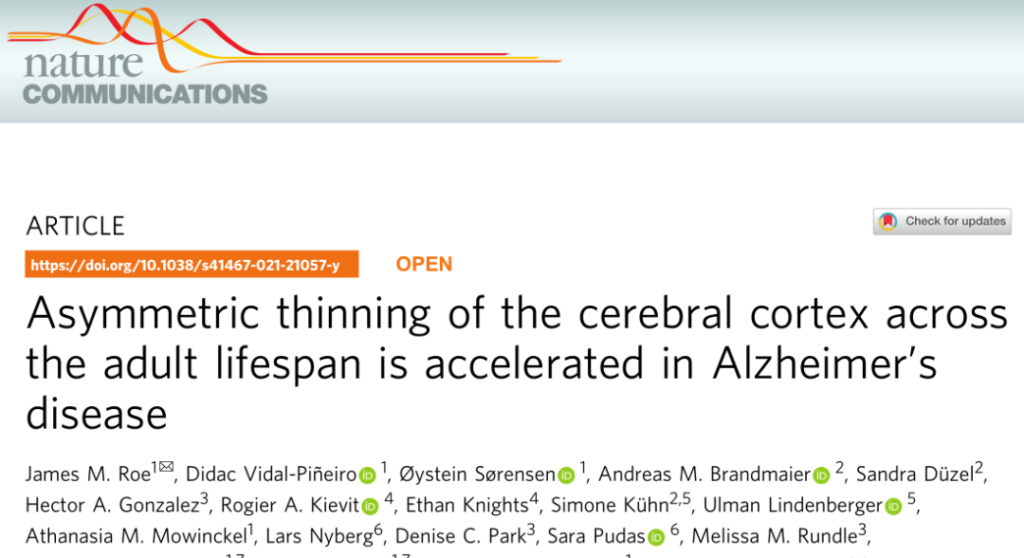 The cerebral cortex is the structural basis of advanced neurological functions. Similar to normal aging, Alzheimer’s disease (AD) is related to the progressive destruction of brain structures and dedifferentiation of functions. The thickness of the left and right cerebral cortex is asymmetric, which is conducive to the effective construction of neural function networks in the left and right cerebral hemispheres, and may also be the basis for the execution of advanced functions such as cognition.

With age and aging, the cortex gradually becomes thinner, but the speed of thinning on both sides is not the same, so the asymmetry of the two hemispheres is also changing. In this study, the author used a large longitudinal data set from 5 healthy elderly cohorts and 1 AD patient cohort to establish the trajectory of the asymmetry changes in the cerebral cortex on both hemispheres during the process of cortical thinning and aging in the healthy elderly group, and The data of cortical asymmetry changes in AD patients were compared.

In order to determine the asymmetry changes in the thickness of the cerebral cortex in normal adults with age, the researchers used a total of 2,577 MRI scan samples of 1084 healthy individuals aged 20.0 to 89.4 years. The measurement and analysis of the left and right hemispheres with age The difference in the thickness of the cortex changes (Figure 1). The results showed that the asymmetry of the prefrontal lobe, anterior temporal lobe/middle temporal lobe, insula lobe, and lateral parietal lobe of the left and right brains changed significantly with age (Figure 2a), and cortical asymmetry was confirmed (Figure 2b) . The study found that the two sides of the cortex with large differences in thickness have more significant changes in symmetry during aging. 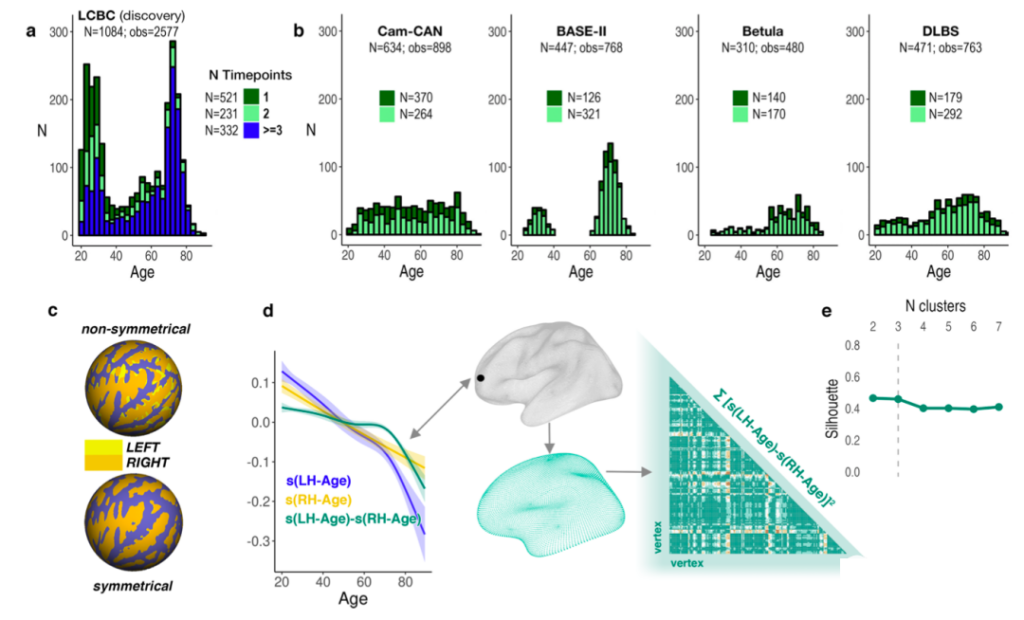 In order to explore the trajectory of changes in the asymmetry of the cerebral cortex in healthy people during the aging process, the researchers conducted a cluster analysis of the data. Figure 3a–c show the final three cluster partitions. Cluster 1 reflects the medial orbitofrontal cortex, dorsolateral prefrontal cortex, and anterior temporal cortex. The analysis results show that the left side of the above area has a faster rate of thinning than the right side (Figure 3a).

The researchers also tested the credibility of the above trajectory through four other independent longitudinal cohort data sets. In summary, it can be concluded that cortical asymmetry changes are one of the characteristics of aging. 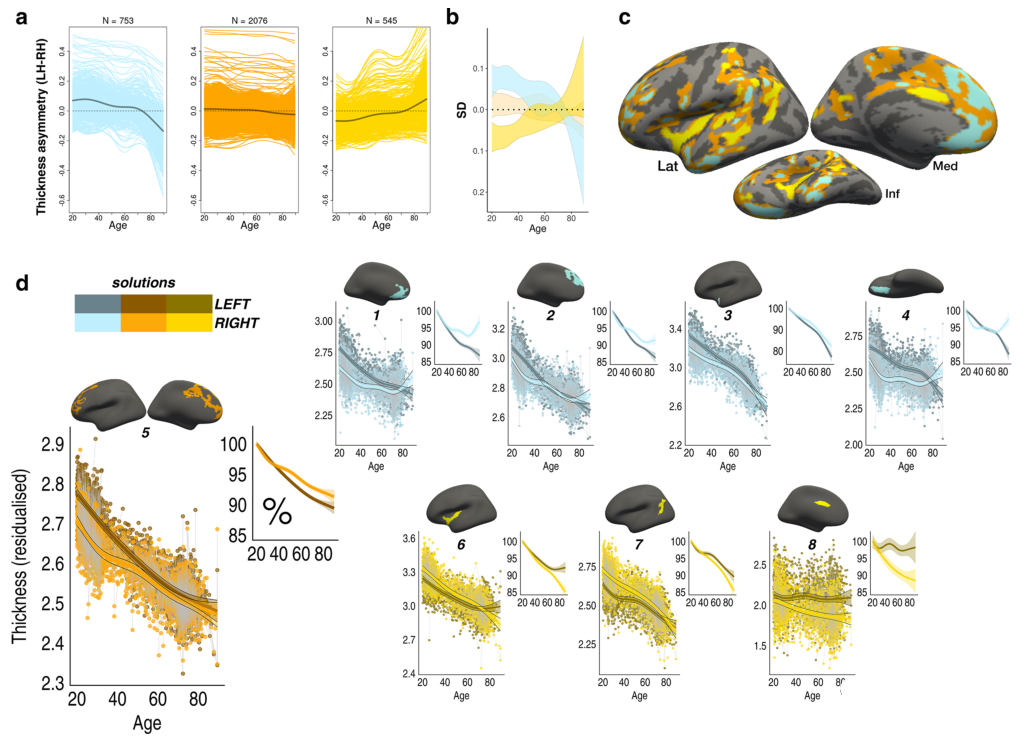 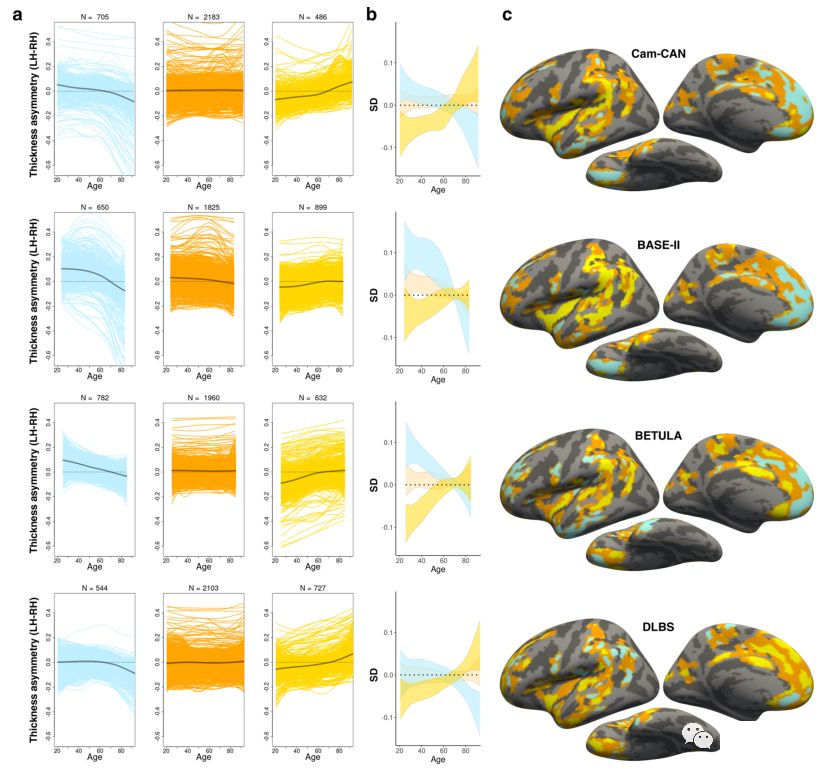 The researchers further explored whether the changing trend of the asymmetry of the cerebral cortex on both sides of AD patients is different from that of normal people. According to the same analysis method, in the frontal and temporal cortex, the left side of AD patients thins faster than the right side (Figure 5b). Compared with healthy people, the asymmetric changes in the frontal and temporal cortex are faster in AD patients. 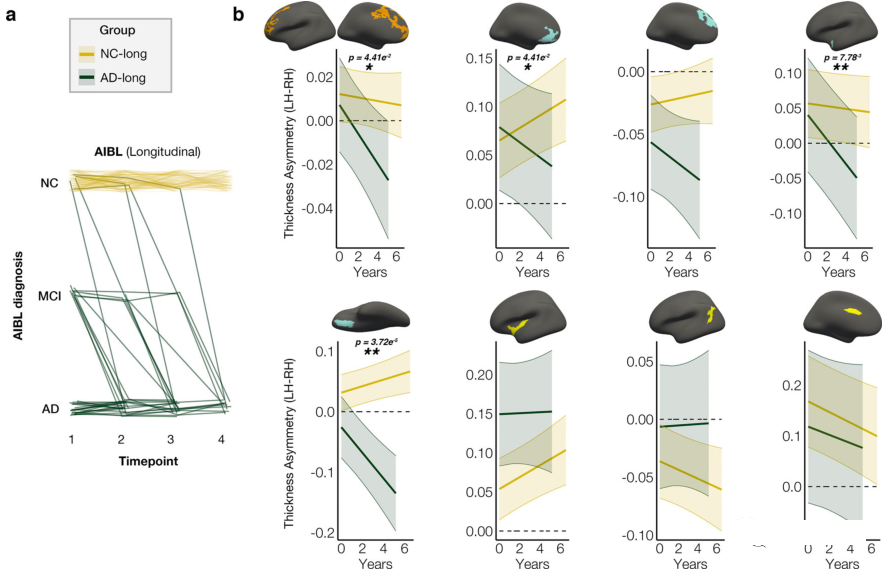