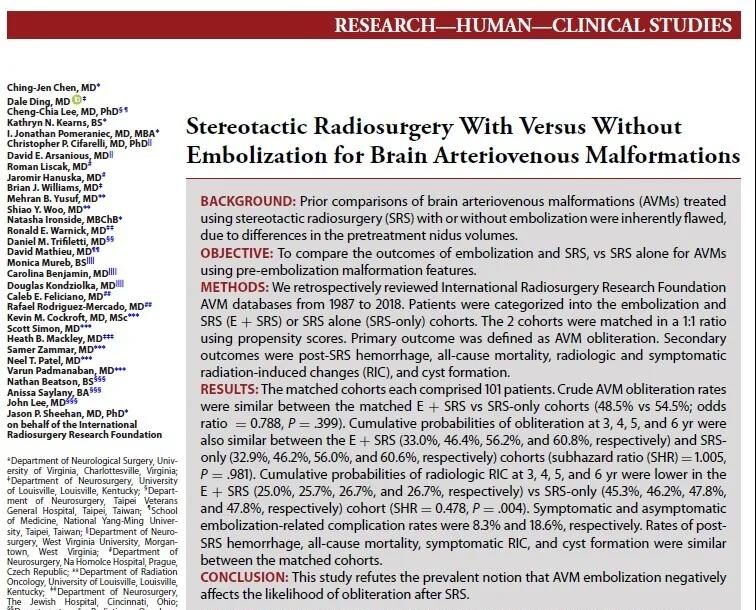 Large cerebral arteriovenous malformations (AVMs) (diameter> 3cm or volume> 12ml) alone use standard stereotactic radiosurgery (SRS), the occlusion rate is lower than that of small AVMs. Neoadjuvant embolization has been used to shrink the focus of large AVMs before receiving SRS treatment. In addition, embolization has also been used for high-risk structures associated with AVM, such as aneurysms in and around malformations or high-flow arteriovenous fistulas. More and more evidence alludes to the negative impact of AVM embolization after SRS treatment on the occlusion rate.

However, the main limitation of these studies on the relationship between embolization and SRS treatment of AVM occlusion rate is that the original size of the untreated AVM cannot be obtained (for example, the volume reduced by embolization or the change of vascular architecture). The purpose of this multicenter, retrospective, paired study is to compare the results of SRS with or without neoadjuvant embolization for AVMs based on the characteristics of new-born AVMs.

This study followed the STROBE statement, and through the ethics of each center, informed consent was exempted. Institutions within the International Radiosurgical Research Foundation (IRRF) were invited to provide AVM cases treated with a single course of SRS between 1987 and 2018 for this study. Patients were divided into two cohorts according to whether they were embolized before SRS: (1) embolization combined with SRS group (E+SRS cohort) (2) SRS treatment group alone (SRS cohort). Then the two groups were matched 1:1 by propensity score. The primary endpoint event is the occlusion of AVM. Secondary endpoints were postoperative bleeding, all-cause death, imaging and symptomatic radiological response (RIC), and cystic change after SRS. 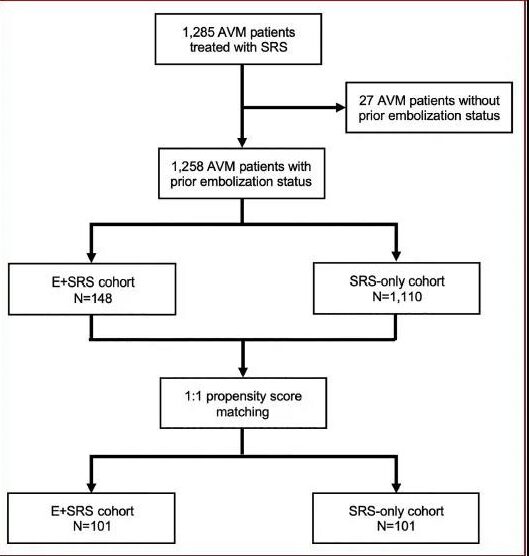 Table 1 compares the baseline characteristics of mismatched patients in the two cohorts. Compared with SRS alone, E+SRS patients have larger AVMs (16.2 vs 4.2ml), fewer patients with deep deformities (24.9% vs 8.1%), and lower marginal doses (21Gy vs 18.9Gy).

Table 2 compares the prognosis of the two unmatched cohorts.

Baseline situation of the matched cohort

101 patients were matched in each cohort. The baseline indicators are stable. Table 3 shows that the baseline conditions of the two cohorts after matching are stable. The most commonly used embolic materials in the E+SRS group: Vinyl alcohol copolymer (Onyx®) accounted for 53.7%, cyanoacrylate (NBCA) accounted for 34.2%, and coils accounted for 23.3%. Among the data available for analysis in the matched E+SRS cohort, pre-SRS embolization only occluded aneurysms in 3.7% (n=2/57).

Table 4 and Figure 3 compare the prognosis of the two cohorts after matching. 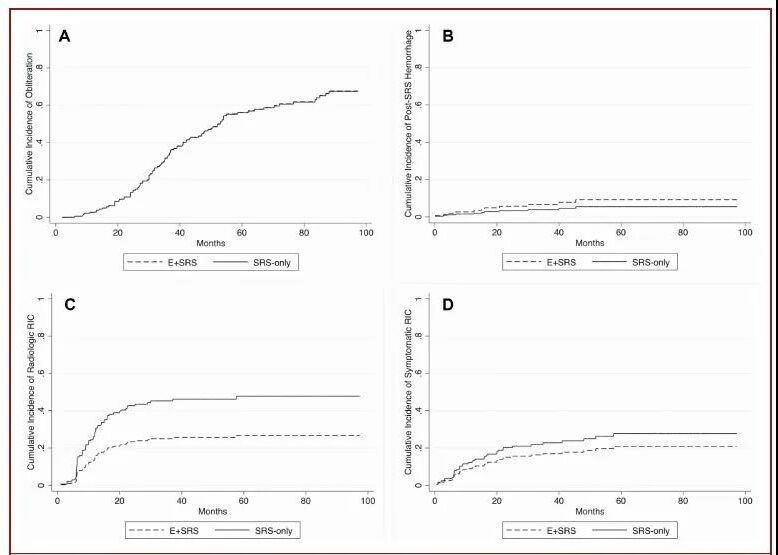 For large AVMs, embolization is a recognized auxiliary method to reduce the size, and it has also become an intervention for the purpose of promoting SRS to treat small AVMs. A large number of previous studies have shown that embolization combined with SRS reduces the occlusion rate of AVM. A meta-analysis of 12 studies showed that the occlusion rate of 681 AVMs who received embolization combined with SRS was lower than that of 978 who received SRS alone (48% vs 63%, P<0.00001). However, patients receiving E+SRS used the characteristics of AVM parameters after embolization. Therefore, these comparisons are biased because patients receiving embolization may have a larger initial volume of AVM and more complex vascular architecture than patients receiving SRS alone. In order to compare the SRS results of embolic and non-embolism AVM, the characteristics of the initial and pre-embolism AVM must be analyzed.

AVM embolization has no negative effects on post-SRS occlusion, post-SRS bleeding and overall complications. Embolization before SRS seems to provide some protection against adverse radiation effects, but this potential benefit may be offset by the risks of AVM neurovascular intervention. The results of this study refute the popular belief that early lesion embolization has a negative impact on SRS-induced occlusion of AVMs. In the multimodal management of AVM with large volume or high-risk vascular architecture, neoadjuvant embolization will not increase the occlusion rate of AVMs after SRS. Therefore, when using this treatment strategy, appropriate AVMs should be carefully selected.