Nobel Prize Winner: Can the cancer cells be squeezed out directly?

The study found that when cells are unable to replicate their DNA during cell division, the process of cell squeezing is triggered, and confirmed that this mechanism is widespread in animals. This mechanism may be that the organism removes cancer cells or precancerous A primitive way of cells brings a whole new way of thinking for cancer treatment.

For all animals, removal of certain cells is necessary for embryonic development, and living cells will naturally fall off in mature tissues. For example, the intestinal wall is completely renewed every few days.

One way for organisms to remove unwanted cells is through a process called cell extrusion, which squeezes cells out of the tissue layer without destroying the remaining cell layer. This process has been observed before, but how organisms trigger this process is still a mystery.

On May 5, 2021, the team of Nobel Prize winner and Professor Robert Horvitz of the Massachusetts Institute of Technology published a research paper titled: Replication stress promotes cell elimination by extrusion in Nature.

Researchers in C. elegans found that when cells are unable to replicate their DNA during cell division, the process of cell extrusion is triggered. And further showed that mammalian cells can drive the same process.

Cell squeezing is a cell removal mechanism used by organisms ranging from sponges to insects to humans. This mechanism may be a way for organisms to remove cancer cells or precancerous cells, bringing a whole new kind of cancer treatment. Ideas. 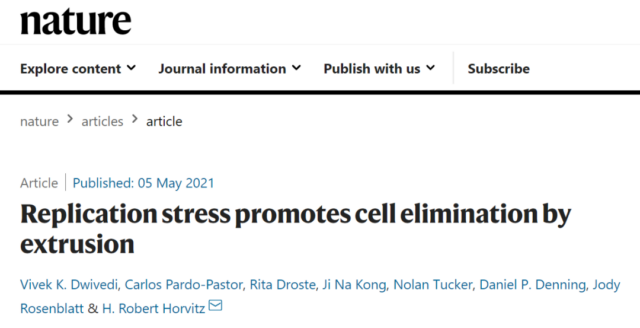 In the 1880s, Professor Robert Horvitz began to study a type of programmed cell death called apoptosis, in which organisms use apoptosis to eliminate cells they no longer need.

Professor Robert Horvitz used C. elegans to conduct research. This transparent worm with a length of only 1 mm is a well-known model animal. The developmental lineage of each cell is known, and each cell line is known. Sub-embryo development all follow the same pattern. During the entire development process, 1090 cells were produced, and 131 cells were killed by apoptosis, and finally an individual containing only 959 cells was formed.

In 2002, Robert Horvitz, Sydney Brenner, and John Sulston won the Nobel Prize in Physiology or Medicine for discovering the genetic regulation mechanism of organ development and programmed cell death.

Later, the team of Professor Robert Horvitz discovered that if nematodes cannot clear cells through apoptosis after genetic mutation, then a small number of these 131 cells will be cleared by cell extrusion, which seems to be a backup for apoptosis. mechanism.

However, how to trigger this cell extrusion process is still a mystery.

Get into the cell cycle

In order to solve this mystery, the research team conducted a large-scale genetic screening, screening a total of more than 11,000 Caenorhabditis elegans genes. The research team knocked down the expression of each gene in nematodes that were unable to perform apoptosis. Through this screening, they were able to identify genes that are essential for turning on cell extrusion during development.

Further experiments showed that the cells that were eventually squeezed out did start to enter the cell cycle and began to copy their DNA. However, they seem to be stuck at this stage and cannot continue to divide, causing them to be squeezed out by other cells. 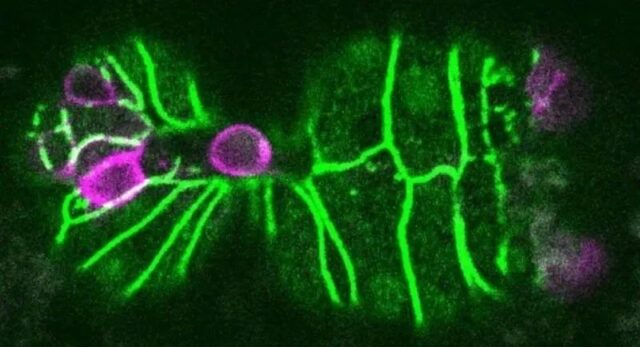 The red cell in the middle is being squeezed out from the embryonic tissue of the nematode (picture source: reference 1)

The research team also discovered that the reason why such an abnormally small cell cannot complete the cell cycle is the protein and DNA components required to replicate DNA. Among other key proteins, these cells may not have enough LRR-1 enzyme, which is essential for DNA replication.

When DNA replication stops, the protein responsible for detecting replication pressure inactivates the CDK1 protein, which quickly stops cell division. In addition, CDK1 also has an important function, which is to control cell adhesion. Therefore, the research team speculates that when the CDK1 protein is inactivated, the cells will lose viscosity and fall off, resulting in being squeezed out.

Next, the research team began to investigate whether mammalian cells might have the same cell extrusion. It turns out that in mammals, cell extrusion plays an important role in replacing the lining cells of the intestines, lungs, and other organs.

The research team used a chemical called hydroxyurea to induce DNA replication pressure in canine kidney cells growing in a petri dish, and found that this treatment increased the cell extrusion rate by a factor of three.

The study also found that in mammalian cells, the well-known cancer suppressor p53 is involved in initiating the extrusion of cells experiencing replication pressure. This indicates that in addition to the known cancer protection effects of p53, it can also play a protective role by squeezing out cancerous cells or precancerous cells.

From lower sponges to higher mammals, cell squeezing can be observed. Moreover, this mechanism of clearing cells through cell squeezing only depends on the cell cycle and does not require special mechanisms like apoptosis. To execute. Therefore, the research team speculated that it may be a very early form of cell clearance, which was later replaced by programmed cell death involving apoptosis.

In general, the study found that when cells are unable to replicate their DNA during cell division, the process of cell extrusion is triggered, and confirmed that this mechanism is widespread in animals. This mechanism may be biological clearance. A primitive way of cancer cells or precancerous cells brings a whole new way of thinking about cancer treatment.

Nobel Prize Winner: Can the cancer cells be squeezed out directly?