Why could “Cell Oxygen Perception” win the Nobel Prize? It is also related to immunotherapy!

Why could “Cell Oxygen Perception” win the Nobel Prize?

We breathe in oxygen in the air and exhale carbon dioxide. The most important transport cell is red blood cells.

It is a hard-working courier who constantly shuttles through the blood vessels to transport oxygen to the cells in need, and then transport the carbon dioxide discharged from the cells.

The human body can use oxygen to carry out various biochemical reactions and provide energy for the body.

When the human body is hypoxic, it will hope to produce more red blood cells and new blood vessels, which is equivalent to widening the road for more couriers to help the body maintain a normal metabolism.

The key gene that regulates this process is the HIF gene.

The three Nobel Prize winners revealed for us how the HIF gene regulates the growth of blood vessels and the production of red blood cells in the body according to the oxygen concentration.

And this research also brings new opportunities for cancer and immunotherapy.

We know that in solid tumors, one of the biggest difficulties that hinder the work of immune cells is that the tumor will form a tumor microenvironment suitable for its survival locally, and an important feature of this microenvironment is hypoxia.

This is mainly because tumor cells replicate more quickly, which means that they need to consume more energy, but the energy supplied by the cells is only so much, which will cause hypoxia.

In this way, our HIF gene will start to act. It will think that the human body is in a state of hypoxia.

At this time, it will adjust the body and create more blood vessels. This is the cunning of cancer cells-it can be used The human body has a normal physiological mechanism to promote one’s own growth.

Cancer cells can build their own energy supply through this approach-promote new blood vessels to provide themselves with more oxygen and nutrients in the blood vessels, and continue to make adequate preparations for development. This is also one of the secrets of tumor survival and development. It can be said:

Hypoxia or hypoxia is a determinant of the growth process of many tumors.

On the other hand, the perception of oxygen also has a very important impact on the function of immune cells, which can determine whether immune cells can play their due role in killing.

The T cell in the human body is one of the most important immune cells.

It has a very important function, that is, it can kill cancer cells in a targeted manner, which also makes it the main force in conquering cancer cells, including tumors that are already in the blood.

CAR-T cell therapy that plays a good role in the treatment. But no matter what kind of technology it is, it is based on the function of T cells.

In a recent study it shows:

We can change the function of T cells through the oxygen and nutrition in the environment where T cells are located, so that T cells can play a more powerful role.

This article was published in the latest issue of “Nature Immunology”. 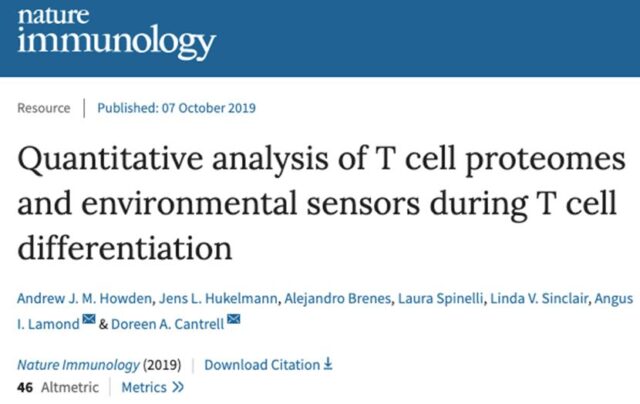 A screenshot of the cover of the article (Image source: NATURE official website)

T cells express more than 9,000 different proteins in the process of participating in the immune response.

The research team mapped out in detail how T cells control and fight diseases.

Among them, they found that when T cells start to work, for example, when they recognize invading bacteria or viruses, they will open the oxygen sensing channel and the key channel for nutrient absorption, so that T cells can better perform and kill. effect.

The reverse is also true, which is why the killing effect of T cells decreases after entering the tumor microenvironment (the inhibition of T cell function may be all-round, not just from PD-1/PD-L1.

The reason for suppressing receptors on immune checkpoints).

Oxygen is so important to the human body and it is so closely related to human health. Therefore, it is especially important to understand how cells perceive and regulate oxygen.

This is why the 2019 Nobel Prize in Physiology or Medicine was awarded to these three professors. Original intention.

Regarding immunotherapy, whether it is the occurrence and development of cancer cells or the role of T cells, there are many connections with oxygen-sensing genes.

With the in-depth research of basic mechanisms, immunotherapy will also play a better role.

Why could “Cell Oxygen Perception” win the Nobel Prize? It is also related to immunotherapy!