Father and son won the Nobel Prize in medicine 40 years apart, he found the secret of human origin.

“Humans have always been interested in our own origins. Where do we come from? How are we related to our ancestors? What makes us Homo sapiens different from other hominids?”

The Impossible: Sequencing the genome of the extinct Neanderthal. He also discovered a previously unknown hominid: the Denisova.

1. The 2022 Nobel Prize in Physiology or Medicine was announced, and Svante Pääbo, a scientist from Sweden, was awarded the prize. He has made outstanding contributions to the discovery of “discoveries about the extinct human genome and human evolution “.

2. Coincidentally, Pabo’s father was the biochemist Sune Bergström, who also won the Nobel Prize in Physiology or Medicine in 1982 for his discovery of prostaglandins and related substances. After 40 years, Pabo received the same honor as his father.

3. The significance of Pabo ‘s genetic study of extinct species has been questioned, Pabo pointed to the exchange of genes between Neanderthals and modern humans. Neanderthal genes are associated with the risk of immune diseases, and in Europeans, it is because of the Neanderthal genes that some viruses are infected. Sweden ‘s Karolinska Institutet announced that the 2022 Nobel Prize in Physiology or Medicine will be awarded to scientist Svante Pääbo for his discoveries about the “extinct human genome and human evolution” contribution. Source: nobelpri ze.org

Importantly, Pääbo also found that genes were transferred from these now-extinct hominids to Homo sapiens after humans left Africa about 70,000 years ago.

This ancient gene flow is still biologically relevant to humans today, for example by affecting our immune system’s response to infection.

Pääbo’s pioneering research gave rise to a whole new scientific discipline: paleogenomics. His research provides a basis for exploring what makes us uniquely human by uncovering the genetic differences between all living humans and extinct hominids. “

– Remarks for the 2022 Nobel Prize in Physiology or Medicine

Why did Swante Pabo win the 2022 Nobel Prize in Physiology or Medicine? what his discovery means

On October 3, the 2022 Nobel Prize in Physiology or Medicine was announced, and Svante Pääbo, a Swedish-born evolutionary geneticist at the Max Planck Institute for Evolutionary Anthropology in Germany, won the award alone.

The reasons for the prize published by the Nobel committee say the Swedish geneticist “did the seemingly impossible when he sequenced the first Neanderthal genome and discovered that Homo sapiens interbred with Neanderthals. “. The discovery was made in 2010. Twelve years later, the Nobel Committee for Medicine awarded it. 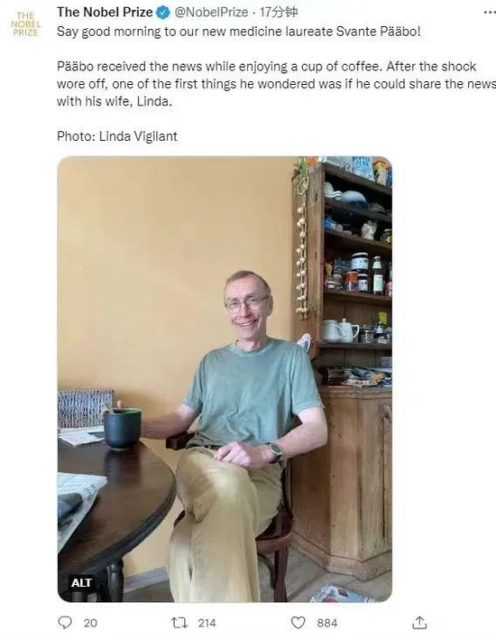 Swante Pabo was drinking coffee when he learned of his award . Shocked, he asked if he could tell his wife Linda the news. Then Linda took this picture of him. Source: twitter

Pabo’s main achievements, from the study of extinct Neanderthals:

2. A study of DNA from a finger bone found in Denisova caves in Siberia showed that the finger did not belong to modern humans, but to an extinct human relative. This species is now named Denisovans.

3. In 2014, the book “Neanderthals: The Search for the Lost Genome” was published. In this book, Pabo, in the form of a memoir, popularizes the work on the Neanderthal genome map and expresses his views on human evolution.

Pabo’s award came as a surprise to many! It was indeed a blast. Seeing his research results, some people may be a little trance: Did Nobel add an archaeological award? Or was the literary prize given out ahead of schedule?

Pabo also created a miracle of the Nobel Prize in Medicine. His father, Sune Bergström, a biochemist, won the Nobel Prize in Physiology or Medicine in 1982 for his discovery of prostaglandins and related substances. And 40 years later he was awarded the same honor as his father.

▎Swante Pabo’s father won the Nobel Prize in Physiology or Medicine in 1982 with two other scientists. Source: nobelprize.org

Lesser known is that, in 1975, his father was also appointed to the board of directors of the Nobel Foundation in Sweden.

According to other relevant information, Pabo served as the Asian scientific consultant of Suzhou Cold Spring Harbor in 2008.

Last year’s Nobel Prize in Medicine was awarded to David Julius and Ardem Patapoutian for their discovery of how the human body senses temperature and touch.

The cash prize for the award is SEK 10 million (nearly $900,000) and will be handed out on December 10. The money comes from the legacy of the prize’s creator, Swedish inventor Alfred Nobel, who died in 1895.

Pabo is known as one of the founders of paleogenetics, a discipline that uses genetic methods to study early humans and other ancient populations.

In 1997, Pabo and colleagues reported their successful sequencing of Neanderthal mitochondrial DNA (mtDNA) from a specimen found in the Feldhof Caves in the Neanderthal Valley.

What’s the point of doing genetic research on species that went extinct 2,400 years ago? Swante Pabo’s award shows the importance of basic research.

It may be difficult for some people to understand the significance of genetic research for an extinct species. What is the importance of genes eliminated by evolution?

In 2020, Pabo put forward the idea that Neanderthal genes are associated with the risk of immune diseases, and in Europeans, it is because of the Neanderthal genes that some viruses are infected ( Such as the new coronavirus), more severe symptoms are more likely to appear.

Therefore, Pabo’s research is related to physiology and medicine.

Today is an era of traffic. With traffic, there will be internet celebrities. So everyone has an illusion: great scientific research should be the focus of attention, and should be able to directly stimulate GDP.

Pick an unpopular topic, and if you do it well, you may get an unpopular prize. But unpopular research is not necessarily easy to do.

For example, Pabo’s genetic sequencing of ancient organisms is particularly vulnerable to the interference of modern human genetic pollution.

Of course, it does not mean that as long as the research is done well, there will be awards.

In fact, behind every Nobel laureate, there are many researchers who have important research but did not win the award.

Scientific research is not easy, but do it and persevere.