Nobel Prize winner and discoverer of HIV virus dies after being strongly opposed to the COVID-19 vaccine.

Born in France on August 18, 1932, Luc Montagnier was awarded the Nobel Prize in Physiology or Medicine in 2008 for his discovery of the human immunodeficiency virus (HIV) that causes AIDS .

On February 9, 2022, Luc Montagnier passed away in France, marking the end of 90 years of this great and controversial scientist. 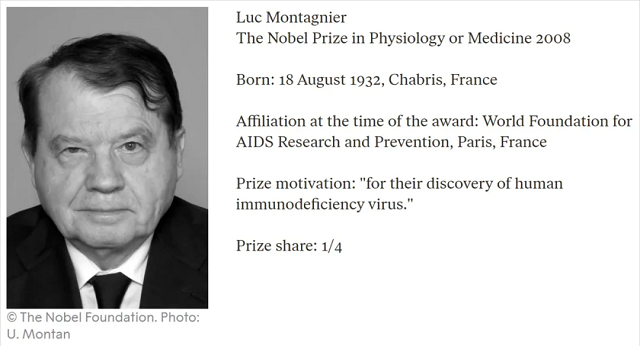 Influenced by his father, Luc Montagnier was interested in scientific experiments as a child. Later, his grandfather died of colon cancer, so he decided to devote himself to medical research.

On June 5, 1981, the US Centers for Disease Control and Prevention (CDC) reported a case report of five AIDS patients, which was the first official record of AIDS in the world. In 1982, the disease was officially named ” AIDS ” (AIDS) . Since then, AIDS has spread rapidly around the world.

In 1982, Willy Rozenbaum, a clinician at the Bichart Hospital in Paris, France, asked virologist Luc Montagny to help determine the cause of the then mysterious new infectious disease AIDS .

Luc Montagnier ‘s team discovered a retrovirus from the lymph nodes of patients, named it lymph node-associated virus (LAV) , and published this discovery in the journal Science on May 20, 1983 . This is actually the later famous Human Immunodeficiency Virus (HIV) .

Luc Montagnier was undoubtedly a great virologist. He was one of the first scientists to discover the HIV virus, and he made great contributions to the research and prevention of AIDS, which also won him the recognition of the scientific community. Prestige and recognition of the Nobel Prize.

But it is such a virologist who has made outstanding contributions to all mankind, but has published a series of pseudoscientific remarks in recent years, which has also made him controversial .

For example, he has published papers claiming that the DNA water solution of bacteria and viruses emit electromagnetic wave signals.

In addition, for many years, he has been opposed to vaccination , and is also a “benchmark” of the anti-vaccine group, and he has personally been there to support anti-vaccination activities.

He also said that anyone who has been vaccinated against the COVID-19 will die, not saved . The original words are: There is no hope and no possible treatment for those who have been vaccinated already. We must be prepared to incinerate the bodies.

His irresponsible remarks, coupled with his great personal aura, have had a very bad influence. So much so that the French president had to come out and issue a statement, saying that these claims by Luc Montagnier have no scientific basis.

On February 9, 2022, the news of Luc Montagni ‘s sudden death came out. Because he strongly opposed the COVID-19 vaccine before his death, it once triggered many conspiracy theories rumors. But his faithful collaborator Dr Gérard Guillaume said Luc Montagnier left this world peacefully in the company of his children in a hospital in Neuilly-sur- Seine , France.