For biological cells, one of its most basic and important functions is to obtain energy and nutrients from the environment and discharge metabolic waste. In particular, the energy-consuming active transportation function can help cells actively absorb necessary nutrients, store energy, and discharge waste.

However, for a long time, although various artificial cells can mimic the functions of biological cells well, they still lack the ability of active transportation.

Specifically, they used artificial polymers to create a spherical membrane the size of red blood cells, drilled a nanochannel in the membrane, and added a chemically reactive material to the nanopore to act as a pump. When activated by light, this material will produce a chemical reaction, forming a vacuum, and actively suck the extra-membrane material into the cell. When the chemical reaction is reversed, the pump can remove the intracellular material from the cell. 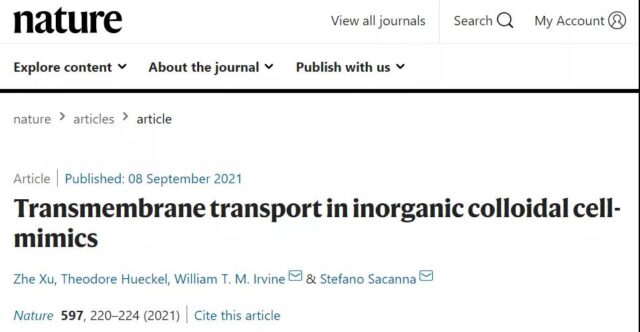 Regarding the results of this study, Professor Sacanna, one of the corresponding authors of this article, said, “The core of the cell structure design is to coordinate the physical separation of the cell membrane to provide power from the inside to enable it to ingest, process and exclude foreign bodies. The artificial cell simulation we designed For the first time, objects have realized the function of active transportation.”

Cells are the basic building blocks of life. The analysis of cell structure, function and behavior is of great significance for exploring the mystery of life, the mechanism of disease generation, and disease treatment and diagnosis.

Although significant progress has been made in cell biology research, due to the complexity of cell structure, how the tens of thousands of genes, as well as the countless small molecules and organelles in the cytoplasm, coordinate to perform basic life functions to maintain life. The mechanism is not fully understood.

In the past, biological research has always focused on top-down, that is, how the composition of cells and genes function, and how their functions are. Now, advances in biological technology can enable researchers to adopt a bottom-up strategy to reconstruct cellular biological processes, the so-called artificial cells.

Artificial cells are simplified cell models constructed artificially, which can effectively overcome many problems faced in traditional cell research, are conducive to the study of the molecular mechanism of action within and between cells, and help establish the connection between living and non-living systems. Research on the origin of life provides the corresponding theoretical basis.

For example, as early as 2001, the research team led by the well-known biologist Dr. Craig Venter successfully constructed the world’s first manmade cells after spending 15 years and spending more than 40 million US dollars.

In 2021, the research team led by Professor Elizabeth Strychalski, head of the NIST cell engineering team, has successfully created “cells” that can grow and divide normally by adding synthetic genes.

Obviously, for bioengineers, it is not enough to perform certain functions of cells alone, such as protein production and DNA replication. Only by designing a complete cell structure and realizing the cooperation of various units can fully synthetic artificial cells be truly realized.

The artificial cell membrane is undoubtedly a very important part of this.

The cell membrane seems to have a simple structure, but it maintains a stable internal microenvironment, controls the exchange of internal and external substances, assists the cytoskeleton in shaping the cell shape, and carries a variety of protein machinery to achieve various physiological functions. It is one of the most basic life components of cells.

In particular, the active transport function of cell membranes ensures that living cells actively choose to absorb the nutrients they need in accordance with the needs of life activities, discharge waste generated by metabolism and substances harmful to cells, and complete the basic guarantee for various life activities.

In order to design cell mimics, the researchers first used polyhedral oligomeric silsesquioxane, methacryloxypropyltrimethoxysilane and other polymers to create a red blood cell-sized cell membrane to control the entry and exit of substances. At the same time, they drilled a micropore in the spherical membrane to form a nanochannel, which was used to simulate the protein channel for material exchange.

We all know that the cell membrane needs to consume energy in the process of active transport. For living biological cells, mitochondria and ATP are the source of energy. In the artificial cell simulation, Professor Sacanna and others added a solid photocatalyst to the nanochannel. 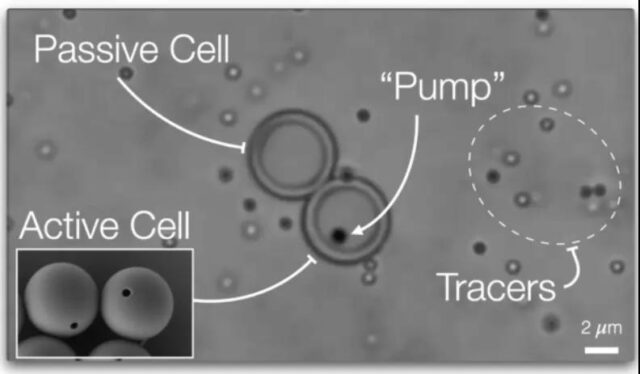 Subsequently, the researchers tested this cell mimic in different environments. In an experiment, they suspended the cell mimics in water, activated them with light, and found that they can actively take in substances from the surrounding water. This means that this cell simulant may be used to clean up environmental pollutants in the future.

In this regard, Professor Sacanna said, “This is like a game of peas, our cell simulants can collect pollutants everywhere and remove them from the environment.”

In another experiment, the researchers also confirmed that cell mimics can swallow E. coli and trap them in the membrane, which may provide a new way to fight bacteria in the body.

Another future application of such cell mimics may be drug delivery, as they can release pre-loaded substances when activated. Currently, researchers are continuing to develop and study this cell mimic, including constructing cell mimics with different functions, and exploring how different cell mimics communicate.