Self-replicating RNA may break through limitations of mRNA application

Self-replicating RNA may break through limitations of mRNA application.

Breaking through the limitations of mRNA application, can this technology lead to a new generation of therapy?

The development of mRNA-based vaccines and therapies has recently become one of the hotspots of people’s attention.  Last week, Laronde, which was committed to the development of circular RNA technology, completed a US$440 million Series B financing. Today, another emerging mRNA has appeared in people’s field of vision.

Replicate Bioscience announced that it has completed a US$40 million Series A financing to develop innovative therapies for cancer drug resistance, as well as the treatment of various diseases such as autoimmunity and inflammation. The company’s technology platform is an innovative technology called self-replicating RNA (srRNA).

mRNA has been successful in the development of infectious disease vaccines. However, it is still facing multiple challenges to develop it into therapies for the treatment of diseases. What is the difference between self-replicating RNA technology and traditional mRNA technology? It can help expand mRNA Is the scope of application?

What is self-replicating RNA?

The more common name of self-replicating RNA is self-amplifying RNA (saRNA). Compared with ordinary mRNA, the important difference is that it can use its own RNA sequence as a template for self-replication. Usually mRNA encodes the protein that needs to be expressed, and the ribosome in the cell is used to complete the translation and protein production. In addition to expressing the target protein, saRNA also carries a sequence capable of expressing RNA polymerase (called RNA-dependent RNA polymerase, RdRP). After this RNA polymerase is produced, it can use saRNA as a template to produce more copies of saRNA.

Whether it is used as a vaccine or a therapy, the mode of action of mRNA is to stimulate the immune system to respond or treat by expressing proteins. Therefore, the level of protein expression is closely related to the efficacy of the therapy. One of the drawbacks of traditional mRNAs is that they are not very stable and will be degraded within a few days within the cell, resulting in an unsustainable protein expression level. If it is used as a long-term treatment of diseases, it may require patients to inject multiple and large amounts of mRNA, which may increase the toxic side effects of mRNA therapy.

The main advantage of self-amplifying RNA is that it can reach the same protein expression level of traditional mRNA at a very low dose. Studies have shown that as a vaccine, saRNA is hundreds of times or even thousands of times smaller than traditional mRNA. Under the circumstances, the same immune response can be produced. As saRNA may extend the time that the antigen protein exists in the body, this may enhance the immune response, so that only one shot of saRNA-based vaccine can achieve the effect of two shots of traditional mRNA vaccination. In terms of production, lower effective doses may reduce the production cost of saRNA. As a therapy, this feature may reduce the dose and number of injections used in mRNA therapy, thereby prolonging the therapeutic effect, and reducing the possible toxic side effects of mRNA and delivery vehicles.

Another feature of saRNA is that it may have the potential to stimulate an immune response. There are sensors that recognize the invasion of foreign viruses in human cells, and they are called pattern recognition receptors. One of the signals they recognize is the double-stranded RNA that appears in the cytoplasm, because this may represent the replication of viral RNA in the cell. In the process of replication, saRNA will form double-stranded RNA, which is very similar to the viral RNA in the process, so it may stimulate the innate immune response of cells. This may further enhance the effect of the vaccine.

However, self-amplified RNA also faces unique challenges in terms of research and development. As saRNA connects the sequence encoding the RNA polymerase with the sequence expressing the target protein, the molecular weight of the entire mRNA molecule is much larger than that of the traditional mRNA. Therefore, special design or formulation adjustment of the delivery vector is required in the delivery method. Excessive molecular weight may lead to a decrease in delivery efficiency.

The trans-amplification technology separates the sequence encoding the RNA polymerase from the sequence expressing the target protein, which is also a strategy to improve the efficiency of RNA delivery.

In addition, the RNA polymerase responsible for amplifying saRNA is a virus-derived protein. What kind of immune response will they stimulate? The current research information in this area is still insufficient. 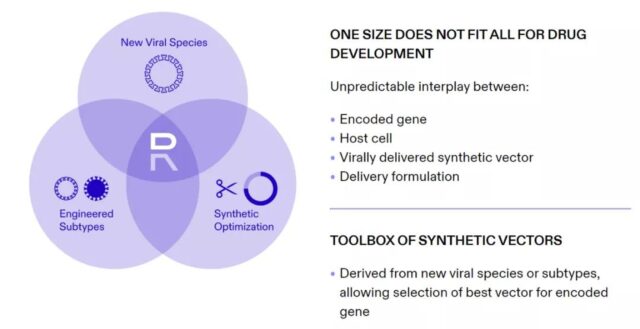 Replicate Bioscience, which completed the Series A financing today, said that due to the complex interaction between multiple factors, the company’s strategy is to individually design the corresponding gene sequence, RNA polymerase and delivery method for each therapy. The company will explore new virus species or subtypes, and use synthetic biology to modify the vector to maximize the benefit/risk ratio of the therapy.

At present, the pipeline is mainly for cancer vaccines and infectious disease vaccines

At present, many biotechnology and pharmaceutical companies have carried out product development based on RNA technology that can be self-amplified. Most of the main areas of research and development products are infectious disease vaccines and cancer immunotherapy/vaccine.

For example, the rabies vaccine developed by GlaxoSmithKline using saRNA technology has entered the clinical development stage. The cancer vaccine developed by Gritstone bio using saRNA technology has also entered phase 2 clinical trials. The principles of the three candidate therapies in Replicate Bioscience’s pipeline to overcome tumor resistance are similar to those of cancer vaccines. They express proteins that cause tumors to develop drug resistance. After entering the cells, they will replicate in large numbers to simulate viral infections, thereby stimulating the immune system to recognize and attack tumor cells that express the proteins that cause drug resistance.

The company also has an investigational therapy for the treatment of inflammatory diseases and autoimmune diseases. This RNA therapy is designed to reduce the immunogenicity of RNA, allowing them to express a large number of proteins that inhibit immune response in diseased tissues.

To expand mRNA to applications other than vaccines, it is necessary to solve the problem of increasing the protein level of mRNA expression and the potential toxic side effects of mRNA therapy due to multiple administrations. Laronde and Replicate Bioscience, which have recently completed financing, represent the research and development direction of using circular RNA and self-amplified RNA to solve these problems. We expect that with the continuous advancement of RNA technology, it can benefit more patients with diseases in addition to vaccines.

Reference: Self-replicating RNA may break through limitations of mRNA application.

[2] Spurred on by Moderna and Pfizer’s success, a Belgian biotech has big ambitions for its self-amplifying RNA vaccine play. Retrieved September 8, 2021, from https://endpts.com/spurred-on-by-moderna-and -pfizers-success-a-belgian-biotech-has-big-ambitions-for-its-self-amplifying-rna-vaccine-play/