The introduction of Novartis CD19 CAR-T with T-chargeTM process

The introduction of Novartis CD19 CAR-T with T-chargeTM process.

YTB323 is a CD19-directed autologous CAR-T cell therapy with a greatly simplified manufacturing process that eliminates complexities such as long culture cycles.

The new T-Charge ™ manufacturing platform was evaluated in a preclinical setting, which reduced ex vivo culture time to approximately 24 hours, with the final product being manufactured in less than 2 days.

T cells were enriched from healthy donor leukocytes, then activated and transduced with a lentiviral vector encoding the same CAR used for tisagenlecleucel.

After manufacture, the CAR-T product was evaluated in in vitro and in vivo T cell function assays in immunodeficient NSG mice (NOD-scid IL2Rg-null) vaccinated with pre-B-ALL cells (NALM6) or DLBCL cells line (TMD-8) to evaluate antitumor activity and CAR-T amplification.

YTB323 CAR-T cell potency was assessed in vitro using a cytokine secretion assay and a tumor repeat stimulation assay designed to test the persistence and depletion of the cellular product. Compared with CTL*019, YTB323 T cells secreted 10- to 17-fold higher levels of IL-2 and IFN-γ after CD19-specific activation.

Furthermore, YTB323 cells were able to control tumors with a 30-fold lower effector:tumor cell ratio and were stimulated at least 7 more times in repeated stimulation experiments. Both assays clearly demonstrated the enhanced potency of YTB323 CAR-T cells in vitro.

The final preclinical assessment of YTB323 cell efficacy was in vivo expansion and antitumor efficacy against B cell tumors in a multi-dose immunodeficient NSG mouse model by comparison with CTL*019.

The expansion of CD3+/CAR+ T cells in blood was analyzed weekly by flow cytometry for up to 4 weeks. Dose-dependent expansion (Cmax and AUC 0-21d) was observed for both YTB323 and CTL*019.

Peak expansion (Tmax) was observed to be delayed by at least 1 week in YTB323 compared to CTL*019, supporting that the increase in expansion is driven by the less differentiated T cell phenotype of YTB323.

In the DLBCL model TMD-8, only YTB323 was able to control tumors, while CTL*019 led to tumor progression at various doses. This ability of YTB323 cells to control tumors at lower doses confirms their robustness and efficacy. 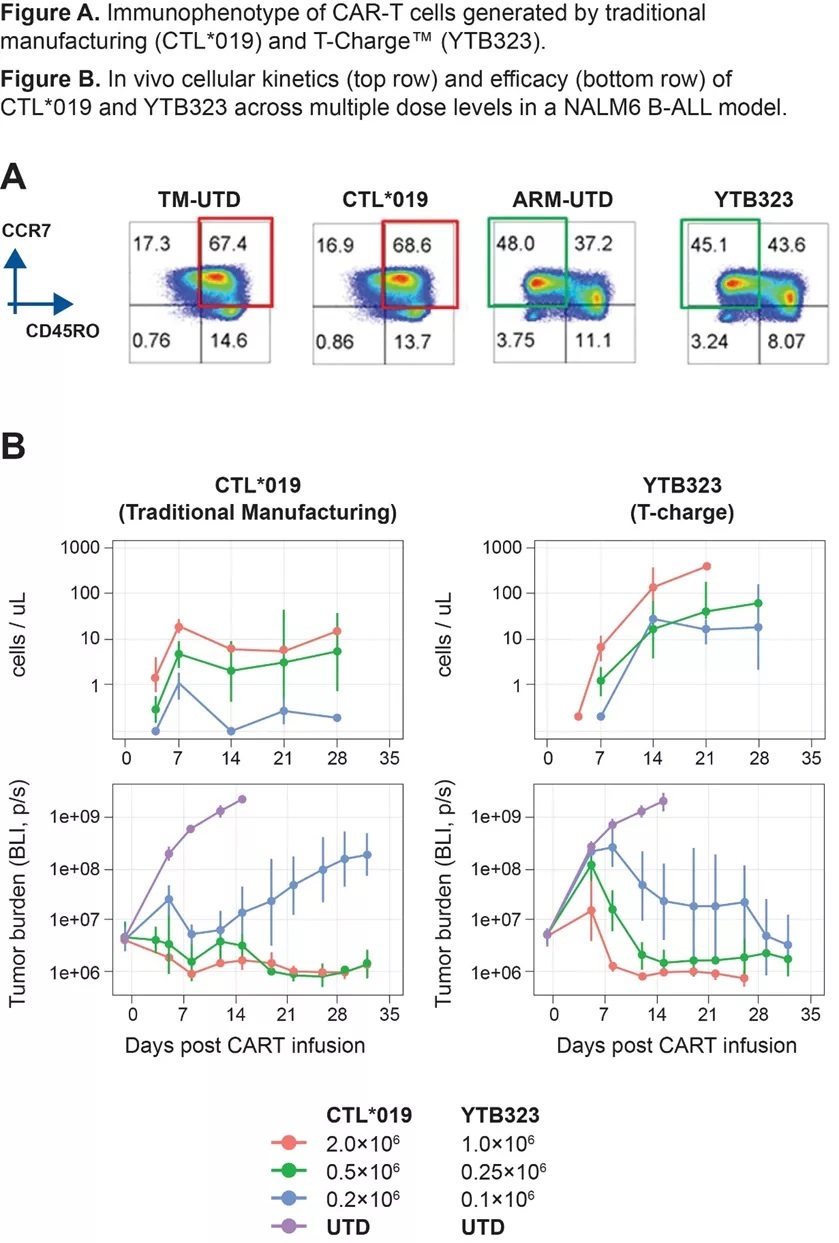 The new manufacturing platform T-Charge™ for the YTB323 is simplified, shortened and does not require expansion. Therefore, it preserves T cell stemness, which is associated with improved in vivo CAR-T expansion and antitumor efficacy.

Compared with approved CAR-T therapies, YTB323 has the potential to achieve higher clinical efficacy at respective lower doses. T-Charge™ is designed to revolutionize CAR-T manufacturing while increasing the likelihood of long-term deep response.

Clinical trials of cells made by T-Charge

This Phase I, multicenter, dose-escalation study (NCT03960840) is evaluating the safety and preliminary efficacy of YTB323 in patients with B-cell malignancies.

The results presented here focus on the DLBCL cohort. Eligible patients were adults with measurable disease, ECOG 0-1, and r/r DLBCL at enrollment with ≥2 lines of prior therapy, including after autologous hematopoietic stem cell transplantation (aHSCT).

The primary endpoint was the incidence of dose-limiting toxicity (DLT) in the first 28 days and the safety of determining the recommended phase II dose (RP2D).

Clinical trial results of cells made by T-Charge

The median age was 65 years; most (60%) had received 2nd-line therapy and 4 (27%) had received aHSCT. All adverse events were reported regardless of study drug relationship. 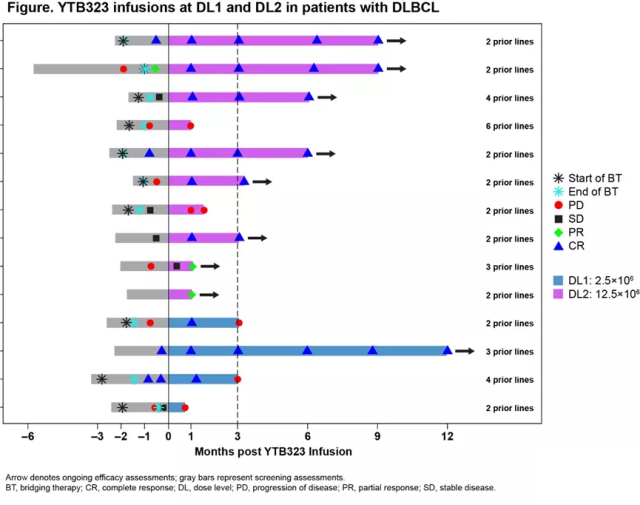 Although long-term persistence could not be assessed, 3 of 8 patients with DL2 had 3-month follow-up and 3 had CAR expression detected by flow cytometry (≥1%).

The introduction of Novartis CD19 CAR-T with T-chargeTM process