The dawn of the end of the global pandemic is here? African countries may soon realize: the epidemic enters the “next stage” and becomes an endemic epidemic.

When the results of the study came out, Condwani Jambu was stunned…..

Last year, the immunologist from the Malawi-Liverpool-Wellcome Trust Clinical Research Program in Africa launched a study to determine exactly how many people in the country have been infected with the virus since the global pandemic began. .

Jambo said he knew the total number of cases would be higher than the official figure, but the results were still unexpected.

His research shows that the scale of the spread of the COVID-19 is larger than expected, and the vast majority of Malawians have been infected with the COVID-19 before the emergence of the Omicron variant. “I was absolutely shocked,” he said.

More importantly, the findings suggest that Malawi has entered a sort of “holy grail” phase in recent months, Jambo said. Many European and American countries still caught in the “Omicron” wave say that at this stage, the COVID-19 pandemic will become an endemic epidemic, and the COVID-19 virus will become a more predictable seasonal virus , like the flu or the common cold.

According to foreign media reports on the 28th, in fact, many top scientists in Africa said that research on the population and the experience of African countries with the Omicron variant proves that Malawi is only a large part of the African continent that seems to have entered the “next stage”. ” one of the countries. In these countries, Covid-19, while not yet fully endemic, has become much less of a threat.

Malawi mystery: 80% of the population is infected, but the severe rate is extremely low

To understand how these scientists came to this view, it is first necessary to understand the situation of the COVID-19 epidemic in countries such as Malawi.

Before the Omicron wave, Malawi did not appear to have been hit hard by the Covid-19 pandemic.

Jambo said that before July last year, Malawi had experienced several waves of COVID-19 epidemics, but only a small number of Malawians seemed to be infected, “If based on the number of individuals who tested positive, it may be less than 10% of the total population. %”.

And even during the peak of successive waves of Covid-19 in Malawi, hospitalizations were relatively low.

Jambo believes that this is likely to mask the real epidemic situation in Malawi. And one of the reasons is because the country’s population is very young, with an average age of around 18.

He explained that this suggests that prior to Omicron’s arrival, most infections in the country were likely asymptomatic and unlikely to show up in official statistics.

People don’t get sick enough to need to go to the hospital, and coronavirus tests are in short supply in the country, so they’re usually only used for people who have severe symptoms or who need to travel. 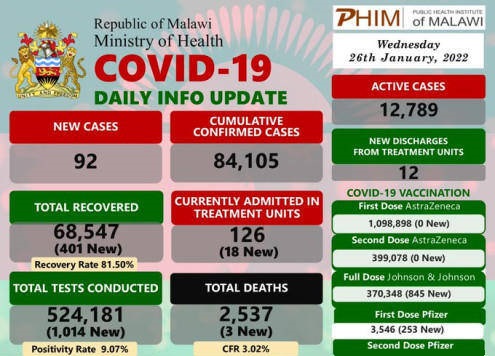 ▲ Less than 5% of Malawians have been fully vaccinated, but severe illness and mortality are extremely low

So, to fill in the information gap and restore the truth, Jambo and his collaborators turned to another potential source of information—the National Blood Sample Bank.

After testing blood samples for Covid-19 antibodies, they found that up to 80% of the population had been infected with Covid-19 at the start of Malawi’s third wave delta outbreak last summer.

“There’s absolutely no way we could have guessed that the virus had spread so widely,” Jambo said.

Jambo also said other countries in Africa, including Kenya, Madagascar and South Africa, have conducted similar studies. And the results were almost the same everywhere, and the infection rate of the COVID-19 was already very high before the Omicron variant appeared.

Not only that, but Jambu believes that the blood samples from the Malawians also explain a key feature of the recent Omicron outbreak, which is the death toll from the Omicron infection compared to the already low death tolls of previous waves. There are far fewer people.

Fewer than 5% of Malawians are reported to have been fully vaccinated. So Zamble pointed out that their “apparent resistance” to severe disease was likely the result of previous exposure to earlier mutant strains. “Right now, we have Beta, Delta and Prototype (coronavirus). In severe cases, the combination of these three strains seems to be able to neutralize the Omicron variant,” he said.

African countries are now “dawning”: the COVID-19 epidemic may have reached a turning point

According to reports, the wave of COVID-19 epidemics caused by the Omicron strain has now reached its peak in Africa.

African country after country appears to be experiencing the same pattern: a massive rise in infections without a corresponding rise in hospitalizations and deaths.

“I think we should take solace in the fact that this is the least severe tsunami in South Africa,” said Shabir Madhi, a vaccinologist at the University of the Witwatersrand in South Africa.

Most likely, he said The reason is that, like Malawi, South Africans have acquired immunity through previous infections. But one difference is that hospitals in South Africa were overcrowded during last summer’s Delta outbreak, compared with Malawi, which has a young majority.

But whether Africa is really in “a less dangerous situation” now depends on a “critical question”: whether the immunity that protects people from getting sick is maintained, says Emory University biologist Rastrom Antija how long? Since the outbreak, Antia has been researching what it takes for the new coronavirus to become a local epidemic.

Madhi said there is “reason for optimism” because previous research has shown that this protection can last at least a year.

Therefore, he believes that in African countries, and many other low- and middle-income countries that have experienced similar outbreaks, it may be clear that “we have reached a turning point in this pandemic”.

So what will it look like when the COVID-19 becomes a local epidemic? First, vaccination efforts in South Africa should be more strictly targeted at vulnerable groups, Madhi said. “We need to ensure that at least 90% of people over the age of 50 are vaccinated.” And when the next variant comes along, don’t panic just because the number of infections rises, because the rise will be inevitable.

Instead, government officials should pay close attention to the “much less likely” scenario of a rise in severe illness and deaths.